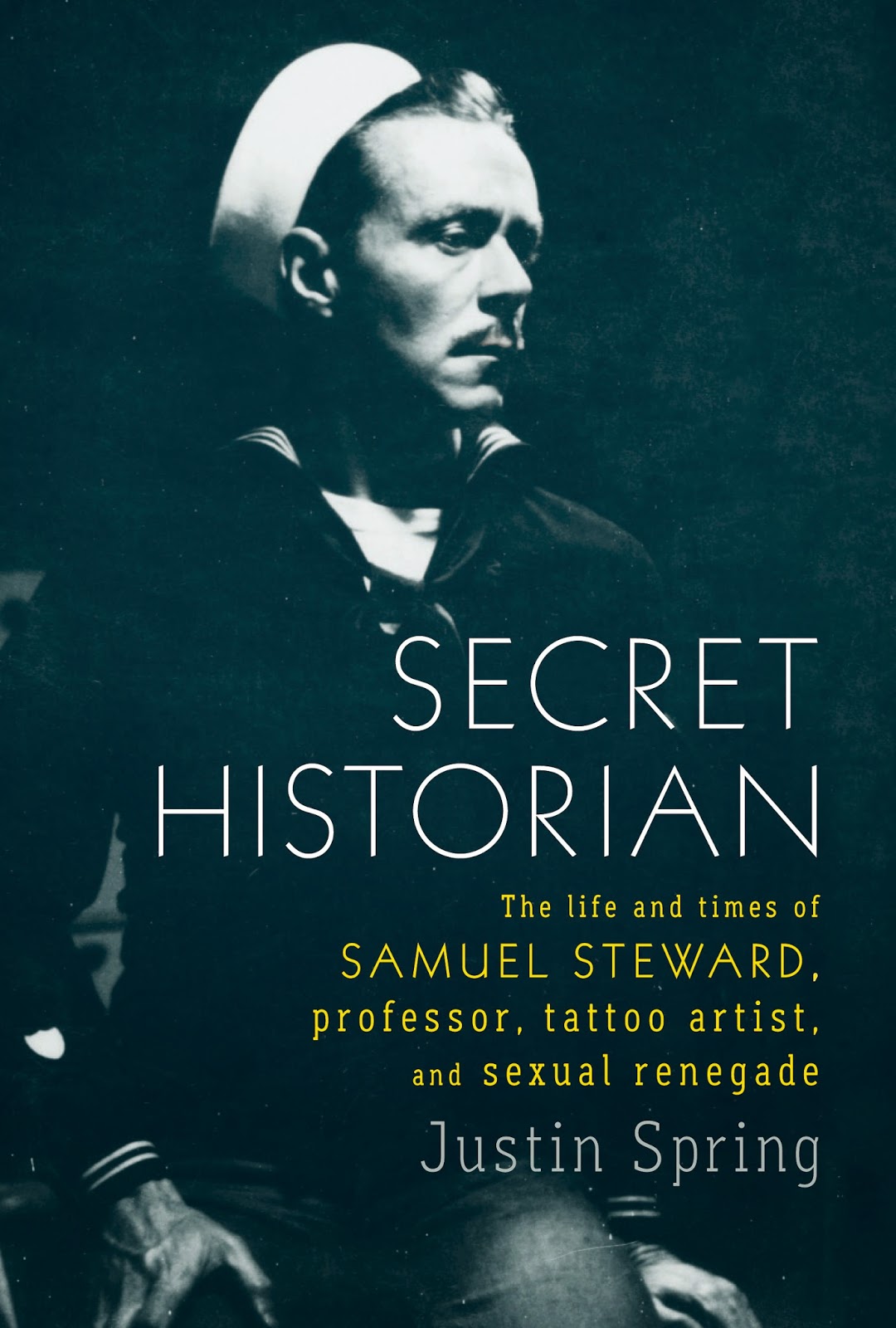 The title is not the half of it. Steward was the polymath to end all polymaths. He was a poet who made a career in academia, teaching English at DePaul and Loyola Universities (Steward held a PhD in English), but used the name Phil Sparrow when he began a career as a tattoo artist (he used a pseudonym so as not to jeopardize his teaching position). Steward became addicted to the use of pseudonyms. As the author of gay S&M pulp fiction over a period of more than 30 years, he went by Phil Andros (among many others), providing eager readers with astonishingly literate porn. When the Hells Angels in Oakland, CA, used him as their official tattoo artist, they called him Doc Sparrow. Readers of his articles in underground newspapers and magazines knew him as Ward Stames (an anagram of Sam Steward). And most of these circles of friends were completely ignorant of each other. Suffice it to say that the Hells Angels were unaware that their resident tattoo artist had once been Thornton Wilder's lover.

To a close circle of prominent artistic friends like Paul Cadmus, Gertrude Stein, Alice B. Toklas, Christopher Isherwood, photographer George Platt Lynes and the like, he was known as Sammy. Thornton Wilder drafted the third act of Our Town during a brief affair with Steward in Zurich, Switzerland, upon their first meeting. Steward had a fling with avant-garde writer James Purdy when Purdy was still in his teens. In the early 1950s Steward made pornographic drawings, many of them based on his own Polaroid photographs, and some of his work was published in the trilingual Swiss homosexual journal Der Kreis (The Circle). Oh -- forgot to mention that he played a mean piano. 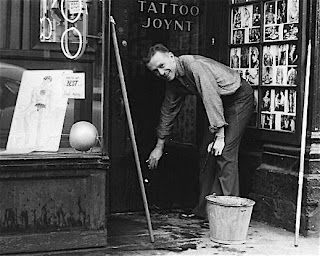 What a life this man led. As a teenager he seduced Rudolph Valentino (and kept some of the silent film actor’s pubic hair as a memento*), made love to a much older Lord Alfred Douglas (providing an amorous link to his hero Oscar Wilde), bedded Andre Gide’s Arab lover (with Gide’s full consent), and put the moves on Rock Hudson in a department store elevator. Steward kept a card file of every single sexual dalliance, complete with statistics and descriptions of acts performed. Steward was a protegé of Albert Kinsey, who flew in a partner to engage Steward in S&M sexual activity so that Kinsey could film it (assisted by Kinsey's wife!). In his spare time Steward reveled in abusing alcohol and drugs. By the age of 26, while he was a professor at Loyola, Steward was drinking more than a quart of alcohol a day, all the while never missing a class or appointment.

Spring’s book jumps to no conclusions and is assiduously non-judgmental. He simply relates what he discovered among the 80 boxes full of drawings, letters, photographs, sexual paraphernalia, manuscripts and other items made accessible to him by the executor of Steward’s estate. Included was that infamous green metal card catalog labeled “Stud File,” which contained meticulously documented index cards on every sexual partner that Steward had enjoyed over a 50 year period.

In an interview by Owen Keehnen in the last year of Steward’s life, Keehan described Steward as "a charmingly smutty Auntie Mame, only instead of life's being a banquet, it was a gay orgy in a tattoo parlor." Steward told Keehan why he gave up teaching English: "I was teaching a freshman class, and I had a little trick of firing a lot of questions at the class to find out what their background was. One of the questions was 'Who is Homer?' It was a mixed class of forty, and not one of them had ever heard of Homer. Can you imagine? Then I asked how many knew how to change a sparkplug, and about thirty hands went up. So that day I decided that maybe it was time for me to think about leaving higher education. I wanted to get as far away as I could. That was tattooing. The mysterious and dark side of tattooing attracted me as well."

*This incident is worthy of its own post. Rudolph Valentino, the silent film heartthrob of countless women, had been called a "pink powder puff" in the Chicago Tribune, a reference to his effeminate mannerisms. Valentino headed to Chicago by train to challenge the reporter to a duel (the writer never showed up) and was then on his way back to California when he stopped for an overnight at a hotel in Columbus, Ohio (July 24, 1926). Valentino was registered incognito, under his real name. Steward, who was living at his aunt's boarding house in Columbus, was an avid collector of autographs, and he got tipped off by a friend who worked at the hotel. Steward, who had celebrated his 17th birthday the day before, knocked on Valentino's door and got his autograph. Their collective gaydar must have been working overtime, because Valentino asked Steward, "Is there anything else you want?" Steward replied, "Yes. You!" Valentino obliged, and Steward kept a scrap of Valentino's pubic hair in a monstrance(!) by his bed for the rest of his life. Steward had not yet converted to Catholicism (1936; he left the church 18 months later, when he came to realize that no one with honesty could be both a Catholic and a homosexual); he was raised Methodist, and his father had taught Sunday School in a Methodist Church for 20 years. Tragically, within a month Valentino died of a ruptured appendix at age thirty-one. Steward's first published book, Pan and the Fire-Bird (1930), a collection of poems and short stories, contained Steward's tribute to Valentino, a poem titled "Libation to a Dead God."
Posted by Terry at 12:28 AM 4 comments: 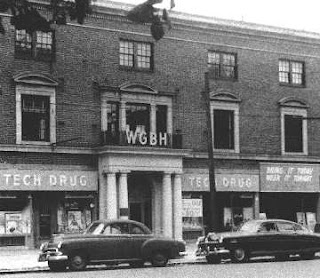 Hartford Gunn was the founding president of the Public Broadcasting Service (PBS), but he was most proud of his success in putting into place the system that connected the PBS network by domestic satellite.

A pioneer in educational television, Gunn (1927-1986) was responsible for getting WGBH radio on the air in Boston in 1951, followed by WGBH-TV in 1955. The station flourished during the 1960s, and Gunn was chosen to head the new Public Broadcasting Service in 1970. Gunn had come to WGBH fresh out of Harvard Business School, at the age of 25, following military service. It was his first civilian full-time job.

Gunn (photo at right) as a new hire at WGBH Boston.

In the dozen years he led the Boston station, Gunn moved it into the front ranks of public broadcasting, positioning it to be one of the nation’s top two public stations. In the course of those years, Gunn created the first interconnected regional network (Eastern Educational Television Network, 1960) while working to assist communities in activating their public broadcasting licenses. He goaded National Educational Television (1954-1970) into adopting higher technical standards, including a major shift into color television.

While at PBS he led the planning for the satellite distribution system that is in place today. While others concentrated on programming, Gunn pushed for more sophisticated technical expertise to bring public television into the living rooms of every American.

Gunn  laboriously testified before state legislatures and the U.S. congress to get a public television network off the ground. During his presidency of PBS, he survived some acrimonious confrontations with the Nixon administration. The hiring of Sander Vanocur and Robert MacNeil* as principal correspondents for NPACT (National Public Affairs Center for Television) greatly disturbed President Nixon, who saw it as "the last straw" and demanded that all funds for public television be cut immediately. It was Gunn and the folks at PBS who prevailed. Note: The influential “MacNeil/Lehrer Report” aired until MacNeil retired in 1995; it lives on as the PBS NewsHour, and MacNeil is still one of the primary producers.

Gunn was a true “techie” and a serious audiophile, indulging his lifelong interest in classical music. While serving as senior vice-president and general manager of KCET in Los Angeles, he kept a 42-ft. Westsail (the twin of a sail boat owned by his colleague Walter Cronkite) at Marina Del Ray, CA. It was my great fortune to spend extended time on this boat, listening to Gunn as he regaled me with stories of the early days of public broadcasting. Note: the sound system on that boat could have filled a movie palace! A lifelong bachelor, Hartford lived a quiet, discrete homosexual private life.

Gunn went on to serve as vice-president of program development for COMSAT, based in Washington, DC. During that time he moved to nearby Annapolis, MD, where he built a waterfront home with a dock for his sailboat. The equipment to supply the media for his home in Annapolis occupied an entire room, an extravagant indulgence in the early 1980s. At COMSAT, he was largely responsible for setting up the first national satellite-to-home television network in the United States.

Unfortunately, it was discovered that he suffered from a rare form of thyroid cancer, which was treated by radiation, chemotherapy and unsuccessful surgery. He died in Boston at the age of 59, on January 2, 1986. His legacy was carried on by the Hartford Gunn Institute, first based in Illinois, which assisted in developing fundamental plans for building the second generation of public telecommunications.

The 21" Classroom goes on the air at WGBH-TV: 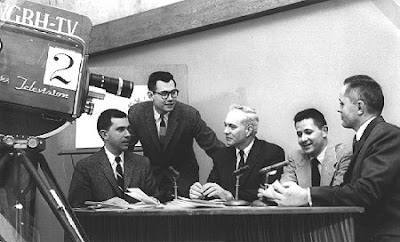 *Robert MacNeil, who has a gay son, famously took part in a panel discussion of news anchors for the 1993 convention of the National Lesbian and Gay Journalists Association. MacNeil, who was once an aspiring actor and playwright, enjoys following the career of his son Ian (born 1960), a set designer who recently won a 2009 Tony Award for Best Scenic Design of a Musical for Billy Elliot: The Musical. In a 1994 episode of The MacNeil/Lehrer NewsHour, father and son openly discussed their relationship.
Posted by Terry at 2:00 AM No comments: