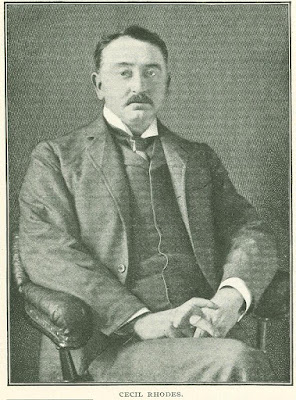 Cecil Rhodes (1853-1902) was an English-born South African who was a co-founder of the De Beers diamond company as well as the honored namesake of the southern African country of Rhodesia (today’s Malawi, Zimbabwe and Zambia). Notably, upon his death he bequeathed funding to establish the Rhodes Scholarship program, which to this day is endowed by his estate. During his short life he was active as a businessman, politician and philanthropist who lived and dreamed on a grand scale.

Rhodes moved from England to South Africa while still a teenager in hopes that a better climate would ease his asthma. He was frail and also suffered heart problems. His brother Herbert lived there, having made a failed attempt at farming cotton. Moving on, with outside partners they bought up southern African diamond and gold deposits and formed the De Beers company in 1888. Rhodes was named chairman of the new enterprise.

Cecil was a British Imperialist who thought the United States would eventually rejoin Britain. He believed that in the near future the United Kingdom (including Canada, Australia, Ireland, New Zealand and Cape Colony), the USA, and Germany together would dominate the world and ensure peace. He wrote of the British, “I contend that we are the finest race in the world, and that the more of the world we inhabit the better it is for the human race...To be born English is to win first prize in the lottery of life.”

He was a friend of Jan Hofmeyr, leader of the Afrikaner Bond, and it was largely because of Afrikaner support that Rhodes became Prime Minister of the Cape Colony (1890-1896), a British controlled area of southern Africa. Rhodes was also president of the British South Africa Company. Politically, Rhodes advocated greater self-government for the Cape Colony, in line with his preference for the empire to be controlled by local settlers and politicians rather than by London. Rhodes was also a racist, an early architect of apartheid, the separation of blacks and whites.

As for his private life, Rhodes employed a number of robust young male companions, ostensibly as bodyguards and secretaries.  He did not have relationships with any member of the opposite sex, platonic or otherwise. Neville Pickering, the first secretary of the De Beers company, has been singled out as Rhodes's first significant male lover. When Pickering – young, fit and extraordinarily handsome – turned 25, Rhodes returned from serious business negotiations for Pickering's birthday in 1882. On that occasion, Rhodes drew up a new will leaving his estate to Pickering; the new will read simply: “I, C.J. Rhodes, being of sound mind, leave my worldly wealth to N.E. Pickering.”  When Pickering later suffered a riding accident, Rhodes nursed him faithfully for six weeks, refusing even to answer telegrams concerning his business interests. Pickering died in Rhodes's arms, and at his funeral, Rhodes was said to have wept “with fervor”. Rhodes had passed up a deal worth millions to be at his companion’s bedside during his final days.

Pickering was replaced by Henry Latham Currey, who had become Rhodes's private secretary in 1884. When Currey became engaged to be married in 1894, Rhodes was mortified, outraged and immediately ended their relationship. Over the years Rhodes accumulated a shifting entourage of fit young men, known as “Rhodes’s lambs,” almost always blonde haired and blue-eyed athletic types.

Rhodes later maintained a significant relationship with Scotsman Sir Leander Starr Jameson (a Baronet known as “Dr. Jim”), British administrator of the lands constituting present-day Zimbabwe, who ended up nursing Cecil Rhodes during his final illness. Jameson was a trustee of his estate and residuary beneficiary of his will, which allowed him to continue living in Rhodes's mansion after his death. Although Jameson died in England in 1917, after the conclusion if WW I his body was transferred to a mountaintop grave in 1920 beside that of Rhodes in Rhodesia (present-day Zimbabwe). Tellingly, Cecil Square is today one of the main gay cruising areas of Harare, the capital city of Zimbabwe.

Rhodes had died from heart failure in Cape Town at age 48. Upon his death he was one of the wealthiest men in the world, and his will established the Rhodes Scholarship, the world’s first international study scholarship, enabling male students to study at Oxford University. Rhodes's aims were to promote leadership marked by public spirit and good character, and to "render war impossible" by promoting friendship between the great powers. According to Rhodes’s will, applicants were restricted to men only – it was not until 1976 that women were allowed to apply, which went against Rhodes’s wishes. According to Rhodes’s guidelines for scholarship selection, “candidates must display a fondness for success in manly outdoor sports, such as football and cricket.” Of course. 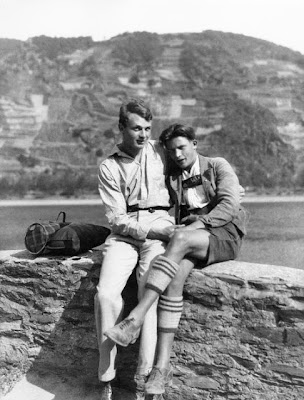 London-born poet, essayist and novelist Stephen Spender (1909-1995) delayed publication of his first novel, The Temple, for fifty-nine years – until 1988, when he was seventy-nine years old. The male protagonist has same-sex encounters in pre-War Germany. In Spender’s real life experience, which included living in Germany, he had a series of affairs with men, after which he married twice* and took about renouncing his gay past.

During the course of his life he morphed from homosexual (fell in love with Tony Hyndman in 1933, the two living as a same-sex couple 1935–36) to bisexual (married Inez Maria Pearn 1936-1939) to homophobic straight man (married to Jewish concert pianist Natasha Litvin from 1941 until his death).

Above: Spender photographed with his German pal Franz Büchner in 1929.

*Spender had two children; his daughter Lizzie married Australian drag icon Dame Edna (Barrie Humphries) in 1990, and his son Matthew wrote a memoir about his family.

October 2015 saw the publication of Matthew Spender’s memoir titled, “A House in St John’s Wood: In Search of My Parents”, in which Matthew described a party of intellectuals in post-WW II Paris where  Natasha, still newly married to Stephen, inquired as to the identity of an elegant young man talking to her husband.

"Don't you know?” the worldly Parisian replied. “That's Stephen's new lover.” Natasha promptly fainted, and a few days later she tried to throw herself off a train.

In 1955, Matthew overheard his father telling his mother he wanted to leave her and live with a new boyfriend in Japan.

Original: Whatever happens, I shall never be alone. I shall always have a boy, a railway fare, or a revolution.

Altered version: Whatever happens, I shall never be alone. I shall always have an affair, a railway fare, or a revolution.

Spender was so sensitive to being portrayed as gay that he sued David Leavitt for his novel, While England Sleeps. Spender claimed that Leavitt’s book was based on his life and charged that the gay scenes were over-the-top pornographic. They settled out of court in 1994, the year before Spender’s death. 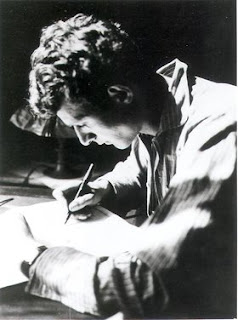 Spender secured his place among the Oxford poets with the publication of Twenty Poems (1930). He later co-edited Horizon (1939-1941) and Encounter (1953-1967) magazines. He left his post at Encounter magazine when he learned that is was being secretly financed by the U.S. Central Intelligence Agency (CIA). In 1965 he became the first non-American citizen to serve as Poet in Residence at the Library of Congress – his successor was James Dickey. Spender was Professor of English at University College, London, from 1970 through 1977.

At a 1984 ceremony commemorating the 40th Anniversary of D-day, President Ronald Reagan quoted from Spender's poem "The Truly Great":

Gentlemen, I look at you and think of the words of Stephen Spender's poem. You are men who in your "lives fought for life... and left the vivid air signed with your honor."
Posted by Terry at 3:57 AM 1 comment: