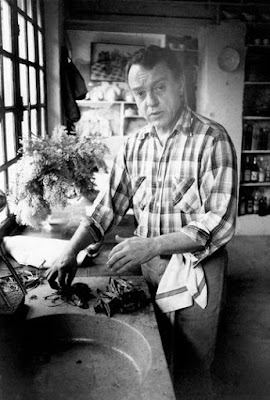 
There was a trio of influential gay male American chefs whose lives overlapped, spanning the entire twentieth century:

The least well-known of the three was Richard Olney. He was an advocate of  French cooking, but not in the grand manner. He promoted a far more relaxed country French cuisine. Olney was also a noted promoter of French wine from the Provence region. But unlike Beard and Claiborne, Olney directed his culinary empire from his home in Sollies-Toucas in Provence, France. An Iowa native, Mr. Olney left Brooklyn for France at the age of 24 and never moved back.

Two books published in the early 1970s established his career, “Simple French Food” and the “French Menu Cookbook”. Richard was obsessive about cooking with seasonal ingredients and making correct wine pairings with food. Olney was also the editor of Time Life’s influential series “The Good Cook”, the first cookbooks that used minimalist step-by-step photographs to explain traditional cooking technique. Published from 1978-1980, the complete set numbered 28 volumes, each edited by Olney.

Olney’s best known disciple is Alice Waters (b. 1944) of the famed Chez Panisse restaurant in Berkeley, California. She claimed that, without Richard's mentoring, she would not exist. As to his closely guarded personal life, Mr. Olney was the one-time lover of celebrity chef Jeremiah Tower (b. 1942), who worked for many years as chef at Chez Panisse before opening his own restaurant.

For the most part, however, Olney lived a hermit’s life on a hillside in a village inland from Toulon, where he dug a wine cellar by hand and built a brick cooking hearth in his kitchen. He slept in a tiny alcove off the kitchen (where his gardener confirmed that Olney had died in his sleep) and ate and entertained in good weather on a stone terrace under a grape arbor. To keep it "simple", he had no telephone, no car (didn't drive), no radio, no television.

He was a neighbor of Lucie “Lulu” Peyraud, a petite chef and vintner who just turned 100 last month. In 1994 Olney published “Lulu’s Provençal Table”, a book that extolled her masterful, earthy cooking and wine production from her Domaine Tempier vineyard. Lulu promoted French cuisine as a way of living – not just eating. Food writer Steve Hoffman said that Olney “wished to teach us how cooking could be a path to well-being, a blessed pagan state of sensual, aesthetic and intelligent fulfillment.” Olney learned what he knew about French country cooking from Lulu, and his book about her has become a collector’s item.
Posted by Terry at 2:41 PM No comments: 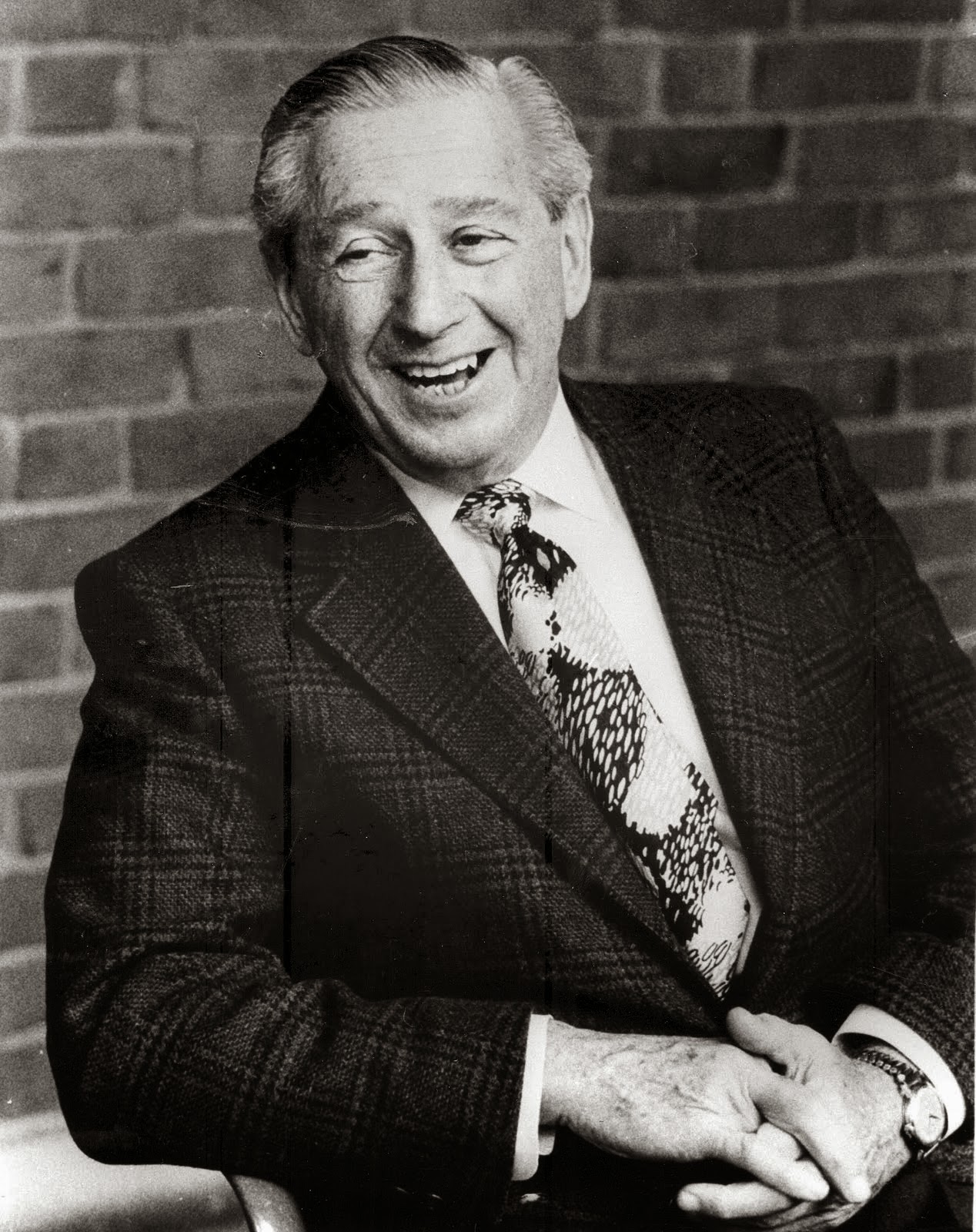 Automotive industry heir Walter P. Chrysler Jr. (1909-1988) was the son of a man who had amassed a great fortune in founding the Chrysler Corporation. Walter Jr., knowing that he would inherit vast sums of money, could thus indulge his passion for collecting art, an obsession that resulted in transforming a minor provincial museum in Norfolk, Va., into one of the nation’s best, the Chrysler Museum of Art.

Walter Jr., who was a theatrical producer*, hung out in locations that had strong ties to the homosexual community. Although throughout his life he attempted to appear as a straight man, he had a home in Key West and displayed his growing art collection in Provincetown, Massachusetts, in a 19th-century church building he bought from the Methodists. The museum was nicknamed by locals as “The First Church of Chrysler” or “St. Walter’s”. The structure today serves as the Provincetown library.

*Among many others, he produced New Faces of 1952, which launched the careers of Eartha Kitt, Paul Lynde and Carol Lawrence.  Chrysler also produced the film "The Joe Louis Story."


In 1956, Chrysler retired from business to devote his full-time attention to the arts. Soon thereafter an article appeared in Confidential magazine that exposed his homosexual activity, and there had been persistent reports that he had been discharged from the Navy because “he was found to be homosexual.” It was extraordinary for a healthy man to be discharged from the military during wartime.* Again, according to Earle, “That Chrysler led something of a double life was widely acknowledged. The fact that he was gay was noted by many of those who knew him professionally and personally. As Chrysler biographer Vincent Cursio mentioned, ‘...in 1938 there was enormous social pressure on gay men to marry and give the appearance of living a normal life.’ ” Walter Jr. married twice, but there were no children. His first wife, Peggy Sykes, whose marriage to Chrysler lasted less than two years, left a man with few friends. She noted that the major love of his life was "art collecting." Peggy stopped inviting people to their home for socializing, because Chrysler would usually freeze out everyone, often refusing even to speak to their guests. Further alienation arose from his tendency to pay bills late, or not at all.

While a 14-year-old boy attending prep school, Walter Jr. purchased his first painting, a watercolor nude, with $350 in birthday money from his father. A dorm master considered the piece lewd and destroyed it – a Renoir! Undeterred, he continued to collect art, but there were scandals along the way. Many of the artworks he purchased and displayed were called out as fakes. For that reason, Newport, RI, refused to accept the gift of his collection, which had outgrown its home in Provincetown. In spite of such notoriety, Walter Jr. had impressive credentials – he had been a key figure in the creation of the Museum of Modern Art in New York City. However, much of his personal collection had to be stored in warehouses and lent out to museums across the country. 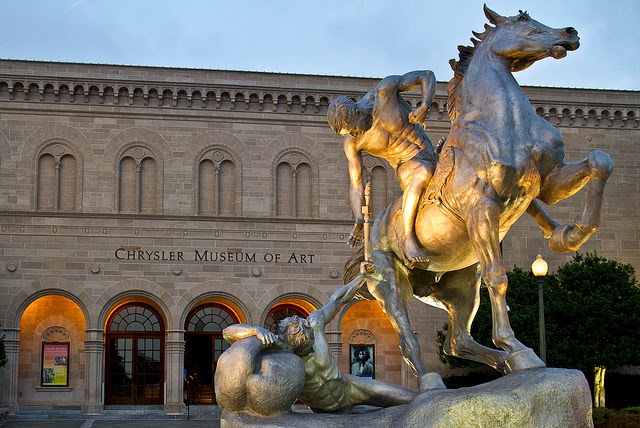 Walter Jr.’s second wife was from Norfolk, and he had himself been a Navy man stationed there, so he ultimately found success in 1971 when he presented Norfolk, Va., with his impressive collection of 10,000 art objects, to be housed in the Norfolk Academy of Arts and Sciences, which had been built in 1932. A condition of the gift was that the academy be renamed the Chrysler Museum of Art. As New York Times art critic John Russell said, "It would be difficult to spend time in the Chrysler Museum in Norfolk, Virginia, and not come away convinced that the most underrated American art collector of the past 50 years and more was the late Walter P. Chrysler, Jr." Chrysler's collection is especially strong in art glass and incorporates a large body of Tiffany lamps. Louis Comfort Tiffany had been his neighbor when Walter Jr. was growing up on Long Island. 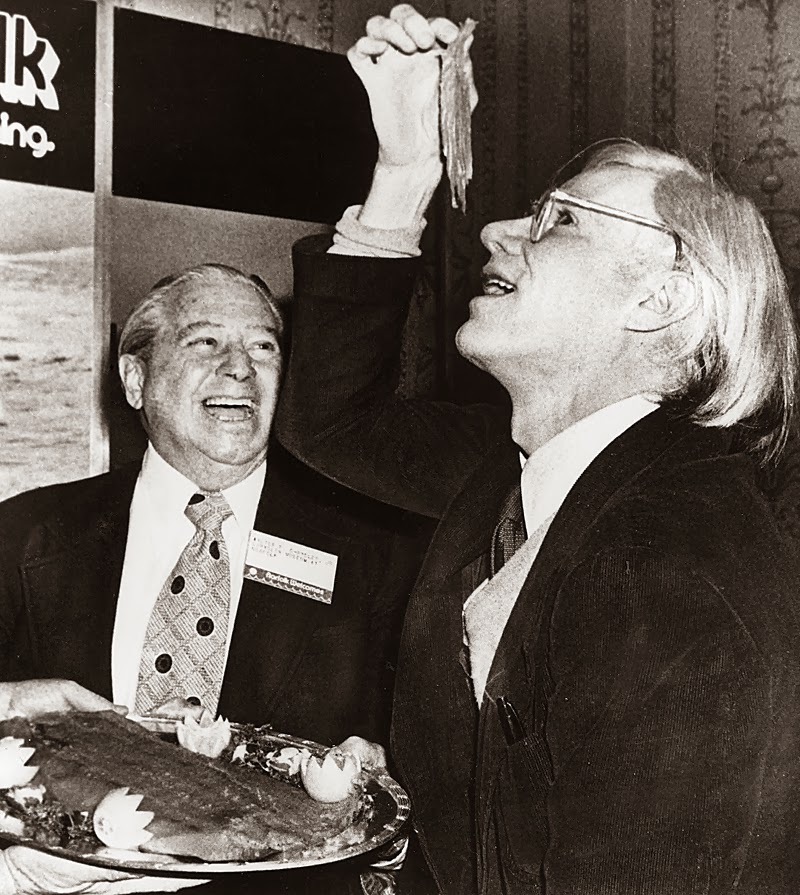 Update: New photos of of the North Wales estate have become available, so I added them to this previous post.

Your blogger’s determined effort to enjoy a glorious fall day resulted in a drive to Warrenton, VA, a sleepy town in the center of fox hunting country. A brief conversation with locals informed me that North Wales, the estate formerly owned by Walter P. Chrysler Jr., had been sold recently. This morning I enjoyed researching the estate’s history to provide an update to this blog post about Mr. Chrysler. 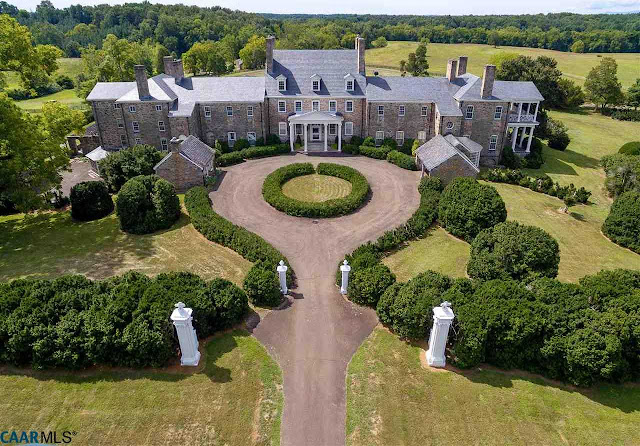 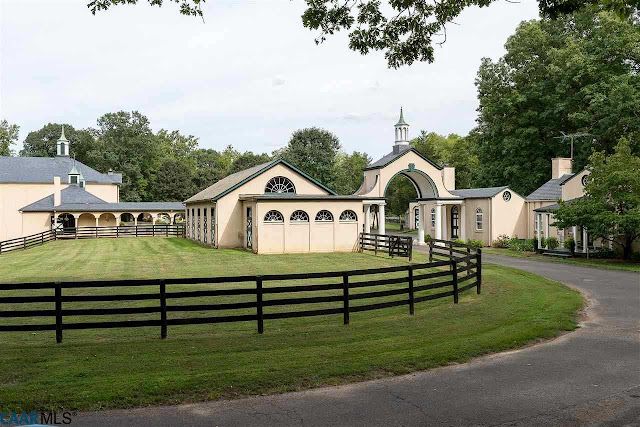 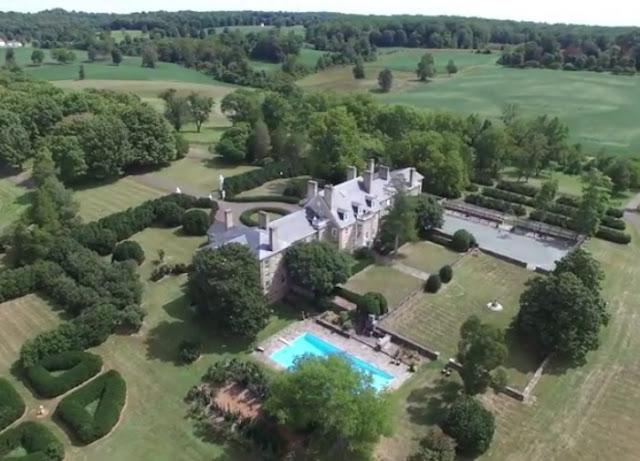 In 1941, one year after his father’s death, Walter P. Chrysler Jr. used a portion of his recent inheritance to buy North Wales Farm (above), a fabled estate just outside Warrenton, Va., 45 miles west of Washington, DC (and a mere 30 miles from the home of your blogger).  With a purchase price of $175,000, the property soon saw further expansion and improvements. The recently divorced Chrysler spent an additional $7.5 million on the estate, expanding the property to 4,200 acres. At the epicenter was a 56-room stone mansion (38,500 sq. ft. including 22 bedrooms, 17 baths and 16 fireplaces), formal gardens, tennis courts, ponds, bridges, fountains, not to mention miles of stone and board fences enclosing an estate that boasted more than 35 out-buildings. 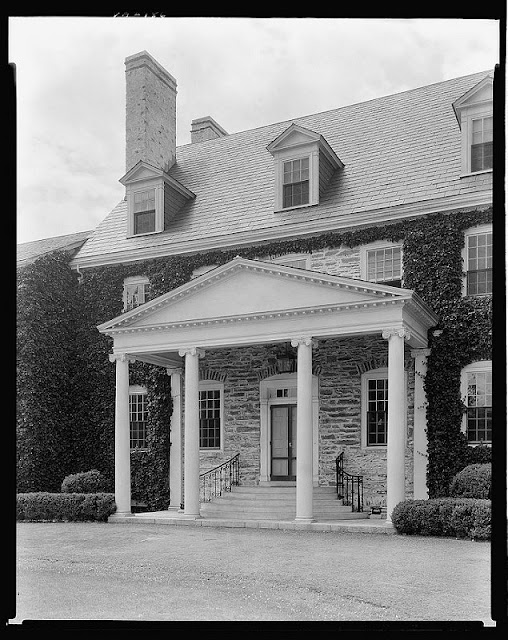 The oldest part of the house, dating back to 1776, was a mere 5-bay two-story stone manor house (above) built for William Allason. In 1914 North Wales was bought by Edward M. Weld of New York. In 1930 Fortune magazine noted that Weld "stretched the house to 37 rooms, built a riding stable of 40 stalls and a six furlong race track, stocked the cellar with $50,000 worth of liquors and went broke." North Wales was then converted to an exclusive private club for the fox hunting and horse breeding set. In 1941 Chrysler returned the mansion and estate grounds to private use. At the time of Chrysler's residency the expanded mansion numbered more than 50 rooms, providing plenty of space for Chrysler to display highlights of his vast art collection of Monets, Picassos, Rodins, Braques, Matisses and the like. He then set about constructing more than 35 miles of internal, paved roads while adding a conservatory to the mansion (for his mother’s orchids), a swimming pool, an arcaded entrance to the equestrian center and a brick isolation barn. 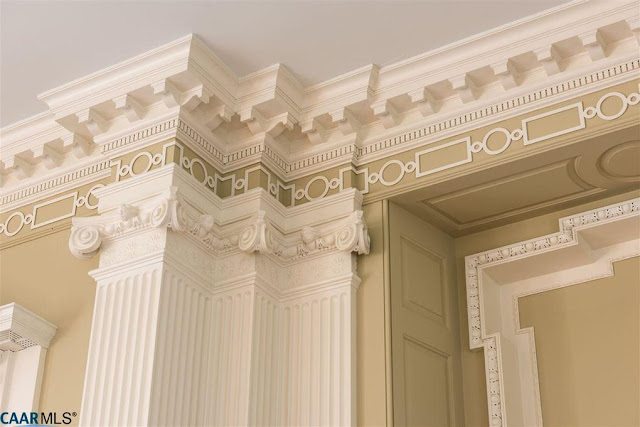 Under Chrysler’s ownership, North Wales, with sweeping views of the Blue Ridge mountains, essentially functioned as its own community, home to a commercial poultry operation and various agricultural enterprises. Although he also raised cattle and sheep, Chrysler ensured that the estate retained its fame as a center for fox hunting and thoroughbred horse breeding. The splendidly furnished mansion was the site of many lavish charity events. Chrysler remarried in 1945, and his new bride used North Wales Farm as a center for raising champion long-haired Chihuahuas. However, in 1957 Chrysler sold North Wales Farm, a year after he retired from business in order to devote himself full time to the arts. The following year he opened the Chrysler Museum of Art in Provincetown, Massachusetts, in a former church. 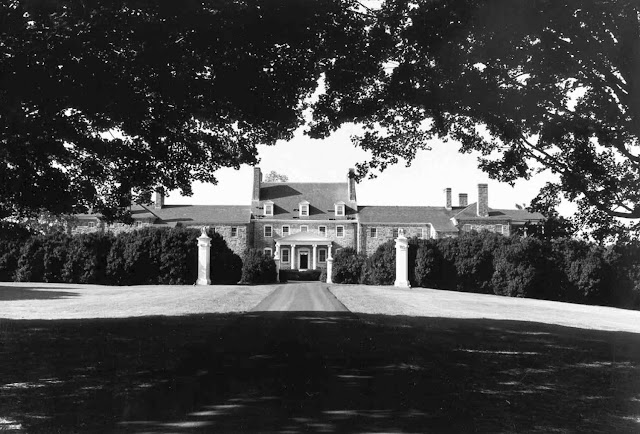 Now reduced to 1,470 acres, North Wales was purchased in 2014 by former Goldman Sachs partner David B. Ford of Greenwich, CT, for $21 million. The property is listed on the National Register of Historic Places. Mr. Ford had made headlines eight years earlier when he purchased the 30,000 sq. ft. French neoclassical-style Miramar mansion in Newport, RI, built in 1915 for the widow of Philadelphia mogul George Widener. Ford currently owns both mansions, all the better to avoid a cramped lifestyle (38,500 + 30,000 = 68,500 sq. ft. of luxe living). Impressive. Ford is also Director of the Philadelphia Orchestra Association and Chairman of the National Audubon Society.
Posted by Terry at 8:24 PM 11 comments: