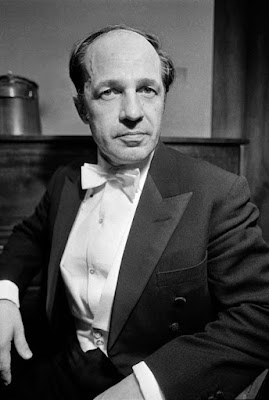 
When the great French composer, conductor and pianist Pierre Boulez (1925-2016) died at the age of 90 at his home in Baden Baden last month, there was much Internet chatter about his sexual orientation. Obituaries in major newspapers and journals mentioned that Boulez was “tightly guarded” about his personal life, but music critic Norman Lebrecht, who knew him for decades, stated that Mr. Boulez was gay. Boulez was extremely closeted, often introducing Hans Messner, his German lover of more than fifty years, as his “valet.” That Boulez (the “z” is not silent) was homosexual was one of the music world’s worst kept secrets.

Mr. Boulez enjoyed a first tier international career, holding conducting positions in France, Germany, Austria, Switzerland, England and the United States, and his numerous recordings earned him twenty-six Grammy Awards. Boulez did not use a baton, using only his hands to conduct, in the fashion of Dimitri Mitropoulos, Leopold Stokowski and fellow Frenchman  Georges Prêtre.

As an opera conductor, Pierre Boulez was most famously associated with Bayreuth, conducting Parsifal and the Ring Cycle. In Paris he founded the Institut de Recherche et Coordination Acoustique/Musique (IRCAM) at the Centre Pompidou and the Ensemble Intercontemporain (EIC). In the United States he was conductor of the Cleveland Orchestra, Chicago Symphony and the New York Philharmonic and was composer-in-residence at Carnegie Hall (1999-2003).

As a composer, he was a champion of the avant-garde, writing atonal, electronic and serial music, although in later years composition took a back seat to conducting. He championed twentieth century composers, programming major works by Berg, Mahler, Debussy, Schoenberg, Stravinsky, Bartok, Webern and Varèse.

After a 2012 eye operation left him with impaired vision, he cancelled conducting engagements, and a shoulder injury from a fall kept him from attending the many 90th birthday celebrations held throughout the world in 2015. Both Columbia Records and Deutsche Grammophon issued limited edition box sets (67 CDs and 44 CDs, respectively) of his recordings in honor of his 90th birthday. Last month BBC Four broadcast an hour-long documentary, “Pierre Boulez at the BBC: Master and Maverick.”
Posted by Terry at 3:38 AM 10 comments:

Multi-talented Roger Edens (1905-1970) was a key player in the creation of classic MGM musicals from the Golden Age of Hollywood. Edens was a part of Arthur Freed’s production unit derisively called “Freed's Fairies”: director George Cukor, prop master Edwin Willis and Roger Edens (although Freed himself was not gay). Edens brought a unique combination to MGM's movie musicals as an arranger, songwriter, musical supervisor, composer and producer.

Although born in Texas, Edens grew up in Richmond, VA. He worked as a pit pianist in NYC during the 1920s. When Ethel Merman’s pianist left Girl Crazy in 1932, Edens was hired as his replacement. Merman was so impressed that she hired Edens as pianist/arranger for her nightclub act and brought him to Hollywood; but when Merman returned to Broadway, Edens stayed on in Los Angeles. Hired by MGM as Arthur Freed’s musical supervisor and associate producer, he became part of the legendary "Freed Unit", creating some of the finest ever Hollywood musicals: An American in Paris, Singin' in the Rain, Meet Me in St. Louis, Babes in Arms, Easter Parade, On the Town, Showboat, Royal Wedding and The Bandwagon. 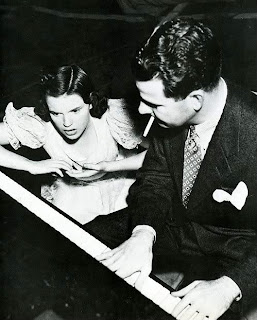 At a time when known homosexuality was a death blow to a career in Hollywood, Edens managed to keep his under wraps. After a brief marriage ended in divorce, Edens appeared in public with his talented friend and co-worker Kay Thompson in an effort to throw others off the scent. Kay Thompson was a vocal arranger at MGM. By the time he worked with Judy Garland (shown in photo with Edens), he was living as a gay man.

Roger Edens became the musical mentor to Judy Garland and was an uncredited coach in almost all of her musical films. Because of his exclusive contract with MGM, Edens was not credited with Garland's “Born in a Trunk,” the landmark sequence in the Warner Brothers production of A Star Is Born (1954). Edens nurtured and established a creative relationship and friendship with Garland that would last for more than three decades. 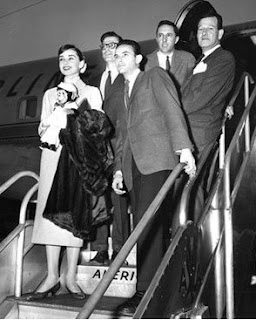 When MGM cut back on musical productions, Edens continued to work at other studios, producing Funny Face (1957) and Jumbo (1962) while breaking into television work. His final screen assignment was as associate producer of Hello, Dolly! (1969), directed by Gene Kelly. Edens coached Katherine Hepburn for her Broadway musical stage debut in Coco (1969).

A year later Roger Edens died of lung cancer at the age of 64. He was interred in a columbarium at Westwood Memorial Park’s Sanctuary of Remembrance, a resting place for Hollywood royalty in Los Angeles (just off Wilshire Boulevard, east of I-405 [San Diego Freeway]). His eternal neighbors include Eddie Albert, Burt Lancaster, Eve Arden, Fanny Brice, Janet Leigh, Sammy Cahn, Jack Lemmon, Truman Capote, Oscar Levant, Eva Gabor and Merv Griffin (and on and on). Not to mention Natalie Wood, Marilyn Monroe and Billy Wilder.
Posted by Terry at 12:04 AM 1 comment: