2019 is the 400th anniversary of the birth of Johann Rosenmüller (1619-1684), an important baroque composer of instrumental and sacred vocal music in Germany and Italy at the middle of the seventeenth century. He was an organist, trombonist, teacher and composer who survived a homosexual scandal in Leipzig and escaped to Italy, where he resurrected a major career in Venice.

After graduating from the University of Leipzig, he became the assistant to the Thomasschule Cantor (director of music). Working his way up, he was next appointed organist at the Nicolaikirche, one of the three important churches in the city. As his boss became increasingly ill, Rosenmüller was assured he would be next in line for the position of Cantor at the Thomasschule, the same position that Johann Sebastian Bach would assume seventy years later. In 1655, however, Rosenmüller was arrested on charges of seducing several of his choir boys; he subsequently escaped from jail and fled to Venice, where he supported himself by playing trombone at St. Mark’s Basilica.


Some years later, he attained a position as maestro di coro (master of the chorus), at the Ospedale della Pietà, an orphanage school that featured an acclaimed all-girl* choir and orchestra that performed liturgical functions and gave concerts on Sunday afternoons. A generation later Antonio Vivaldi famously directed the musical activities at this orphanage school, elevating the female choir and orchestra to world-wide fame, attracting many tourists. Today the Metropole Hotel is the former music building, and guides point out (erroneously) that the church to the left of the hotel was the church where Vivaldi’s girls performed. In fact, the church was built many years after Vivaldi’s death.


*Many of these girls were the illegitimate children of Venetian nobles, who lavishly supported the school. The girls performed behind screens so that their “comeliness would not distract those in attendance”. Your blogger surmises that a more plausible cause might have been to hide any physical resemblance of the orphans to their noble (actual) parents. Scandal!


Rosenmüller’s sacred compositions reflected an obvious Italian influence, and students who came from Germany to study with him took these works back to their homeland, thus introducing Italian musician idioms to Germany. In 1682, considering that the coast was clear after an interval of nearly 30 years, he left Italy and returned to his homeland, Germany, where he became court composer for a duke at Wolfenbüttel in Lower Saxony. He died there in 1684, at age 65. In the annals of classical music history, Rosenmüller is hardly a household word, but his name is frequently mentioned as the man who held two posts eventually filled by much more famous men, J. S. Bach and Antonio Vivaldi. Not to mention the well-documented homosexual scandal.

Graeme Skinner: “Who's Who in Gay and Lesbian History from Antiquity to World War II”. 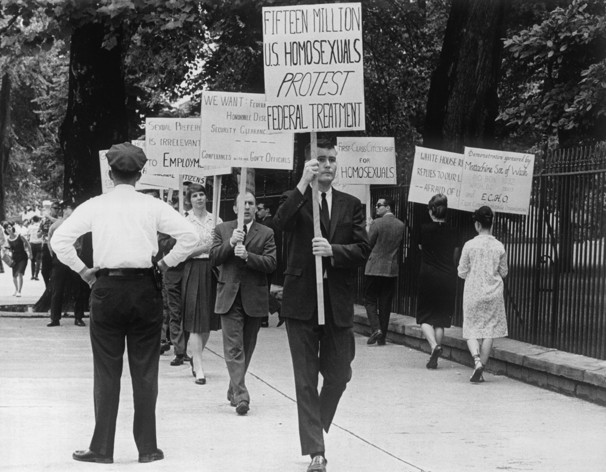 Kameny picketing in front of the White House in 1965 (he is second in line, immediately to the right of the policeman's elbow, his face partially obscured).


Gay rights activist Frank Kameny (1925-2011) died eight years ago at age 86, in Washington, DC, not far from your blogger's home. He was crusty, in-your-face stubborn and possessed of a one track mind: equality for homosexuals. He was out, loud and proud 24 hours a day. I consider him the most important person I’ve ever entertained in my home, although he was a difficult guest. Frank was not capable of chit-chat or polite discourse. Nevertheless, we all owe this man, big time.

Born and raised in NYC, Kameny saw combat as an Army soldier in Europe during WW II. After earning a doctorate degree in astronomy from Harvard University, he went to work as an astronomer for the US Army map service in the 1950s and was fired in 1957 after authorities discovered he was homosexual. Kameny fought the firing and appealed his case to the US Supreme Court, becoming the first known gay person to file a homosexual-related case before the high court. The Supreme Court upheld the lower court ruling against Kameny and declined to hear the case, but Kameny’s decision to appeal through the court system motivated him to become a lifelong advocate for LGBT* equality.

*Actually, he disliked the moniker LGBT. He used the word "gay" as an all inclusive term. An article in the current issue of The  Atlantic magazine ("Don't Call Me LGBTQ" by Jonathan Rauch) proposes using the single letter "Q" as a replacement for LGBTQ, countering that the procession of letters has become too unwieldy. So stay tuned.

1961: Kameny and Jack Nichols co-founded the Mattachine Society of Washington, an organization that embraced aggressive action for the civil rights of homosexuals. In 1963 the group was the subject of Congressional hearings over its right to solicit funds. 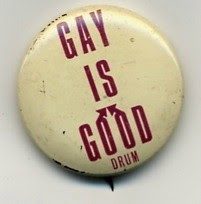 1968: He gave us the phrase ''Gay is Good'' back when homosexuality and shame were partners. The Library of Congress archives contain this original example.

1973: The American Psychiatric Association stopped classifying homosexuality as a mental disorder, and Kameny had played a major role in that change. Kameny “crashed the APA conference in Washington DC, seized the microphone and shouted, ‘We’re not the problem. You’re the problem!’” He and lesbian activist Barbara Gittings were the first recipients of the American Psychiatric Association's John M. Fryer, M.D., Award, recognizing their contribution to fighting against that association’s earlier homophobia.

2006: the Human Rights Campaign presented him with the National Capital Area Leadership Award. That same year the Library of Congress accepted 77,000 items from his collected papers. 2009: President Obama signed an executive order that granted benefits to the same-sex partners of federal employees; Kameny was by his side in the Oval Office and received a pen from Obama. Also that year, he received a formal apology from the U.S. government for his treatment all those years ago, and Kameny’s home in Washington DC was designated a Historic Landmark by the District of Columbia’s Historic Preservation Review Board.

By his example, perseverance and sacrifice, he showed Americans what courage looked like. 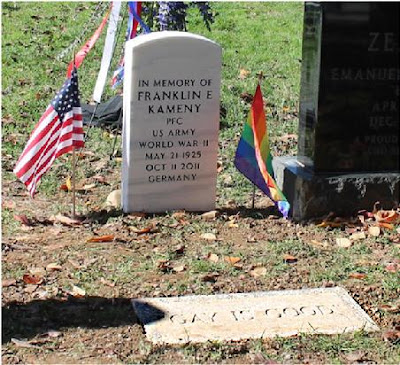 Note: Controversy followed Kameny even after his death. After cremation, his legal heir Timothy Clark took possession of the ashes. Because the estate did not have financial resources to purchase a memorial, a gay charitable group known as Helping Our Brothers and Sisters purchased a plot at DC's Congressional Cemetery* and erected head and foot stones, which have become a gay tourist attraction. But Clark would not allow interment of the ashes to take place until ownership of the plot was signed over to Kameny's estate. To this day the grave remains empty, and Clark interred Kameny's ashes at an undisclosed location, requesting the public to respect his "wishes and privacy."

*The grave's location is right behind that of Leonard Matlovich, a gay Vietnam veteran whose tombstone bears the epitaph: When I was in the military they gave me a medal for killing two men and a discharge for loving one. Other gay rights activists and members of American Veterans for Equal Rights have chosen to be buried in this cemetery.
Posted by Terry at 4:41 AM 3 comments: