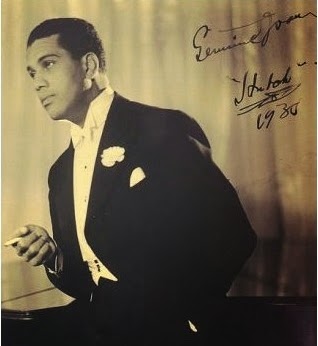 When the hit television series Downton Abbey* added Jack Ross, a jazz cabaret singer, to its cast, few viewers on this side of the pond realized that the role of Jack Ross was based on a real-life personage, Leslie “Hutch” Hutchinson (1900-1969), an immensely talented black man who made a fortune as a cabaret singer and pianist, while insinuating himself into the upper echelons of high society in Paris and London. He moved about in a chauffeur-driven Rolls Royce to and from his grand house in Hampstead, exquisitely dressed in custom-tailored finery. Equally spectacular was his crash landing after falling out of favor, ending his life on the cusp of penury.

*Your blogger must be the last person on earth who has never seen a single episode.

Hutch was a philanderer, seducer, gigolo and a pathological liar, constantly reinventing himself and overstating his credentials. He was also handsome, talented, devastatingly charming and notoriously well endowed – not to mention rabidly bisexual, possessed of a voracious sexual appetite. Among his male lovers were Cole Porter and Ivor Novello; among females he was intimate with Tallulah Bankhead and Merle Oberon, not to mention nobles, royals and the merely rich, but it was his torrid affair with Countess Edwina Mountbatten (wife of bisexual Lord Louis Mounbatten*) that brought him down. Afterward, although Edwina’s name was cleared (the plaintiffs wrongly assumed that the negro with whom she was having sexual relations was singer Paul Robeson), Buckingham Palace refused to have Hutch participate in Royal Command performances, and Lord Beaverbrook insisted that Hutch's name was never to be mentioned again in any of his newspapers. As a result, Hutch’s professional and social decline was precipitous.

*Lord Louis was involved in extramarital affairs of his own and was none too particular about the gender. Behind his back his whispered nickname was "Lord Mountbottom."


Leslie Hutchinson was born of mixed parentage on the island of Grenada, making him a British citizen. He attended the best schools and was celebrated as a piano prodigy. While in his mid-teens his father sent him to study medicine in Nashville, TN, at one of the few schools that allowed black students, but his heart was not in it. He stole away to NYC, settling in Harlem, where he became a successful stride pianist; soon Fats Waller and Duke Ellington were included in his circle of friends, and among his patrons were the Vanderbilts, who hired him to play piano for private functions. One of the reasons he was not well known in the US is that he departed from NYC after a stay of only five years. 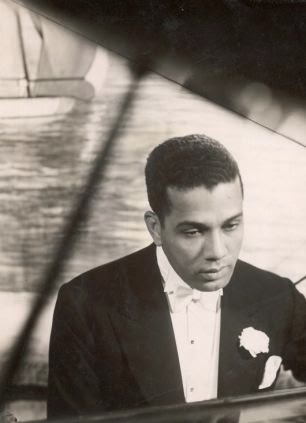 Hutch left New York for Paris, where he started his climb to the world of high society. He landed a residency at Joe Zelli's club, where he met Cole Porter, who was living in Paris at the time. But it was in London that his career reached its peak during the late twenties and thirties. Primarily just a pianist prior to settling into London, he began singing while accompanying himself on the piano. As a cabaret singer, he reigned supreme, much like Bobby Short in NYC a generation later. Hutch became a favorite cabaret singer and protégé of the then Prince of Wales (later King Edward VIII) and was regularly heard on BBC radio. During this time he was the highest-paid musical star in Britain.

Although Hutch had a wife and child at home, most visitors assumed that the woman of the house was his servant. A black Anglo-Chinese woman, wife Ella was always excluded from Hutch’s professional and social life, which tended toward scandal. Hutch fathered seven more children with six different mothers, all of them white. And that's not counting the lovers who elected to have abortions.

Few entertainers could blow through money at the pace set by Hutch: houses, cars, sartorial finery and a decided bent toward betting on the horses. Accustomed to being pampered and gifted by legions of high-born women, his finances took a nosedive after his fall from society. After the changes in musical style and tastes that took place after WW II, Hutch eventually had to live on receipts from occasional jobs in small venues, and he often had to borrow money to pay his bills. He let himself go physically and drank too much, thus his trademark slim physique and good looks were forever lost. During the 1950s he had a comeback of sorts in India, where his homosexual inclinations once more rose to the forefront. By 1967, two years before his death, he had to sell his beloved Hampstead house (below) to settle bank debts. 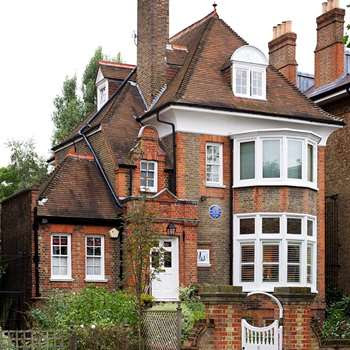 When Hutch died from pneumonia in 1969, he was almost an unknown. Only 42 mourners attended his funeral service, and, ironically, it was Lord Mountbatten who paid for the burial costs.

High Society’s Favorite Gigolo, a one-hour documentary on the life of Leslie Hutchinson, was broadcast on British television in 2008. Hutch, a biography by Charlotte Breese (1999), was adapted as a musical play by Joe Evans (London, 2013; music by Cole Porter). A National Scandal (London, 2018) by Eddie Lewisohn was a play about the relationship between Hutch and Edwina Mountbatten.

His incomparable rendition of The Way You Look Tonight (music by Jerome Kern with lyrics by Dorothy Fields):


Cole Porter wrote I'm a Gigolo for -- and about -- Hutch Hutchinson, who delivered the first-ever performance of the song in 1929:

Hutch -- A Biography of Leslie Hutchinson by Charlotte Breese