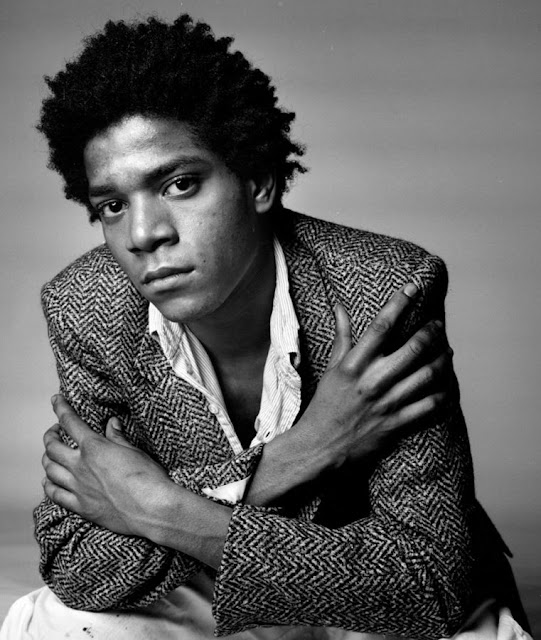 New York City graffiti prodigy Jean-Michel Basquiat (1960-1988) had honed his signature painting style of obsessive scribbling, elusive symbols and diagrams alongside mask-and-skull imagery by the time he was 20. He sold his first painting in 1981. Although he received extraordinary exposure and acclaim as a painter, the Brooklyn-born artist was also an accomplished poet and musician. But his meteoric rise as a multi-genre artist was cut short when he died from a heroin overdose at age 27*.

In the early 1980s he fell under the spell of Andy Warhol, with whom he collaborated on a series of paintings. Some say he entered into an intimate relationship with Warhol, his idol and mentor,  but Basquiat’s sexual relationship with fellow East Village artist David Bowes is better documented. However, no matter how fluid his sexual orientation has been described by art historians, most of his sexual relations were with women.

Although Basquiat’s Caribbean heritage provided ample subject matter (his father was Haitian and his mother of Puerto Rican descent), his art incorporated influences from African-American, Aztec and African cultures. Contemporary heroes such as musicians and athletes factored into his paintings, as well. Basquiat was often associated with Neo-Expressionism, and his works were shown at NYC’s most prestigious galleries and events. Tragically, a rapid descent into drug culture eventually stunted his creativity and artistic output. 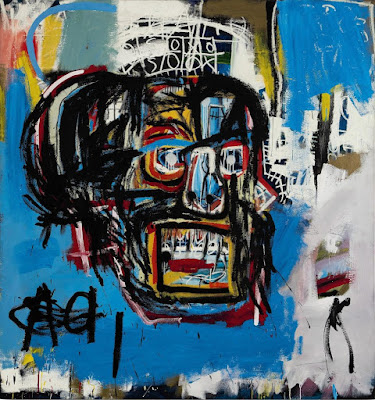 At a Sotheby’s art auction two months ago (May 18, 2017) Basquiat's “Untitled 1982" painting depicting a face in the shape of a skull, created with oil stick and spray paint, set a new record high for any U.S. artist at auction, selling for $110,500,000. Not a typo. The pre-sale estimate had been $60 million, aligned with the previous Basquiat record that had been set last year at $57.3 million, also for a skull painting. Japanese billionaire Yusaku Maesawa now owns both.

A 2009 documentary film, “Jean-Michel Basquiat: The Radiant Child” was shown at the 2010 Sundance Film Festival and on PBS television in 2011.

*Basquiat is buried at Brooklyn’s historic Green-Wood Cemetery, alongside other gay and bisexual luminaries Leonard Bernstein, Dr. Richard Isay, Jean Moreau Gottschalk, Fred Ebb (of the Kander & Ebb song-writing team) and Paul Jabara. See their individual posts in the sidebar.
Posted by Terry at 9:27 AM 1 comment: 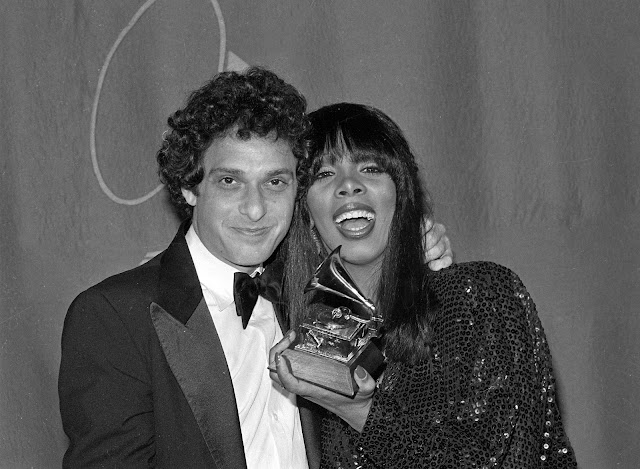 You might not know the name, but you know the music. Songwriter, producer, singer and actor Paul Jabara (1948-1992), of Lebanese ancestry, won an Academy Award in 1979 for writing the Donna Summer disco hit "Last Dance" (Oscar for best original song for 1978's “Thank God It’s Friday”). A native of Brooklyn, NY, he made his Broadway debut in the original cast of “Hair,” going on to create the role of King Herod in the original London production of “Jesus Christ Superstar.”

Although he wrote songs for Barbra Streisand (“The Main Event”), Bette Midler (“Jinxed”) and a duet for Streisand and Summer (“Enough Is Enough”), he is perhaps better known as the author of “It’s Raining Men” (The Weather Girls). Jabara also produced Streisand’s Grammy Award-winning “Broadway Album.” As a singer himself, he released seven albums. “Paul Jabara and Friends” (1983) featured a 19-year-old Whitney Houston.

Paul’s movie career included roles in "Midnight Cowboy," "The Lords of Flatbush," "The Day of the Locust," "Honky-Tonk Freeway," "Star 80," "Legal Eagles" and "Light Sleeper." He also appeared on television in "Starsky and Hutch," "Mary Hartman, Mary Hartman," "The Equalizer" and the made-for-television movies "The Last Angry Man" and "Out of the Darkness."

Jabara died from AIDS at just 44 years old. He is buried at the historic Green-Wood Cemetery in Brooklyn, alongside such gay luminaries as Leonard Bernstein, Fred Ebb (of Kander & Ebb), Louis Moreau Gottschalk and Dr. Richard Isay (see individual posts in sidebar).


Sources:
Wikipedia
New York Times obituary (1992)
Posted by Terry at 8:17 AM No comments: 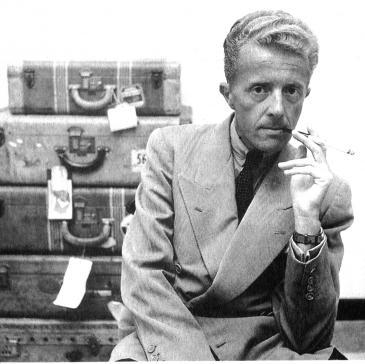 Bisexual American expatriate Paul Bowles (1910-1999) was a polymath who enjoyed successful careers as a composer, translator, novelist and poet. Until he was 35 years old he showed more interest in poetry and musical composition, although his legacy rests on his novels.

In 1937 Bowles met Jane Auer (1917-1973), a lesbian writer from a wealthy Long Island family. She walked with a permanent limp, the result of a riding accident when she was 14 years old. Both were only children who had grown up on Long Island, had lived abroad and spoke fluent French. Although American by birth, they spoke French together for the rest of their lives. Both Bowles and Auer preferred same sex partners, so their friends were baffled when the two married in 1938, having known each other for just a year. As a condition to marriage, they both agreed to be sexually “free,” while knowing that their union would upset their respective families. Paul’s anti-Semitic father, whom he hated, called Jane a “crippled kike.”

Marriage allowed each to express their homosexuality, instead of hiding it. Eighteen months into their marriage, they ceased sexual relations, although they remained devoted to each other for the rest of their lives. They were polar opposites in temperament and habits. Paul was restrained, but Jane was beyond wild. After both inherited some money, they pooled their resources to live a vagabond life free from the necessity of salaried jobs. In 1947 they settled in the city of Tangier, Morocco, living in separate apartments. They became permanent expatriates, remaining in Tangier to live out their lives. 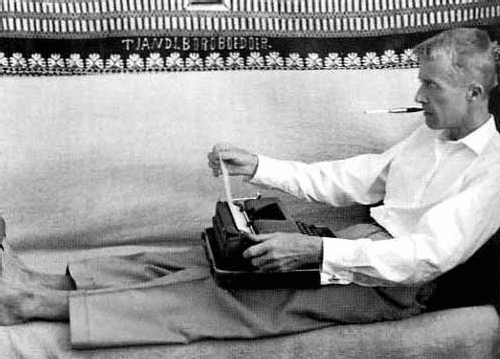 At that time Tangier’s status as an international zone (separate from the rest of Morocco) had been restored, lasting until Morocco’s independence in 1956. The city’s population comprised 31,000 Europeans, 15,000 Jews and 40,000 Muslims. The cost of living in Tangier was extraordinarily cheap, and both Paul and Jane were able to receive guests from the cream of the crop of influential intellectual homosexuals. Paul became a habitual abuser of hashish, Jane of alcohol. Unfortunately, both also entered into dangerous relationships with Arab lovers. Jane, with Cherifa, who dominated and eventually destroyed her life; Paul, with a 16-year-old boy named Ahmed Yacoubi and his successor Mohammed Mrabet, 30 years younger than Paul.

Any search engine can yield a list of Paul’s musical and literary works, but his best and most successful novel was The Sheltering Sky (1949), in which Paul and Jane appear as Port and Kit Moresby, a couple who journey to northern Africa to rekindle their marriage but fall prey to the dangers surrounding them, experiencing horror and tragedy. A distinguished film version was released in 1991, with Bowles himself as narrator, also appearing in a cameo role (at age 79). Unfortunately Jane, whose literary efforts were in direct competition with her husband’s, has not enjoyed an enduring literary legacy.

While continuing to live in Tangier, Jane descended into illness and insanity. Having given away all her money and possessions, she caused Paul to have to cover checks she wrote without funds to support them. She died in a  psychiatric clinic in Málaga, Spain, at age 56. Paul died in his modest home in Tangier in 1999, at the age of 88.

SALLY BOWLES – LIFE IS A CABARET

After writer Christopher Isherwood met Bowles in Berlin, Isherwood borrowed his surname in creating the literary character Sally Bowles, included in a collection of semi-autobiographical stories called Goodbye to Berlin (1939). Isherwood based the character on a woman he had known while living in Berlin. British playwright John Van Druten adapted Isherwood’s story for a 1951 Broadway play, I Am a Camera, for which Julie Harris won a Tony Award for portraying Sally Bowles. Producer Harold Prince commissioned the team of Kander (music) and Ebb (lyrics) to write the score for Cabaret, a musical version of I Am a Camera, which opened on Broadway in 1966, running for three years. It is a little-known fact that Judi Dench debuted the role of Sally Bowles in London’s 1968 West End production of Cabaret (photo evidence below). Judi Dench had never done a musical in her life, but John Kander later said that she was the best Sally Bowles he had ever seen, before or since. 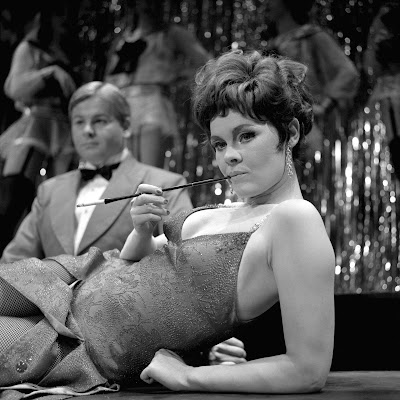