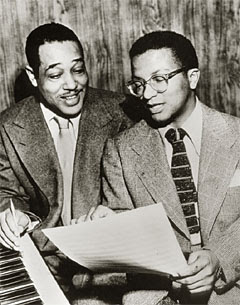 Out & Gay in the Jazz World

Billy Strayhorn (1915-1967) attended high school in Pittsburgh, while studying classical music on the side. His trio played daily on a local radio station, and he wrote a musical for his high school. He also wrote "Chelsea Bridge", "Take the A-Train", "Lotus Blossum" and “Lush Life,” all of which have become jazz classics. He started composing both words and music for "Lush Life" at age 16, which became a prophetic anthem for his life. He did indeed get to Paris, become a socialite and suffer from alcoholism. That such a world-weary lyric could come from the pen of a teenager is astounding.

At 23 his life changed completely when he met Duke Ellington, who was performing in Pittsburgh in 1938. Ellington was so impressed that he took him into his household, where he lived as part of the family. Ellington's nickname for Billy was "Sweet Pea." Strayhorn worked for Ellington for the next 29 years as an arranger, composer, pianist and collaborator until his early death from esophageal cancer, the result of a lifetime of cigarette use. As Ellington described him, “Billy Strayhorn was my right arm, my left arm, all the eyes in the back of my head, my brain waves in his head, and his in mine.”

Strayhorn was openly gay, but his association with Ellington helped protect him from discrimination. Until age 33 Strayhorn lived with his partner Aaron Bridgers, a jazz pianist and composer who moved to Paris in 1948. Until his death, Strayhorn then maintained a relationship with his subsequent partner, Bill Grove, who was Caucasian; however, they kept separate apartments, likely as the result of Strayhorn's higher profile and interracial prejudices of the day.

Strayhorn significantly influenced the career of Lena Horne, who recorded many of his songs. Strayhorn’s compositions are known for the bittersweet sentiment and classically infused harmonies that set him apart from Ellington.

Strayhorn to the rescue:

In a dispute over royalties in late 1940, ASCAP forbid its members from broadcasting any of their compositions over the radio. But Ellington, one of ASCAP’S most celebrated composers, needed radio broadcasts to promote record sales, which paid his orchestra’s salaries. Strayhorn rallied to save the day. During a hurried cross-country train ride to join Ellington in Los Angeles, Strayhorn (not an ASCAP member), got almost no sleep for six straight days, writing song after song after song. Strayhorn’s prolific, engaging new works kept the Ellington Orchestra afloat for months. When it was time for a new radio theme (Ellington’s own “Sepia Panorama” was still forbidden on the airwaves), Ellington chose Strayhorn’s “Take the A Train,” premiering it in early 1941. The rest is jazz history.

Queen Latifah (who lives in the Hollywood Hills with her partner Jeanette Jenkins) sings “Lush Life,” written when Strayhorn was a young, unseasoned song writer. Most performers say it’s difficult to sing and sounds like no other song in the standard repertoire.