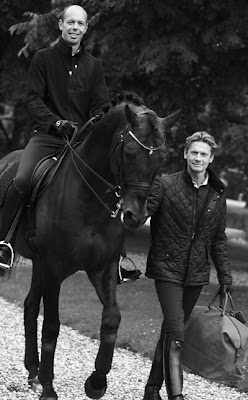 This is the first Olympics for 42-year-old openly gay equestrian Edward Gal (leading horse, at left), who will ride Undercover on the Dutch Olympic dressage team in London. His mount has competed as “Glock’s Undercover,” but commercial names are not allowed in the Olympics, so a simple “Undercover” must suffice. Gaston Glock, owner of the famed Austrian handgun company, is a brand new sponsor of the Dutch dressage trio of Edward Gal, Hans-Peter Minderhoud (seated, at left) and Nicole Werner.

But there’s a bit of soap opera going on here. You see, Edward Gal and fellow Dutchman Hans-Peter Minderhoud are long-term lovers, sharing a professional and personal life; they are partners, collaborating professionals and competitors in the show ring. Minderhoud and the mare Nadine became members of the Dutch Grand Prix team in 2007 and won historic team gold for Holland at the 2007 European Championships in Turin, Italy. As well, Minderhaud qualified for both team and individual dressage events at the 2008 Olympics in Beijing.

But I’m just warming up. Sponsor Gaston Glock, who just celebrated his 83rd birthday earlier this week, divorced his wife last year to marry 31-year old Kathrin Tschikof, CEO and manager of the Glock Horse Performance Center in Austria. Those of you quick with math will have already figured out that Gaston is more than 50 years older than Kathrin.

But that’s not the half. For those of you who are not readers of The Chronicle of the Horse or Euro Dressage, let me translate. Dressage (pronounced druh-SAHZH, French for “training”) is an ancient competitive equestrian sport in which a horse and rider perform a predetermined set of movements (in-place trots, halt, half pass, pirouettes, salute, etc.) in an arena – often to music – with minimal assistance from the rider. The dressage tests performed at the Olympics dressage competition are at the Grand Prix level (one of my regular blog readers has performed at the Prix St. Georges international level, so I asked him to proof this post). You may be familiar with the non-competitive dressage of the Lipizzaner stallions of the Spanish Riding School in Vienna, Austria. I have twice visited the original stud farm of these magnificent white stallions at the village of Lipica* (spelled "Lipizza" in Italian) in modern-day Slovenia, a few miles inland from the Adriatic. The storied history of this Habsburg supported enterprise a stone’s throw from the Italian border hits you as you enter the grounds and gaze in awe at the sign stating “Since 1580.”

*Lipizzaner: the name is derived from the Slovenian word lipa (linden tree), which is common in the area. The staff at the Lipica stud farm to this day plant a new linden tree for every foal born there. 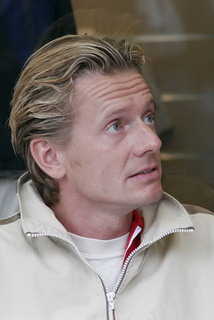 But I digress. The Germans have long dominated dressage and warmblood horse breeding. Nevertheless, Dutch rider Edward Gal (at left) and black stallion Moorlands Totilas (nicknamed “Toto”) accomplished an astonishing feat in 2010, winning triple gold at the FEI World Equestrian Games, the first ever to sweep the three available dressage gold medals at a single World Equestrian Games. Then a shocking sale of Totilas to a German owner took place later that year, breaking up the fabulous team of horse and rider, and the international dressage circuit was beside itself. The Germans had for years denigrated and loudly badmouthed the Dutch method of training, but were quick to snap up this Dutch trained miracle stallion, who was only in his second year in dressage despite being 10 years old; Toto’s success illustrated how capable Edward Gal was as a rider. Toto currently holds the world record for the highest dressage score in Grand Prix Freestyle Dressage, and earlier this year the Glocks tried to buy back Toto for Gal to ride in the upcoming Olympics, but the Germans wouldn’t sell. No surprise.

Turns out the Germans got their comeuppance. German dressage superstar Matthias Rath (pronounced RAHT), who had been training Toto for the 2012 Olympics, had to withdraw from the games earlier this month because of a glandular disorder. Let’s use the German term Schadenfreude to describe the likely reaction from Edward Gal.

I can’t finish this post without relating strange facts about the Dutch Dressage Team sponsor Gaston Glock. You see, Austrian-born Glock (below with young wife Kathrin) had never actually designed or manufactured a gun until he was 52 years old, but his Glock safe-action pistol has become known the world over. It has also made him enormously rich. When Glock was 70 (1999) Charles Ewert, one of Glock’s business associates, hired a 67-year-old French ex-mercenary to murder Glock with a mallet in a garage in Luxembourg in an attempt to cover up embezzlement of millions from the Glock company. I’m not making this up. Although Gaston received seven head wounds and lost a liter of blood, he survived the attack. Both hit man Jacques Pêcheur and Ewert were convicted and sentenced to long prison terms. 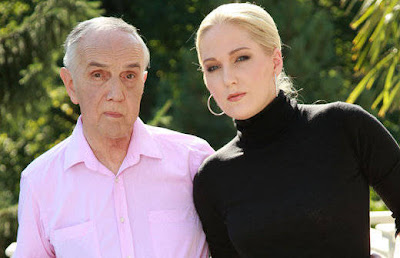 So, if you catch some of the upcoming Olympic dressage events next week (August 2-9) at historic Greenwich Park outside London, this bit of background might enhance your enjoyment. Let’s wish Edward Gal, who "plays for our team," the best success.
Posted by Terry at 12:30 AM