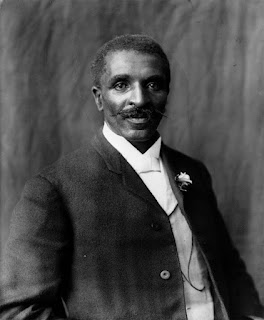 George Washington Carver (1860-1943) was a noted American botanist who introduced crop rotation to southern U.S. agriculture. He was particularly known for developing hundreds of uses for the peanut.

Born into slavery in Missouri, George (along with his mother and brother) was owned by a German immigrant named Moses Carver. When he was an infant, George and his mother were kidnapped in hopes that they could be sold for profit. Although George was returned to his rightful owner, his mother was lost. His frequent bouts with croup and whooping cough temporarily stunted his growth and permanently injured his vocal chords, leaving him with a high-pitched voice throughout his life. These respiratory illnesses prohibited his being able to work in the fields, so he spent his time in Moses Carver’s gardens. As a child he became so knowledgeable that he was known as "the plant doctor".

He changed his name from Carver's George to George Carver when he was freed from slavery. He continued to work on his former master's farm and taught himself to read and write before earning a high-school diploma in Kansas. Accepted by mail at a Presbyterian college in Highland, Kansas, he was refused admission when he arrived because of his race. Undaunted, he went on to earn bachelor's and master's degrees from Iowa State University, where he showed advanced skills in painting, sculpture, singing and science. He began college studies as a music major (he played the piano and organ), and he learned to paint so well that his paintings were selected for international exhibitions; he made his own paints. Carver was also adept at handwork – he sewed, knitted, and crocheted his own clothes while working his way through school, and he took up weaving baskets and rugs and doing woodwork. Around this time he started to use the name George Washington Carver, upon being asked to furnish a middle name. While at college in Iowa, Carver was the only black student, so he lived in an old office and ate in the basement.

In 1896 he went to Tuskegee University, an all-black trade school, to specialize in botany at the invitation of Booker T. Washington. Carver soon became director of agricultural research there. This is when his interest in peanuts came to the forefront. He once carved a miniature sculpture of the image of George Washington from a peanut and sold it for great profit. He took advantage of this opportunity and carved and sold thousands of miniature peanut sculptures each month. They became so popular in gift shops that he eventually became a millionaire.  When Carver arrived at Tuskegee, the peanut was not even recognized as a crop. Among the uses he invented for peanuts included various oils, gums, paints, food products and packaging materials. He repeated his success with the sweet potato, producing 118 products. He postulated that if all other foods were gone from the earth, the peanut and sweet potato alone could provide sufficient food, in both nutrition and in variety of preparation, to sustain humans indefinitely. 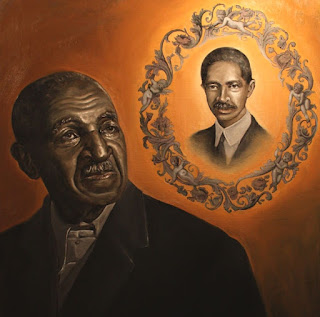 Carver never married or even dated women, and rumors circulated about his sexuality at Tuskegee Institute while he was on faculty there. In particular, his enjoyment of giving “therapeutic” peanut oil massages to and engaging in horseplay with handsome young men was seen as suspect. Some historians have claimed that there is no real "proof" that Carver was gay, but all agree that Carver  rebuffed all match-making efforts by his friends. From 1935 on he was the constant companion of young Austin Wingate Curtis Jr. (shown in inset at left), a Cornell graduate in chemistry. Austin accompanied Carver everywhere, providing comfort, assistance and protection, making it possible for Carver to continue his work. Carver and Curtis would walk arm-in-arm when the two set off to check on their experiments. The two men lived as partners from 1934 until Carver’s death, and the fact that Carver left all of his assets to Curtis validates the nature of their relationship.

Three years before his death in 1943 Carver founded the Carver Research Foundation at Tuskegee, using his own funds to establish the facility. Carver Hall at Iowa State University and the Carver Science Building at Simpson College are named after him. Carver appeared on U.S. commemorative stamps in 1947 and 1998 and was depicted on a half-dollar in 1951.


February is Black History Month.
Gay African-American men I have already featured are listed here:
(click on names in sidebar)