I was drawn to a window display at a used book store in Hillcrest (San Diego), which was featuring a pristine copy of Famous Faces (1973), a six pound coffee table book containing 1500 photographs taken by L. Arnold Weissberger. I had never heard of him. I bought the book and upon my return to Washington DC fired up the computer to learn something about the author. Turns out that Weissberger, who was not formally trained as a photographer, never used a flash when taking pictures of his friends, all of whom were celebrities in the entertainment field. The book of photographs is a “who's who” of celebrities, and there are comments by Sir Noel Coward, Igor Stravinsky, Sir John Gielgud, Douglas Fairbanks, Jr., Rebecca West, Anita Loos, Orson Welles and many more. I discovered that entertainment lawyer Arnold Weissberger (1907-1991) and his life partner, theatrical talent agent Milton Goldman (1915-1989), were popular hosts known for throwing parties for A-list stars. Arnold was more than likely their lawyer, and Milton their source of jobs. 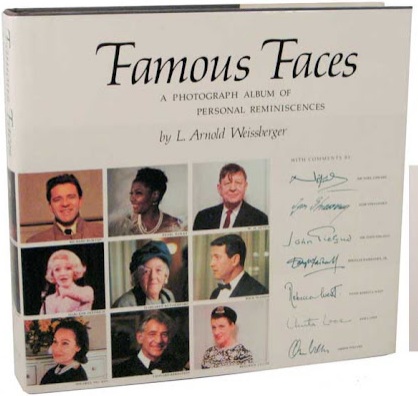 Milton Goldman was vice president of International Creative Management (I.C.M.), and head of its theater department. His clients included such luminaries as Helen Hayes, John Gielgud, Laurence Olivier, Arlene Dahl, Maureen Stapleton, Mary Martin, Christopher Plummer, Lillian Gish, Hildegarde, Vanessa Redgrave, Albert Finney, Ruth Gordon and Peggy Ashcroft. Goldman was also president of Martha Graham's Center for Contemporary Dance and served on the boards of other nonprofits. He served as father confessor, rabbi, psychiatrist, and best friend to many of the top stars he represented. Attending the theatre up to five times a week, he was always on the lookout for new clients. His weekends were devoted to reading and casting new plays.

Arnold, an avid art collector, was almost never seen without a white carnation (to match his white moustache) in the buttonhole of his suit’s lapel, and he was seldom seen with his jacket off. He spoke with an upper-class Boston accent, acquired by spending seven years at Harvard. Arnold and Milton entertained at their apartment on East 55th Street, between First Avenue and Sutton Place, before moving to 45 Sutton Place South. It was at the latter address that their entertaining took on a two-tier style, when they began holding separate A-list and B-list parties. They also entertained at their ocean-front weekend home in Seacliff, Long Island, but they had almost daily business lunches at the Four Seasons restaurant when in residence in Manhattan.

Details of a particular Weissberger-Goldman party from the 1970s:

Andy Warhol picked up Bob Colacello and took a cab to 45 Sutton Place South to attend a book party for Anita Loos given by Arnold Weissberger.  Warhol had forgotten his tape and camera, and there were lots of celebrities. Said Warhol, “Arnold Weissberger and Milton Goldman have the longest-running gay marriage in New York. Arnold is seventy-something, the biggest old-time show-biz lawyer and an amateur photographer. He takes pictures of everyone who comes to his house. He had a book out last year called Famous Faces, placed on the dining table at the party, and he was making the famous faces sign it next to their pictures.  Milton Goldman is sixty-something and a big agent at IFA.  Bob noticed that he was the only person under thirty there – barely – and I said that Arnold must be afraid to have young kids around because he might lose Milton.  All the butlers and bartenders were over sixty; they brought one drink at a time, and the tray shook.”

During the summers Arnold and Milton sailed to England on the Queen Elizabeth II and always took the same suite at London’s Savoy Hotel, usually for a month. The living room, which directly overlooked the Thames, was equipped with a grand piano. Thus their penchant for hosting stellar parties continued unabated.

When Arnold Weissberger died in 1981 at age 74, three days after returning from a vacation in Acapulco with Milton, Goldman was not mentioned in his New York Times obituary. However, when Goldman died eight years later, the NYT obituary stated that, as a young man, “he worked 10 years in the family’s gas station and then met the theatrical lawyer Arnold Weissberger, and began a friendship that lasted 30 years, until Weissberger’s death.” Milton had told this story to all of his close friends: when Arnold had pulled into his father’s gas station decades before, Milton pumped the gas – and they had lived happily ever after.

Today the Williamstown Theatre Festival administers an annual L. Arnold Weissberger Award that recognizes excellence in playwriting. The recipient receives a $10,000 grant, and the winning script receives a reading produced by the Williamstown Theatre Festival, of Williams College in the Berkshires (western Massachusetts), as well as publication by Samuel French, Inc.
Posted by Terry at 12:30 AM