The English Patient (was a pack of lies...)

The prize-winning novel The English Patient (1992) and the much honored movie version (1996, with nine Oscar wins) deliver one of the most beloved romances of the past few decades. The book and film were both based on the activities of Count László Almásy (1895-1951), a real-life Hungarian spy. Too bad so few of the facts contained in the novel/film were true.

Where to begin? First of all novelist Michael Ondaatj made up Count Almásy’s affair with Englishwoman Katherine Clifton, portrayed by Kristin Scott Thomas in the film. Count Almásy (actor Ralph Fiennes), was exclusively homosexual, and among his many male lovers were several Egyptian princes. His most significant relationship, however, was with German military officer Hans Entholt, to whom he wrote passionate love letters. László even intervened to try to keep Entholt from being sent to the Russian front. In fact, there is no evidence that Almásy ever slept with a woman. 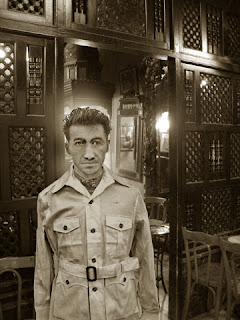 Central to the story were the severe burns to Almásy’s body and his resulting addiction to morphine, and in the book, Almásy dies from an overdose. In reality Almásy was never shot down, burned or captured in the desert, and he died in 1951 from dysentery at the age of 54, while visiting Salzburg, Austria. Not to mention that Almásy was not movie-star handsome like Fiennes. In fact his nose was so large and out of proportion to his other facial features that in profile it looked like a beak.

In truth, his life needed no embellishment or revision. It was filled to overflowing with daring intrigue, peppered with escapades involving some of the world’s most powerful and influential men.

László Almásy was born in 1895 in a Hungarian castle in what is now Bernstein* in eastern Austria. He showed an early aptitude for flying, and by the age of 20 was a pilot in the Austro-Hungarian air force. Disappointed at the disappearance of the empire, László drove Karl, the grand-nephew of Emperor Franz Josef, into Budapest in 1921 in an attempt to restore the monarchy, even though the empire was beyond redemption. It seems that Karl gave Almásy the title of count, which László used only abroad, because it was not an authentic hereditary title. 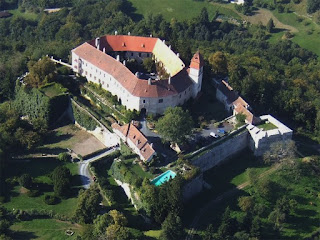 *Burg Bernstein (Amber Castle in English) is today a hotel that provides an escape from modern life. There is no traffic noise and no telephones or televisions in the rooms to disturb the serene atmosphere of tranquility and contemplation. Each evening guests dine by candlelight in the Knights' Hall, enjoying the culinary skills of the lady of the castle. There is electricity only in the guest suites, which are heated by fires fed from the hallway. Staying here is like being invited to visit your noble relatives, who live with magnificent antiques, enormous carved fireplaces and brocade walls. Rooms are priced from 180 Euros.

László was an intrepid explorer, and in 1933 Almásy discovered the Cave of Swimmers in Gilf Kebir in remote southwest Egypt along the border with Libya. The caves contain rock paintings created 10,000 years ago during the time of the most recent Ice Age. At the time Almásy was passing his hand-drawn maps to grateful officers of Mussolini's army in Libya. By 1940 he was involved with German military intelligence. By the summer of 1942, he aided Rommel's Afrika Korps by motoring 2,000 miles across the great desert from Libya, entirely through enemy territory using his own sketch maps. When he reached the Nile he dropped off two agents who were then able to set up German intelligence headquarters on a houseboat. Almásy then headed back along the same route. After achieving this stupendous feat, Rommel personally promoted him to the rank of major.

Almásy survived the desert campaigns and continued to work for the German Abwehr in Turkey, until he sensed he was on the losing side of a world war. Soon thereafter he began to feed his secrets to the British. Even so, when the war ended, he was sent by the Allies to Hungary and imprisoned in a Russian camp from which he escaped with the help of friends in the Egyptian royal family. 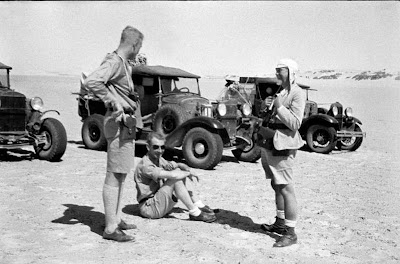 When Almásy (seated in photo above) died in 1951, his tombstone in the local cemetery in Salzburg was inscribed in Arabic, "The Father of the Sands", a moniker coined before the war by an old camel-rustler. Almásy was given a less grandiose epitaph by a British member of the Zerzura Club: "A Nazi, but a sportsman."