Lem was a closeted gay man who was in love with his best friend, Jack. They had been friends since they were teenagers, sharing a similar sense of humor and fun and a mutual hatred of their strict, stuffy school (Choate). Jack had been a ladies’ man from his teenage years. When Lem sent a letter to Jack that contained a sexual overture, his best friend’s response was, “Sorry. I’m not that kind of boy.” Well, that’s nothing extraordinary; many gay men have hopeless crushes on their straight male friends. 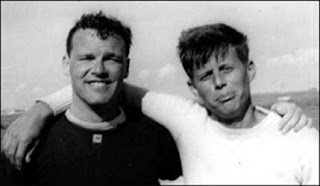 Except Jack grew up to be John F. Kennedy, president of the United States. Lem was his lifelong friend and confidant (full name Kirk LeMoyne Billings, 1916-1981). But Jack didn’t abandon his friend when he learned he was homosexual. He rejected the sexual overture, but not the friendship. He invited Lem on family vacations, later sought his counsel on matters of state, and gave him his own room in the White House, where he was in residence most weekends. Their friendship endured uninterrupted for 30 years, and Lem was Jack’s closest friend during all that time, outside of family. Ted Kennedy said, "I was three years old before it dawned on me that Lem wasn't one of my older brothers. So often did he come home with Jack that Lem kept more clothes in the closet than Jack did,” Ted added.

Jack and Lem met as teenagers in 1933, when homosexuality was a dangerous secret. Laws of the times made homosexual activity a criminal offense. They were roommates at Choate and took a two-month trip to Europe together. But Jack did not turn his back on his gay friend, even after moving into the political arena. It was a friendship that turned into a life connection without crossing sexual boundaries. When he became president, Jack showed even deeper loyalty to Lem by offering him a position in his administration. Instead, Lem, an advertising executive in New York City, decided to take the unofficial role of First Friend. His intense friendship with Kennedy is chronicled in the 2007 biography, “Jack and Lem: The Untold Story of an Extraordinary Friendship,” by David Pitts (available in paperback and Kindle editions).

Kennedy offered to put Lem in charge of the newly-created Peace Corps, but he declined (the post went to Jack’s brother-in-law, Sargent Shriver.) In instances where Jackie Kennedy was unavailable to go to a dinner or on a foreign trip, Jack took Lem along. Lem remained close to the Kennedys after Jack’s and Bobby’s assassinations, but he reacted to their deaths by lapsing into despondency and use of alcohol. JFK had displayed a whale scrimshaw on his desk in the Oval Office; it had been a gift from Lem, and the item was buried with Jack. 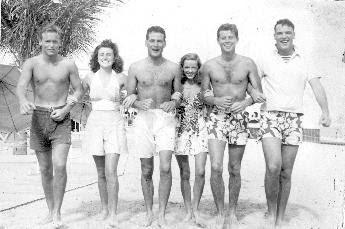 When Kennedy married Jackie in 1953, he had already known Lem for 20 years. When the British invited Jackie to England for the unveiling of a memorial for JFK at Runnymede, she asked Lem to go with her. She frequently visited him in Manhattan when she lived there in the 60s, and she also went to his funeral.

Lem died of a heart attack at age 65 (1981), and is buried in Allegheny Cemetery in his hometown of Pittsburgh, Pennsylvania. It was a cohort of young Kennedy men who carried Lem’s coffin to its final resting place.

In the photo below, Lem and JFK pose with a dog they purchased for $5 in 1937, while traveling through Europe. Unfortunately, Jack's resulting respiratory problems revealed that he was allergic to it. 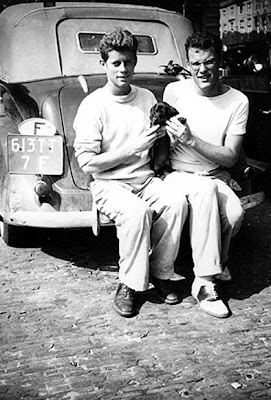