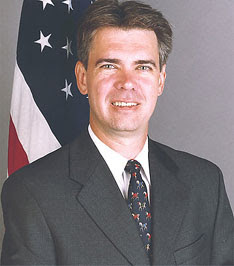 One week after the attacks on the World Trade Center and the Pentagon, Secretary of State Colin Powell presided over the swearing in of Michael Guest, an openly gay longtime state department employee, as U.S. ambassador to Romania. During the ceremony Powell took the time to respectfully acknowledge Guest's partner of six years, Alex Nevarez. The Human Rights Campaign called Powell’s acknowledgment of Nevarez a “small gesture that spoke volumes.”

Michael Guest was the first publicly gay man to be confirmed by the U.S. Senate to serve as a U.S. Ambassador. But serving as an openly-gay ambassador under the Bush administration did not prove to be as pleasant as his swearing-in. Guest retired in 2007, and at his retirement ceremony, “he did what few people do — displayed uncommon courage and threw a rhetorical hand-grenade into his own party,” the New York Times reported. “Guest took Secretary of State Condoleezza Rice (who was not present) to task for failing to treat the partners of gay and lesbian foreign service officers the same as the spouses of heterosexual officers.” Guest said that was the reason for his departure from diplomatic service.

Quotes from his retirement speech:

“Most departing ambassadors use these events to talk about their successes . . . But I want to talk about my signal failure, the failure that in fact is causing me to leave the career that I love,” said Mr. Guest, 54, whose most recent assignment was dean of the leadership and management school at the Foreign Service Institute, the government’s school for diplomats.

“For the past three years, I’ve urged the Secretary and her senior management team to redress policies that discriminate against gay and lesbian employees. Absolutely nothing has resulted from this. And so I’ve felt compelled to choose between obligations to my partner — who is my family — and service to my country. That anyone should have to make that choice is a stain on the Secretary’s leadership and a shame for this institution and our country,” he said.

“Unlike heterosexual spouses, gay partners are not entitled to State Department-provided security training, free medical care at overseas posts, guaranteed evacuation in case of a medical emergency, transportation to overseas posts, or special living allowances when foreign service officers are assigned to places like Iraq, where diplomatic families are not permitted.”

“This is not about gay rights. … It’s about equal treatment of all employees, all of whom have the same service requirements, the same contractual requirements,” said Guest. 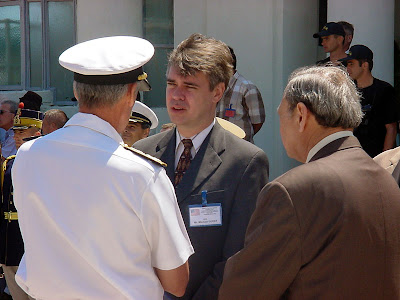 While the Bush administration had previously indicated an unwillingness to outlaw employment discrimination, Guest courageously highlighted the fact that the administration was also practicing it.

Historical note:
When Bill Clinton tried to appoint openly gay Jim Hormel ambassador to Luxembourg in 1997, the Senate blocked him for 21 months. Clinton finally appointed Hormel in 1999 without Senate confirmation while the Senate was in recess.

• Former ambassador Guest today serves as senior advisor to the Council for Global Equality. In April of this year a Congressional briefing, moderated by Amb. Michael Guest (ret.), was hosted by the LGBT Equality Caucus to mark the release of the US State Department’s annual Human Rights report. The briefing highlighted trends in the LGBT human rights records of the 194 countries reviewed in this year’s report. Members of the international human rights advocacy community and congressional staff attended the briefing.

• Last month (June 17, 2011), for the first time, the United Nations Human Rights Council adopted a resolution expressing concern at acts of violence and discrimination committed against lesbian, gay, bisexual and transgender people. The vote was 23 countries in support, 19 against and 3 abstentions. The United States voted for the resolution. This is the first official UN resolution to focus exclusively on human rights, sexual orientation and gender identity, and it is the first time that gender identity has ever been included in such a formal UN text. The resolution calls for a study to identify and make recommendations on how to put an end to such fundamental human rights abuses. The study’s release date is set for next year. U.S. Secretary of State Hillary Clinton said, “Gay rights are human rights. So are the rights of religious minorities, the disabled and so many others who have been historically ignored or persecuted, not for what they do, but for what they are. This is an important step in the quest for dignity for all. And I am proud that the U.S. is a part of it.”
Posted by Terry at 12:41 AM