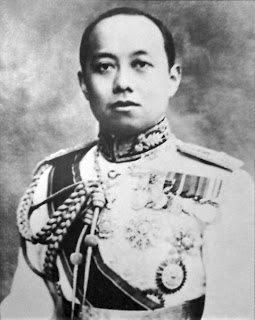 According to Thongchai Winichakul (Assistant Professor of History, University of Wisconsin), the homosexuality of King Vajiravudh, Rama VI (1881-1925) of Siam* is one of the worst kept secrets among Thai historians. King Vajiravudh ruled Siam from 1910-1925, and although there were a few passing references to his sexual orientation in both English and Thai sources, it was generally not spoken about. Thongchai Winichakul states that the king’s homosexuality must have been common knowledge to his court at the time. There were four attempts to marry him to princesses, and all failed. Eventually he married three times, each a brief union during which the status of his wives was swiftly elevated only to be promptly demoted.

*The country's official name was Siam until June 23. 1939, when it was changed to Thailand. It was then renamed Siam from 1945 to 1949, after which it reverted back to Thailand.

Following the death of his elder half-brother, Crown Prince Maha Vajirunhis, at the age of sixteen in 1895, Vajiravudh was appointed Crown Prince. He had been educated at Oxford in England, and his great love of literature and poetry in both Thai and English, alongside his scholastic abilities, was later to manifest itself during his reign.

King Vajiravudh's coronation in Bangkok on December 2, 1911 was an occasion of much splendor. Among those present at the ceremonies were members of the royal families of Great Britain, Denmark, Sweden, Russia and Japan – the largest gathering of European royalty on the Asian continent before or since. The Russian imperial jeweler, Carl Fabergé, even set up a temporary shop within the Oriental Hotel to coincide with the festivities.

Through most of his reign there was a good deal of open criticism of the king. Some charged that the real power of the state lay with the young men of the king's inner entourage, for whom Vajiravudh had written plays and with whom he played games. This male circle formed the nucleus of the king’s social life, and Vajiravudh organized all-male clubs and societies with their numbers. 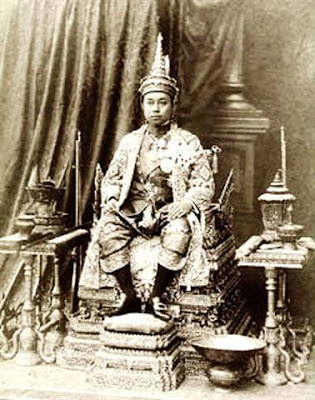 Early in his reign a coup was plotted against him. Their leaders accused the King of devoting all his time to writing plays and acting in them with his male companions. They also accused him of living a luxurious western lifestyle, building palaces and gardens and owning expensive horses from Australia, while preaching to his subjects to be austere and nationalistic. News of the plot was leaked, and the conspirators were arrested and sentenced to death or long prison terms. The king, however, released them all, stating that their motivations had been for the sake of the kingdom.

King Vajiravudh took steps to align Siam with the modern international world, and his reign was characterized by Siam's movement further towards democracy. He established a university, built Siam’s first airport and expanded public transportation systems. Among the king’s lasting achievements were devising a system of transliteration of Thai into English and of translating the entire works of Shakespeare into Thai. His passion for traditional Thai theater and ballet has left a massive collection of published scores which form the basis of the study of these arts to the present day.

In 1916, just five years after his coronation, King Vajiravudh declared war on Germany, and Siamese troops fought with the Allies during the latter part of World War I. The king died nine years later in Bangkok at the age of 44, without a direct male heir; therefore his brother Prajadhipok became the new monarch.