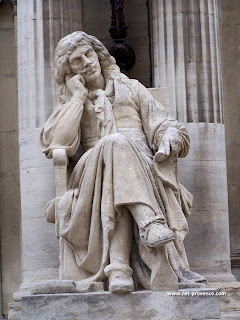 Jean-Baptiste Poquelin (1622-1673), considered the greatest French playwright of all time and one of the greatest masters of comedy in Western literature, was better known by his stage name, Molière (mohl-YAIR). He was also the leading French comic actor, stage director and dramatic theoretician of the 17th century. He abandoned a successful career as a lawyer to form an acting troupe that eventually played before King Louis XIV, whose brother became Molière’s patron. Thirteen years of work as an actor led to a career as an influential playwright, and the king granted a royal pension to his troupe, along with the title “Troupe du Roi” (the king’s troupe). Molière thus became the official author of entertainments for the royal court of France.

In 1662, at age forty, he married Armande Béjart, a 19-year-old actress whom historians say was either the sister of his mistress Madeleine, or (as some of the playwright's rivals claimed) her daughter by Molière. They had one child, Esprit-Madeleine, born in 1665. The tempestuous marriage led to more than one separation and reconciliation between the playwright and his wife, who was 21 years his junior. To her utter humiliation, while in his late 40s Molière fell in love with a 15-year-old actor named Michel Baron (1653-1729). When Molière’s wife learned of it, she demanded that the playwright make a choice between her and the boy. When she heard Molière’s decision, she started packing her bags. Molière and his young male lover were together until the playwright’s death.

In the late 1660s, Molière developed a lung ailment from which he never recovered, although he continued to write, act, direct, and manage his troupe as energetically as before. He finally collapsed on February 17, 1673, after the fourth performance of his new play, The Imaginary Invalid (oh, the irony!) and died at home that evening. Four days later, on the night of February 21, he was secretly interred in Saint Joseph's Cemetery, but church leaders refused to officiate or grant his body a formal burial, since at the time actors were not allowed to be buried on sacred ground. Later, his body was re-interred, and today Molière’s tomb is in the huge, prestigious Père-Lachaise cemetery in eastern Paris, near the tombs of Marcel Proust and Oscar Wilde.

Today Molière’s plays continue to be presented at the Comédie-Française in Paris, chiefly in the Salle Richelieu. Inside the Café de la Comédie Française, the wall mirrors have wonderful depictions of scenes from Moliere’s comedies. 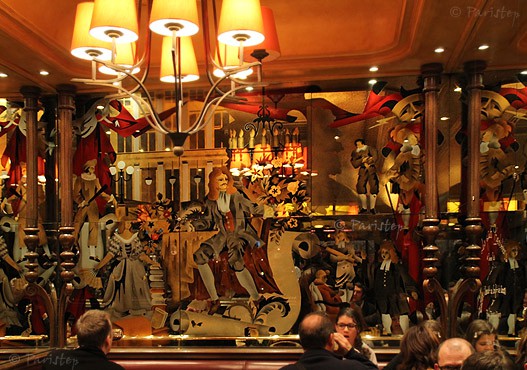 Writing is like prostitution. First you do it for love, then for a few close friends, and then for money.

I prefer a pleasant vice to an annoying virtue.

One ought to look a good deal at oneself before condemning others.

As the purpose of comedy is to correct the vices of men, I see no reason why anyone should be exempt.

We die only once, and for such a long time.

Of all the noises known to man, opera is the most expensive.

All the ills of mankind, all the tragic misfortunes that fill the history books, all the political blunders, all the failures of the great leaders – have arisen merely from a lack of skill at dancing.
Posted by Terry at 1:30 AM