You have likely never heard of Frank McCarthy or Rupert Allan. Both were WW II military leaders who became movers and shakers among the top echelons of Hollywood’s elite. They even included presidents and European royalty among their personal friends. Publicist Rupert Allan (1913-1991) had many star clients, chief among them Bette Davis, Rock Hudson, Marilyn Monroe, Steve McQueen, Gregory Peck, Deborah Kerr and Marlene Dietrich. A Rhodes scholar and a lieutenant commander for intelligence in the U.S. Navy during WW II, Mr. Allan went on to establish a career in journalism, working for the St. Louis Dispatch and Look magazine. In 1955 he forged a new career as a publicity agent, rising to the top of that profession. He was a popular and respected publicist, and invitations to his Beverly Hills home were highly coveted.

As West Coast editor for Look magazine, one of Rupert’s first interviews was with Marilyn Monroe, who asked him to represent her.

Below: Rupert and Grace Kelly at sea. 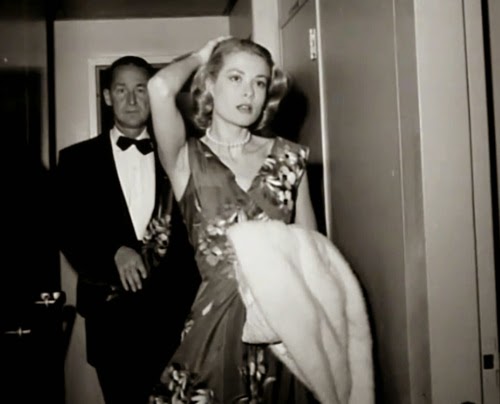 Also among his clients was Grace Kelly, and when she left Hollywood to marry Prince Ranier of Monaco in 1956, Rupert was a press representative to the high profile wedding. Notably, he defused a potentially explosive situation when 1,600 journalists showed up in Monaco to cover the event, when only 40 had been expected. So thankful was Princess Grace for his skill in controlling an unanticipated difficulty that she appointed him Monaco’s consul general in Los Angeles. Later, in 1989, Prince Rainier made Allan a Chevalier of the Order of Grimaldi in honor of his service.

Mr. Allan had a house on Sea Bright Place in Beverly Hills, and his life partner, film producer Frank McCarthy (1912-1986), resided in a somewhat grander, larger house right next door. Through his association with Rupert, Frank got to know Grace Kelly well, and when Princess Grace visited Los Angeles, she and her children would invariably stay in Frank’s home. She loved the two men like brothers, and to her credit, Princess Grace always admonished anyone who made disparaging remarks about homosexuals. By today’s standards it seems an unnecessary caution that two men had to maintain separate homes to keep the nature of their relationship from the press, but such were the times.

McCarthy was a retired brigadier general who had served as an aide to General George C. Marshall during WW II. At age 33 he was the youngest man ever appointed Assistant Secretary of State (1945), and he became personal friends with Presidents Truman and Eisenhower. Frank had a diverse career as a journalist, press agent and war hero, but he eventually became a film producer. 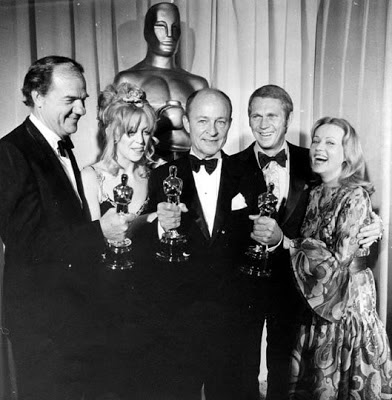 Note: Patton's Oscar statuette is on display at the Virginia Military Institute (VMI) museum in Lexington, Va., where generations of Pattons received a military academy education. VMI is known as the West Point of the South, and interestingly enough, Frank McCarthy himself had attended VMI, graduating in 1933. An honors graduate, Frank later taught English at the institute before becoming a newspaper reporter.


McCarthy had left VMI with the goal of breaking into show business, and he was able to secure work as a press agent, but with the outbreak of war in 1941, he reenlisted, becoming an aide to Gen. Marshall and attaining the rank of major by the age of thirty. His honors from World War II included the Distinguished Service Medal and Legion of Merit, and Officer of the Most Excellent Order of the British Empire. In 1976, McCarthy donated his war-time papers to the George C. Marshall Research Foundation, which is located on the VMI campus. Frank served on the foundation’s Board of Trustees. The 33 boxes of documents covered the years 1941-1949 and include correspondence with the likes of Irving Berlin, Eleanor Roosevelt, Nelson Rockefeller, Frank Capra, President Eisenhower, Jose Ferrer, Dean Acheson, Darryl Zanuck, Henry Cabot Lodge and George Patton – an eclectic mix of military, political and entertainment royalty. It should be noted that the collection contains eight letters between Frank and his partner Rupert Allan.

McCarthy was being groomed for a cabinet position in the Truman administration when he abruptly withdrew his name from consideration due to an undefined "illness." At the time, it was not possible for even a completely closeted homosexual to serve in such a high-profile capacity, even though he had the protection of powerful friends – his ex-boss, Gen. George C. Marshall, had lobbied strenuously to end the prosecution of gay servicemen. McCarthy's “retirement” was in fact a sad act of political self-sacrifice. However, he returned to Hollywood and worked as the head of public relations for 20th-Century Fox, acting as an in-house censor to trouble-shoot problematic material during production.

It was about this time that Frank and Rupert’s relationship was cemented. It was relatively easy for the couple to “hide,” since both were completely masculine in appearance and demeanor – and utterly discreet. Even though they lived for decades as lovers and next-door neighbors, details of their personal relationship were known only to Hollywood insiders. When they attended the same party or business function, they invariably escorted female companions to counter any speculation about their personal relationship, and they always acted surprised to see each other. When Frank died of cancer in 1974, Rupert issued a press release in which he stated only that Frank was “unmarried” – an act of self-censorship. In 1991 Rupert died in his sleep at his home in Beverly Hills from age-related complications.
Posted by Terry at 2:18 AM