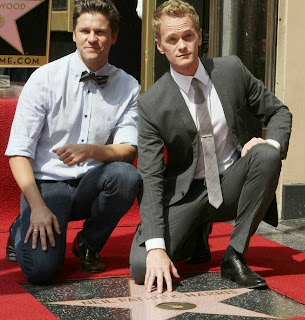 Neil Patrick Harris, who has worked steadily as an actor since 1988, was awarded a star on the Hollywood Walk of Fame on September 15, 2011. During the ceremony, Harris said, “Thank you everyone for coming out, really, especially David Burtka (at left in photo), my better half, who I love more than anything in the world, except for this star.”

Harris is openly gay, announcing it in 2006 by saying, "I am happy to dispel any rumors or misconceptions and am quite proud to say that I am a very content gay man living my life to the fullest..." Harris, age 38, is a prominent and popular actor, singer and magician (!). His career has skyrocketed since coming out.

With his partner David Burtka (photo below), with whom Harris was been in a relationship since 2004, the men are raising fraternal twins, born October 12, 2010, via a surrogate mother. Black and white photo of Harris from Rolling Stone magazine. 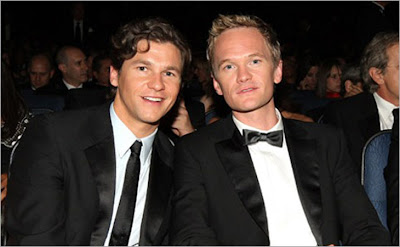 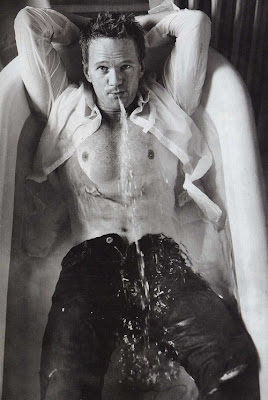 This spring Harris hosted the 2011 Tony Awards. I was dumbstruck by how clever this opening number was. If we need proof that we've come a long way as homosexuals, consider that a national TV audience witnessed an openly gay entertainer poking fun at the fact that gays dominate the world of theatre arts -- and he has the audience in his pocket. 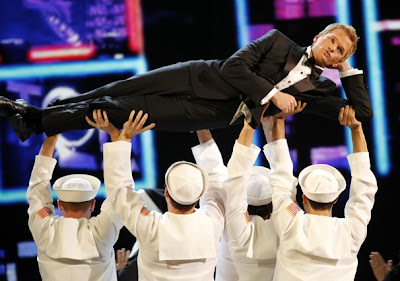 We, as gay men, should pay dues to this man for bringing long-overdue respectability to homosexuals. He is a child actor who did not grow up to have a career ruined by drugs; he has not been in and out of rehab; he and his long-time partner are raising children in a loving home setting. His career continues to skyrocket after coming out publicly. I can find not one instance of a disparaging word being uttered against him by anyone -- straight or gay. The icing on the cake was the fact that he had a birthday three days after hosting the awards (born June 15, 1973). 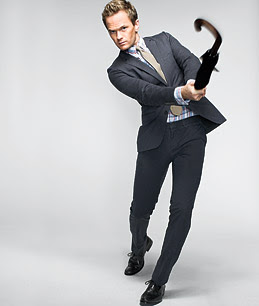