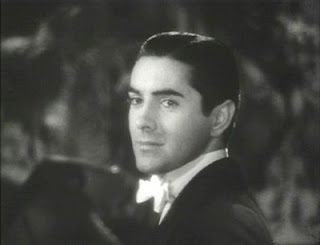 Ohio-born movie star Tyrone Power (1914–1958) was the son of an actor. A practicing bi-sexual, Tyrone was involved with several men during his career, among them composer Lorenz Hart (lyricist of the Rodgers & Hart song writing team) and fellow actor Cesar Romero, who provided details about Power's same sex activity in interviews after Tyrone's death. Strikingly handsome Power had affairs with many of the attractive men on the movie lots. He was often seen in public with well known homosexuals, but he was so loved by the Hollywood community, that they turned a blind eye.

Power was liked and admired by men and women alike. His group of gay friends included director George Cukor and actors Clifton Webb, Lon McCallister (and his lover William Eythe), Cary Grant, Reginald Gardner, Van Johnson and bi-sexual billionaire Howard Hughes. Books and articles written about Power relate that the great gay love of Power's life was a lowly technician at 20th Century Fox, with whom he had a sexual and romantic relationship that lasted for decades. 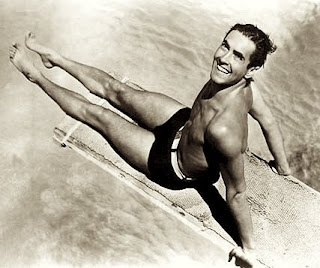 Like most bi-sexual and homosexual Hollywood stars, Power lived in fear of being “found out.” Although studio head Darryl Zanuck liked Tyrone, he was afraid of losing Fox’s resident matinée idol and biggest moneymaker, should the truth of his homosexual activity become public. On the set of Suez (1939), Tyrone played opposite a French starlet named Annabella, who was older, self-assured and possessed of a frankness and down to earth attitude. Power liked her, and much to Hollywood's and his mother's surprise, they married. It was difficult to satisfy Zanuck, however, who was now worried that Power’s female fan base would be adversely affected by news of the marriage. Nevertheless, Power continued to have dalliances with both men and women alike. For a while in the early forties, he carried on a passionate affair with the young Judy Garland, which some felt led to the first of her many breakdowns. 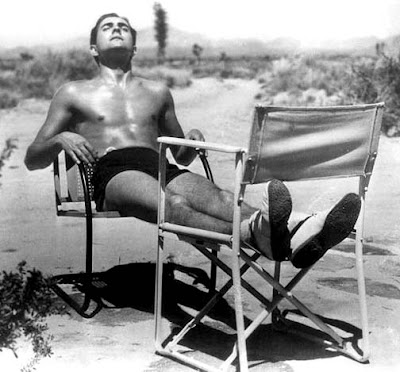 With the advent of World War II, Power enlisted in the Marines and fought in the South Pacific, after which he negotiated a new contract with Fox. By 1946 he and Annabella had grown apart, and their marriage was over. He took a six week trip to South America with his on-again off-again male companion, gay actor Cesar Romero. Upon his return, he entered into a tempestuous relationship with Lana Turner, who was then the queen of MGM and between husbands. They made a striking couple, but Tyrone could see that life with Lana would be tempestuous and, instead, married Latin starlet Linda Christian, with whom he fathered two daughters before the marriage ended in the mid-fifties.

Reports of same sex relations continued. British comedian and actor Bob Monkhouse related in his 1994 autobiography Crying with Laughter that he had rejected sexual advances from Power. The fashion critic Mr. Blackwell had romantic moments in Power’s dressing room, as detailed in his 1995 autobiography From Rags to Bitches. In his book, Errol Flynn: The Untold Story, author Charles Higham reports that Power had a sexual relationship with Errol Flynn. According to William J. Mann, in his book Behind the Screen: How Gays and Lesbians Shaped Hollywood, 1910-1969, Power was involved in numerous same sex relationships. In his book, The Evening Crowd at Kirmser's: A Gay Life in the 1940s, Ricardo J. Brown confirms that Tyrone Power and Tallulah Bankhead were among thespians and movie stars who were bisexual. In Oops, I Lost My Sense of Humor, Lois M. Santalo writes that "many stars of the silver screen, dating back to Tyrone Power," had been gay or bisexual. In Robert Aldrich and Garry Wotherspoon's (both of Sydney University) Who's Who in Contemporary Gay and Lesbian History: From World War II to the Present Day, Power is listed among the "Top box office stars who were gay or bisexual". Your blogger has recently expanded this list of references for all those comments left by those who say I have no evidence, that I'm just repeating rumor. Read this post carefully -- I'm not saying Power was gay; I'm saying he was bisexual, engaging in sexual relations with both men and women.

Although Tyrone was only in his early forties, he was beginning to look older than his years. The busy Hollywood social life, the smoking, drinking, all night parties and other excesses were beginning to take their toll. He ignored the signs that he might have a weak heart like his father and continued to live as he always had. While filming Solomon and Sheba (1958), he did his own stunts and worked outside in the grueling sun, often in heavy armor. One afternoon on the set in Spain, during a dueling scene with George Sanders involving heavy swords, Tyrone collapsed. He'd suffered a massive heart attack and died before anything could be done. He was 44 years old. 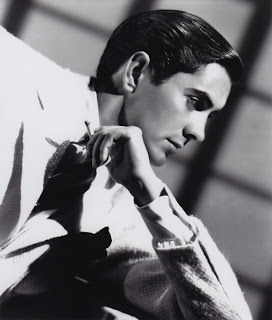 In a brief career of 25 years, Tyrone Power had made 50 films. After his death those in the know began to speak openly of his homosexual dalliances. The women with whom he’d had affairs were incredulous, insisting that the rumors could not possibly be true. They proposed that the charges of homosexual relations were the work of jealous rivals who wanted to damage Power’s reputation. Sure. Why would they want to damage the reputation of a dead actor? 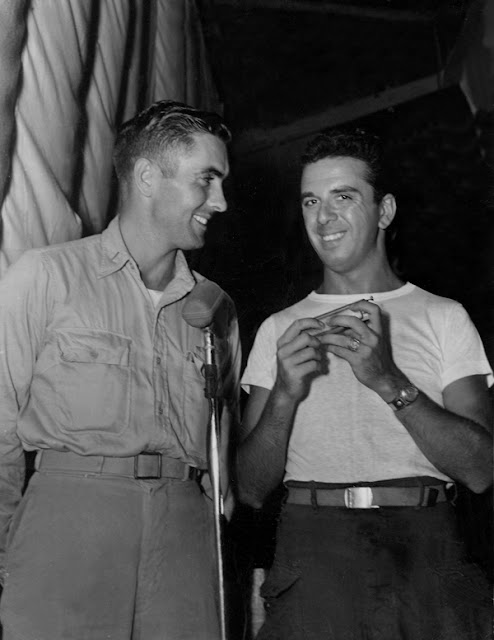 (above) Tyrone with popular harmonica player Jerry Adler, while serving in the South Pacific. 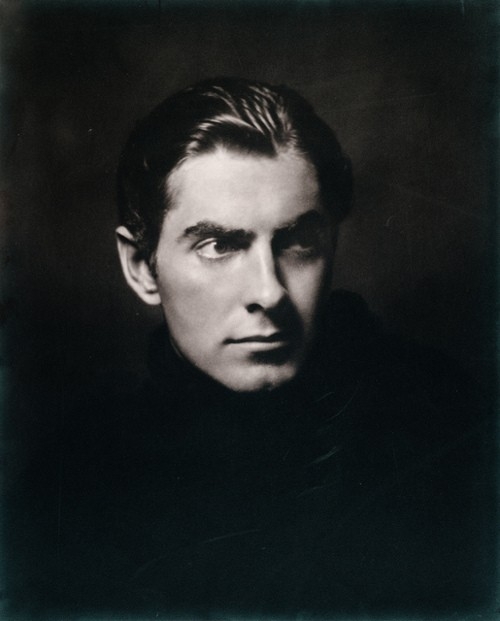