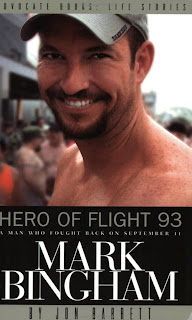 Mark Bingham (1970-2001) lost his life at the age of 31 while helping to defend our nation against a terrorist attack on September 11, 2001. The openly gay rugby player was one of the heroic passengers who led a revolt against the terrorists on board United Flight 93. The hijackers planned to slam the plane into the White House or the U.S. Capitol. Instead, the plane crashed into a field near Shanksville, Pa., killing the terrorists and passengers, but no one else. We will never know how many other lives were spared by this selfless, brave act.

Mark boarded Flight 93 at the last minute, on his way from NYC to California to be an usher in his fraternity brother's wedding. Flight 93 passengers soon learned from cell phone conversations that the World Trade Center and Pentagon had already been attacked. Bingham and other passengers formulated a game plan to overtake the hijackers, according to accounts from the phone calls. Bingham stood 6-foot-4, weighed 225 lbs., and played rugby. His three other on-board accomplices were also athletes. Mark’s mother is convinced their ability to think quickly, along with their physical strength, made a difference in stopping the plane from hitting its target.

Mark Bingham was survived by his partner of six years, Paul Holm, who said this was not the first time Bingham had risked his life to protect the lives of others. Mark was the only child of Alice Hoagland, who has since become a tireless advocate for issues that were important to her son. A retired flight attendant, she promotes aviation safety, supports rugby, and is a spokesperson for the gay community at large. It is at once heart rending and inspirational to witness her efforts and those of the gay rugby community as they develop a wonderful legacy that honors his memory. The Mark Kendall Bingham Memorial Tournament (Bingham Cup) is a biennial international rugby union competition, predominantly for gay and bisexual men, that was established in 2002 in his memory.

The Flight 93 Memorial is being dedicated today in Shanksville. Please take six minutes this weekend to remember Mark by watching his mother’s video (click link below). She is inordinately proud of her gay son, his bravery and his accomplishments. 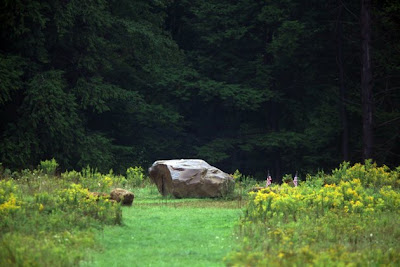 The California Alumni Association of the University of California (Berkeley) now annually awards the outstanding achievement of a young alumnus or alumna with the Mark Bingham Award for Excellence in Achievement at its Charter Gala each spring.
Posted by Terry at 12:09 AM