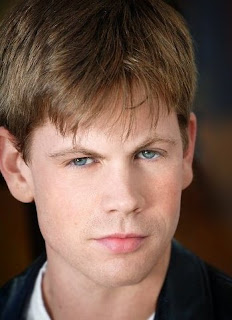 Christopher Rice, born in 1978, is a 33-year-old gay American writer who has penned five best-selling novels over a ten-year period:

They belong to the mystery/thriller genre, and each has gay characters who play prominent roles. His first novel (A Density of Souls) was published when he was just twenty-two years old. After Blind Fall, his novel about a gay marine, was published, Rice received death threats in reaction to his YouTube video about the book, in which he criticized the “Don’t Ask, Don’t Tell” policy.


Here’s the video that caused all that fuss:

For years Rice wrote a column in The Advocate, and most of them are archived on his literary web site:
www.christopherricebooks.com

He is the son of Anne Rice, author of all those “Vampire” novels and a notable S&M “Beauty” fairy tale trilogy (published in the 1980s under the pseudonym “A.N. Roquelaure”). After the death of her husband, Anne Rice moved to California to be closer to her son, who makes his home in West Hollywood, Los Angeles.
Posted by Terry at 10:26 PM