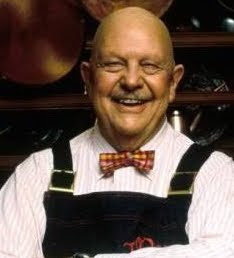 James Beard (1903-1985) was a chef and food writer, generally recognized as the father of American gastronomy. He moved from Portland, Oregon, to NYC in 1937 to study singing and acting. Failing to find a niche in the theatre scene, he and a friend opened a catering company called Hors D'Oeuvre, Inc. He compiled his catering recipes into a cookbook titled Hors D'Oeuvre and Canapés (1940), and by 1946 he was starring in a televised cooking show. His career as an eminent American food authority took off.

Julia Child described Beard succinctly: “Beard was the quintessential American cook. Well-educated and well-traveled, he was familiar with many cuisines but remained fundamentally American. He was a big man, over six feet tall, with a big belly and huge hands. An endearing and always lively teacher, he loved people, loved his work, loved gossip, loved to eat, loved a good time.”

James Beard was also homosexual. He was kicked out of Reed College in 1922 for being gay. In his memoir, he stated, "By the time I was seven, I knew that I was gay, and until I was about forty-five, I had a really violent temper."

He never achieved satisfaction from his awkward homosexual orientation, so food was Beard's consolation. Over the next forty years, Beard operated a cooking school out of his apartment in New York, wrote dozens of books on cooking and food, and hundreds of articles on food for many different magazines.

In 1955, he established The James Beard Cooking School. He generated further income and financed his cooking schools by signing endorsement deals with various food brands, although it was distasteful for him to do so. In 1981, he and Gael Greene founded Citymeals-on-Wheels, which continues to help feed the home-bound elderly in New York City.

Beard died in New York City of heart failure, at the age of 81. After his death in 1985, his friends and former students organized the purchase of his Greenwich Village residence to establish and permanently house the James Beard Foundation. It is North America's only historical culinary centre, a place where all are encouraged to savor the creations of both established and emerging chefs from around the globe. The annual James Beard Foundation Awards are given at the industry's biggest party, part of a fortnight of activities that celebrate fine cuisine and Beard's birthday. The awards ceremony honors the finest chefs, restaurants, journalists, cookbook authors and restaurant designers in the country.
Posted by Terry at 9:45 AM