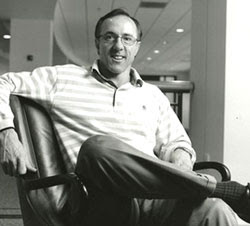 Richard Weiland (1953-2006) was one of the first five employees of Microsoft Corporation. A computer software pioneer and philanthropist extraordinaire, his life came to a tragic end by suicide at age 53. Two years after his death his estate announced that he had made the largest single bequest ever to the LGBT community: $65 million. Ric, as he was known, suffered from clinical depression and died from a self-inflicted gunshot wound to the head. He was survived by his partner, Mike Schaefer*.

High school classmates Bill Gates and Weiland were involved with the Computer Center Corporation and worked together to create a payroll program in COBOL and writing scheduling software for a school. After he graduated from Stanford University, Weiland was hired by Bill Gates in 1975, the same year Microsoft was founded in Albuquerque. As one of only five employees, Weiland was a lead programmer and developer for the company's BASIC and COBOL language systems. After a stint at Harvard Business School, he became project leader for Microsoft Works. Weiland was known as a brilliant programmer and a key contributor to the company's success, but in 1988 he left Microsoft to dedicate most of his time to philanthropy.

Ric was a donor to the Pride Foundation, the Lifelong AIDS Alliance, United Way of King County, the Fred Hutchinson Cancer Research Center, Stanford University, the Gay, Lesbian and Straight Education Network, AMFAR, The Nature Conservancy, and the National Audubon Society. He was influential as an active member of the Northwest gay community. A member of the Pride Foundation's board of directors from 1997 to 2001, he helped win the fight to get General Electric to include sexual orientation in their non-discrimination policy.

Weiland also was a quiet but key second round investor in gay online media company PlanetOut Corp. It is estimated that during his lifetime he contributed $30 million to over 50 organizations. A quiet philanthropist, he was known not to seek publicity for his generosity.

In 2008, Pride Foundation announced that Ric Weiland’s estate had bequeathed $65 million to support gay rights and HIV/AIDS organisations – the largest single bequest ever for the LGBT community. Weiland established a fund at the Pride Foundation that provides $46 million to 10 personally selected national LGBT and HIV/AIDS organizations and $19 million directly to Pride Foundation for scholarships and grants supporting the Northwest's LGBT community. The $65 million is among bequests totaling about $160 million – the bulk of Weiland's estate – to various charities and Stanford University. 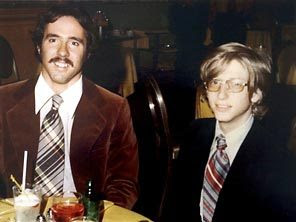 *A quote from Mike Schaefer:

My life partner, Ric Weiland, and I talked a lot about our options for giving away our wealth in our lifetimes. After all, why wait until you’re old and senile – or dead – to give to the causes you believe in? It made sense to have a thoughtful giving plan and the commitment to follow through on it while we had energy and intelligence. But Ric died tragically a good 20+ years sooner than planned: in 2006, at age 53. As one of the founders of Microsoft, Ric had a lot more financial resources than I. But we were clear from the beginning of our relationship that philanthropy was a core value that brought us together. We didn’t need or want a $2 million home. After Ric’s death, our family (which was small, just the two of us and 4 nieces and nephews) is just fine knowing the money has gone to support good causes.
Posted by Terry at 1:00 AM