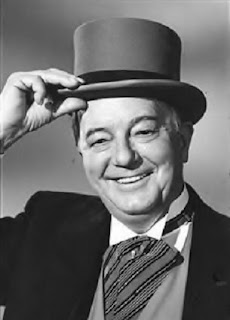 Actor Maurice Evans (1901-1989) was born in England (Dorchester, Dorset), but became an American citizen in 1941. U.S. television audiences (of a certain age) remember him as Samantha's father, Maurice, on the 1960s sitcom Bewitched*. Maurice often embellished his entrances and exits with strained Shakespearean verse**. He also played "The Puzzler" on Batman. Two films from the late 1960s made him a movie star, as well – he played the evolved orangutan Dr. Zaius in Planet of the Apes and Rosemary's friend Hutch in the psychological thriller Rosemary's Baby.

**For good reason. Most TV and movie fans, however, remain unaware of his extraordinary Shakespearean pedigree. Before he left England he joined the Old Vic Company in 1934, playing Hamlet, Richard II and Iago. His first appearance on Broadway was in Romeo and Juliet opposite Katharine Cornell in 1936, but he made his biggest impact in Shakespeare's Richard II, a hit production of the 1937 theater season, which led to his playing Hamlet (1938), the first time the complete, uncut version appeared on the New York stage. Margaret Webster directed him as Falstaff in Henry IV, Part I (1939), Macbeth (1941), and Malvolio in Twelfth Night (1942) opposite the memorable Viola of Helen Hayes. By this time he had become an American citizen.

During World War II he was in charge of an Army Entertainment Section in the Central Pacific and appeared in a 'G.I. version' of Hamlet, in which he shortened and edited the play to make Prince Hamlet more decisive and appealing to the troops, an interpretation so popular that he took it to Broadway in 1945. U.S. WW II veteran Bruce Guerin, in a YouTube interview, reminisces about his commanding officer, Captain Maurice Evans, whom he affectionately described as “gay as pink ink,” although a man without effeminate mannerisms, allowing him to blend in and be accepted by his fellow soldiers. An interesting aside is that bisexual actor (then a U.S. Navy enlistee) Farley Grainger was assigned to a WW II Hawaii-based military unit commanded by Maurice Evans. 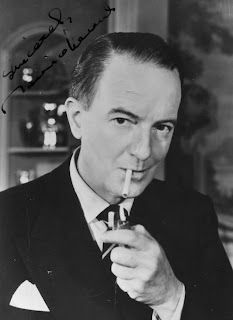 Evans also appeared in several plays by George Bernard Shaw, notably as John Tanner in Man and Superman and as King Magnus in The Apple Cart. He went on to produce successful Broadway productions in which he did not appear, notably Teahouse of the August Moon.

Evans lived in a converted stable (circa 1869) at 50 W. 10th St. in Greenwich Village. In the early 1960s he sold it to playwright Edward Albee, and it subsequently became the home of Jerry Herman, before he relocated to California. In the early years of the 20th century, Mark Twain and Hart Crane had lived on the same block.

Evans appeared in more American television productions of Shakespeare than any other actor. He also brought his Shakespeare productions to Broadway many times, playing Hamlet in 283 performances, a Broadway record that is not likely to be broken.Upon retirement Evans returned to the country of his birth and died of cancer in East Sussex, England, at age 87.

All his life Evans had a predilection for young male flesh. An oft-repeated anecdote is that his friend, business manager and former lover David "Taffy" Barlow made Maurice's last days all the more comfortable by hiring teenaged boys to strip off and lie on the bed next to him; this quite shocked some of his deathbed visitors (Source: Scott Michaels).

*Bewitched had one of the gayest casts in the history of television. There was Dick Sargent (Darrin Stephens), George Tobias (Abner Kravitz) and Paul Lynde (Uncle Arthur). Not to mention (rumored) bisexual Agnes Moorehead (Endora) and lesbian Diane Murphy (Tabitha). I feel a post about the Bewitched cast coming on. Stay tuned.