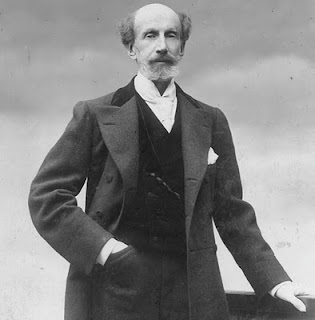 Prince Edmond (1834-1901) was a homosexual  aristocrat, noted composer and a descendant of an illustrious French family. His grandmother was a close friend of Queen Marie-Antoinette. His father was the Minister of State under French King Charles X and author of the July Ordinances of 1830, which revoked the Constitution, suspended freedom of the press, and gave the king extraordinary powers, including absolute power in the name of "insuring the safety of the state" (sort of like ex-president Bush and Homeland Security). Publication of that document resulted in the July Revolution that ended the reign of the Bourbons. The king and his family went into exile, and Jules de Polignac was condemned to life imprisonment and loss of civil rights. Despite the harsh sentence, visitation was allowed, and Edmond was born while his father was in prison.

In 1836 King Louis-Philippe granted the release of imprisoned cabinet members, including Edmond’s father, with the proviso that he leave Paris permanently. The family moved to Bavaria, near Landau. Edmond received a classical education there, including dancing and horseback riding. Early on Edmond demonstrated an inclination toward the creative arts, writing plays and comedies for the children's theatre built by his father. His elder brothers mocked him for his frailness and lack of athleticism.

In 1845 the family returned to France, and two years later Edmond’s father died. Edmond by now had determined that he would be a composer, though this dismayed his mother, who felt music was an acceptable hobby for an aristocrat, but not an acceptable profession. Depression and family pressure to marry ensued.

In 1861, at age 27, Edmond and his brother were founding members of the Cercle de l'Union Artistique, formed to promote performances of great music in venues other than theatres. Besides the aristocrats, the club included Gounod, Berlioz, Auber, and Catulle Mendès. Edmond began writing for the amateur male choral groups (orphéons) which had begun to proliferate in France, and he won prizes in composition.

In 1875 a new friend entered his life, Comte Robert de Montesquiou, a handsome and intelligent man twenty-one years his junior. They shared many interests, and most historians say they enjoyed a sexual relationship. Through Montesquiou's circle, Polignac made the acquaintance of Gabriel Fauré and became a member of the Société Nationale de Musique, where his compositions were performed alongside those of Chausson, Debussy, and Fauré. 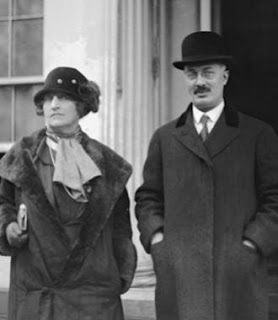 By 1892, Polignac, 57, inept with money and impoverished through poor investments, was destitute. The solution suggested by his friends was marriage to a woman of means. Polignac discussed the matter with Count Montesquiou, and out of these conversations the name of Winnaretta Singer (with Edmond at right), wealthy daughter of sewing machine tycoon Isaac Singer, was suggested. With her marriage to Prince Louis de Scey-Montbéliard annulled, she considered the possibility. Singer's social status would be improved by marrying another prince, and would cover for her lesbian sexual orientation. The couple was married in 1893, with the blessings of Pope Leo XIII. Their relationship grew into one based on profound love, mutual respect, understanding, and artistic friendship, expressed especially through their love of music. Note: Before I started this blog, I did not know the definition of a "lavender" marriage (between a homosexual male and a lesbian), but this one seems to be the most fortunate example I can think of.

The marriage freed Edmond to compose, and Singer was happy to promote his compositions. She became close with Edmond's niece, who was also a composer and musician, and Singer and Edmond hosted a music salon in her renovated atelier. With a vaulted two story ceiling and a Cavaillé-Coll pipe organ and two Steinways, the room became a haven for Paris's musical and artistic avant-garde. On Tuesdays, her organ evenings were especially sought after and featured the great performers of the day, including Widor, Gigout, Fauré, Vierne, and Guilmant. Marcel Proust was introduced to the Polignacs and  he was a regular in the Polignac salon, often attending in the company of his current love interest, composer Reynaldo Hahn, a mutual friend of the Polignacs.

Edmond and Winnaretta spent time touring Europe, acquiring a palazzo in Venice, and promoting Edmond's compositions. Edmond died of a febrile illness in 1901 at age 58.

After Polignac's death, the Princesse de Polignac became an important musical patron in her own right. She established a prize in music in her husband's name, and commissioned major works from Igor Stravinsky, Manuel de Falla, Erik Satie, Francis Poulenc (Concerto for Two-Pianos and the Organ Concerto) and Germaine Tailleferre (Piano Concerto). Until 1939, the Polignac salon was the foremost gathering-place for the artistic elite in Paris and Venice, including Jean Cocteau, Monet, Diaghilev and Colette. 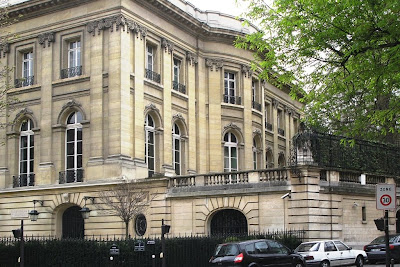 After Edmond's death in 1901, Winnaretta hired architect Henri Grandpierre in 1904 to renovate her mansion (above), located a few doors down from where Maria Callas lived until her death in 1977. Winnaretta created a charitable foundation in 1928, and until she moved to England in 1939 hosted cultural events here. The “salon de musique” was decorated by José-Maria Sert during the years 1910-1912, and the foundation continues to present concerts and lectures in the Polignac mansion's music room (detail below). 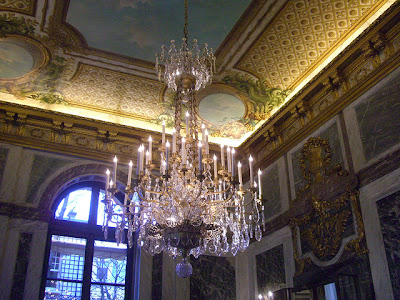 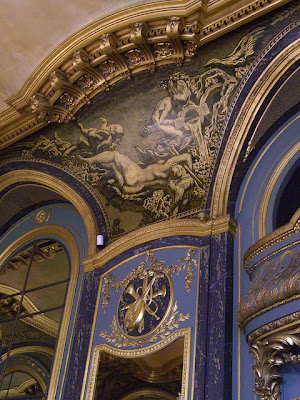