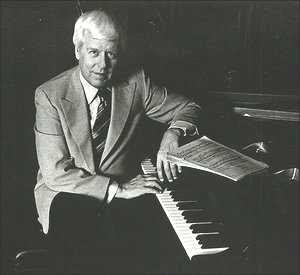 Earl Wild was one of the greatest virtouso pianists of the 20th century, often compared to Horowitz and Rachmaninov. Openly gay, Wild lived in Palm Springs, California, and Columbus, Ohio, with his domestic partner of 38 years, Michael Rolland Davis. Wild had an outsized talent and played flamboyantly. He specialized in piano transcriptions, performing the music of Lizst and Rachmaninov, but also arranged and composed extensively. In a nod to a fellow gay man, his Piano Sonata (2000) features a 4-minute toccata dedicated to Ricky Martin. Wild’s landmark piano fantasy on themes from Gershwin’s opera,  “Porgy and Bess,” was followed by his own solo piano settings of Rachmaninov and Gershwin songs. Wild lived to the ripe old age of 94. He died at home on January 23, 2010, of congestive heart disease.

Wild  was the first pianist to give a recital on television, in 1939. Nearly sixty years later, in 1997, he gave the first piano recital to be streamed live over the Internet. Over the course of his career, Wild played at the White House, gave annual recitals at Carnegie Hall (always sold out within minutes) and remained active until his final recitals and recordings in 2005.

Wild was also known as a formidable wit and saucy raconteur. When he was interviewed by David Dubal, Mr. Wild was asked about his years of playing flute in the United States Navy Band during World War II (Wild was stationed at a base outside Washington, DC). “Did you see any action?” Mr. Dubal asked. “Only in the cemetery,” Mr. Wild deadpanned.

Wild’s piano arrangement of “Mexican Hat Dance,” recorded at the age of 88! Guaranteed to put a smile on your face.

Earl Wild: Etude on Embraceable You (Gershwin)
Performed by Yeol-Eum Son
Wild’s Etudes on Gershwin’s popular songs are becoming staples of concert repertoire, especially as encores. I never thought it possible, but I think this performance actually surpasses Wild’s own interpretation. 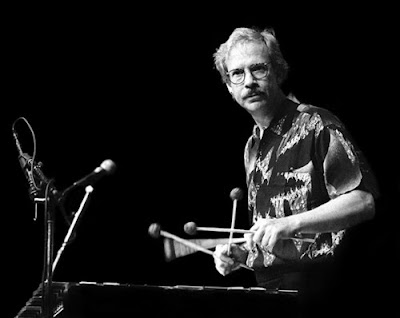 Gary Burton (b. Jan. 23, 1943) is an American jazz vibraphonist. After many years of marriage Burton came out as a gay man in 1985, making him one of only a few openly gay jazz musicians. He chose a public means to declare his homosexuality, by coming out during an interview on National Public Radio's "Fresh Air" radio show with Terri Gross. That interview is frequently re-broadcast. Burton fathered two children from his marriage to Catherine Goldwyn, granddaughter of movie mogul Samuel Goldwyn (of Metro-Goldwyn-Mayer fame).

Burton is the undisputed master of the vibraphone, not just a vibes player, but THE vibes player whose rule spans from the 1960s to the present. Today he lives in South Florida, where he shares a newly built house with his partner, Jonathan Chong.

A true original on the vibraphone, Burton developed a pianistic style of four-mallet technique as an alternative to the usual two-mallet style. This approach caused Burton to be heralded as an innovator. His sound and technique are widely imitated. But have a look and listen. Here Gary Burton plays a vibes solo (performance dating from the 1960s): “Chega de Saudade” (No More Blues), composed by Antonio Carlos Jobim and Vinícius de Moraes. Do your best to ignore the dated fringed jacket and concentrate on his mind-blowing four mallet technique.