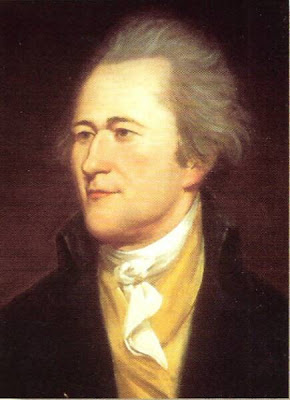 Alexander Hamilton was a United States Founding Father, soldier, economist, political philosopher, one of America's first constitutional lawyers and the first United States Secretary of the Treasury. As Treasury Secretary, Hamilton was the primary author of the economic policies of George Washington’s administration – specifically the funding of state debts by the Federal government, the establishment of a national bank, a system of tariffs and friendly trade relations with England. He became the leader of the Federalist Party, created largely in support of his views.

On March 3, 1777, forty-five year old President George Washington hired twenty-two year old Alexander Hamilton (1755-1804) to be his personal secretary and aide-de-camp, subsequently promoting him to lieutenant colonel. Of illegitimate birth and raised in the West Indies, Hamilton was educated in New York, where he lived with a 32-year old bachelor male haberdasher, Hercules Mulligan. After his studies, Hamilton was elected to the Continental Congress from that state. He resigned to practice law and subsequently founded the Bank of New York. In 1789, after Hamilton returned from further military service, Washington appointed Hamilton as the first ever Treasury Secretary of the United States. Many researchers suggest that Washington, who was in a life-long childless marriage, and Hamilton likely had an intimate relationship, as well (Hamilton was known to have intimate relations with both men and women). Washington’s otherwise warm relations with Hamilton turned somewhat frosty after Hamilton married a woman following the death of the object of Hamilton’s devotion, John Laurens (1754-1782).

Hamilton and Laurens had an intense, intimate relationship and often compared each other to Damon and Pythias* (!), a euphemism used to denote a devoted gay couple. In 1779, chiding Laurens for not corresponding as often as he would have liked, Hamilton wrote, "like a jealous lover, when I thought you slighted my caresses, my affection was alarmed and my vanity piqued." In 1781 Hamilton requested a transfer from Washington’s staff to be able to serve in combat with Laurens, and the request was granted. Hamilton and Laurens engaged in several military campaigns together, but Laurens was tragically killed in a skirmish in 1782. Hamilton was completely devastated.

*In Greek mythology, Pythias, who had been condemned to death by Dionysius, wanted to return home first to put his affairs in order. Damon agreed to be put to death in his friend’s stead, should Pythias not return to face his execution. Pythias returned as promised, sparing Damon’s life. Dionysius was so impressed by the friends’ devotion to each other that he pardoned Pythias and asked to be friends with the two lovers.

Four months prior to John Laurens’s death on the battlefield, Hamilton wrote to Laurens playfully suggesting that Laurens find a wife for him, offering an exaggerated and amusing description of the ideal candidate’s appearance, personality and financial standing ("as to fortune, the larger stock of that the better"). Hamilton then withdrew the suggestion, writing, "Do I want a wife? No – I have plagues enough without desiring to add to the number that greatest of all." 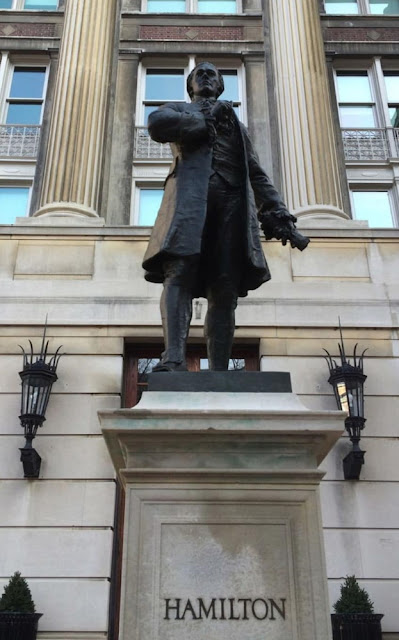 Yet Hamilton did marry late the following year, entering into a union with the daughter of one of the wealthiest men in New York City, where Hamilton resumed his law practice. After the war he  participated in the Constitutional Convention of 1787. When he became president, Washington appointed Hamilton the nation’s first ever Secretary of the Treasury in 1789. However, Hamilton left the poorly-paid Treasury position in 1795 to resume his more lucrative law practice, but he remained a valued adviser to the president and a leader of the Federalist Party.

When the contentious presidential race of 1800 ended in an Electoral College tie, the House of Representatives was charged with resolving the impasse. Hamilton famously put the good of his young nation above party loyalty. Because he believed the Federalist candidate, Aaron Burr, would be a disastrous president, Hamilton went on a campaign to urge his fellow party members to vote instead for his longtime political adversary, Thomas Jefferson. Aaron Burr, who received the second highest number of votes, became Vice President, but he  never forgave Hamilton for his defeat. When Burr ran for governor in New York State in 1804, Hamilton's influence in his home state was strong enough to prevent a Burr victory. Taking offense at some of Hamilton's comments, Burr challenged him to a duel in July, 1804, and wounded Hamilton, who died of his injuries shortly thereafter.

Although Hamilton had a fruitful marriage (and eight children), researchers and biographers deem that Hamilton’s relationship with Laurens was the most important romantic and emotional bond of his life. Earlier biographers edited out the most embarrassing and damning paragraphs from Hamilton’s effusive letters to Laurens, but a 1902 biography relates that Laurens "took Hamilton by storm, capturing judgement as well as heart, and loving him as ardently in return." In describing Hamilton's reaction to the death of Laurens, "Hamilton mourned him passionately, and never ceased to regret him. Betsey [Schuyler Hamilton, his wife] consoled, diverted, and bewitched him, but there were times when he would have exchanged her for Laurens." She added, with some regret, "The perfect friendship of two men is the deepest and highest sentiment of which the finite mind is capable; women miss the best in life." Hamilton's grandson, Allen McLane Hamilton, wrote that many of his grandfather's male friends were attracted to his "almost feminine traits." So there you have it. 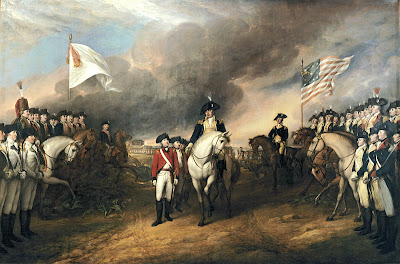 Hamilton and Laurens are depicted standing together on the "Surrender of Cornwallis" commemorative U.S. postage stamp released in October of 1981. The stamp was based on a  painting of the same name commissioned by the U.S. Government in 1817 from painter John Trumbull. In the extreme right of the painting, Hamilton, with hands clasped in front of him, stands in the front row immediately to the right of the ash colored horse with the prominent neck; the similarly dressed John Laurens stands next to him (click to enlarge). This painting hangs in the rotunda of the U.S. Capitol building.

And of course, Hamilton’s image graces the U.S. ten-dollar bill in commemoration of the first U.S. Secretary of the Treasury. 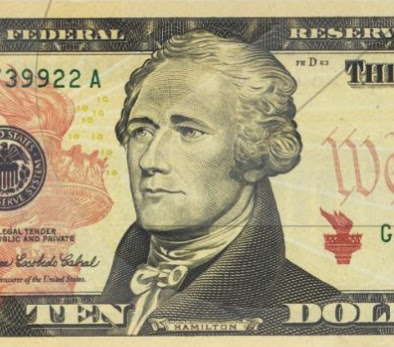 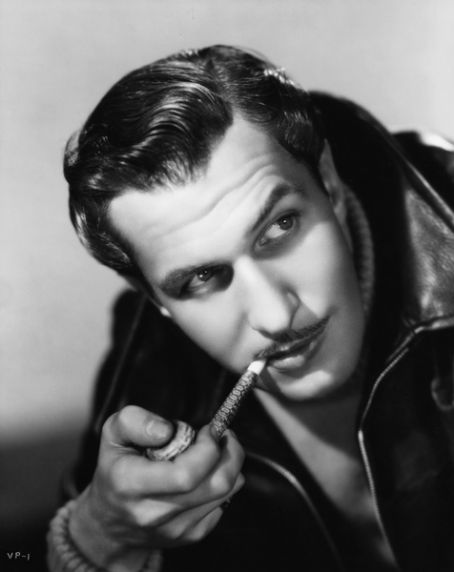 On the set of the film Gods and Monsters, gayness was the subject of lunch discussion among the cast and crew. "Was Vincent Price gay?" someone asked, to which Sir Ian McKellen loudly replied, "Well, he was married to Coral Browne, wasn't he?!"

Vincent Leonard Price, Jr. (1911-1993) was married three times, the last a lavender marriage to lesbian actress Coral Browne. Upon their engagement, the Australian born Browne told critic Bernard Drew: "We've both decided to give up boys". In order to marry, Price converted to Catholicism, and Coral Browne became a U.S. citizen. 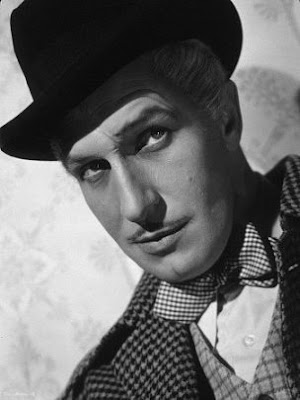 Vincent Price was an accomplished art critic and collector, a gourmand, a generous benefactor to those in need, a concerned and active political man, a devoted father – and a celebrated actor (who had a drinking problem). His bisexuality was an open secret to Hollywood insiders, and Scotty Bowers’s recent Hollywood tell-all book, Full Service, mentions that Price used his services to procure men, and Browne to procure women, for sexual gratification. But Price’s sexual predilection was surely the least interesting thing about him.

Price had a “grey” listing by the House Un-American Activities Committee hearings during the McCarthy era, and he made a somewhat shocking deal with them. He was a noted art lecturer in London. Price was involved in the 1959 rigged TV quiz-show hearings for his part in The $64,000 Question. He witnessed the Nazi regime first-hand while living overseas, even attending one of Adolph Hitler's many rallies. He played a young parasitic playboy from Kentucky in the Oscar-winning film Laura (1944, with Clifton Webb and Gene Tierney). Price graduated from Yale, plied the London stage, wrote a cookbook (A Treasury of Great Recipes, 1965), bore a son and a daughter (Victoria, a lesbian who wrote a book about her father), and developed a fine art sales division (1962-1971) for Sears-Roebuck (!). In the late 1960s he played the villain Egghead on ABC’s Batman television series. Back in the 1940s and 50s he was a popular radio actor (The Saint), while decades later Price provided a Sprechstimme “rap” contribution to Michael Jackson’s 1983 Thriller song track and video. He hosted BBC radio and PBS television series. In 1976 he was a featured guest on The Muppet Show. And that’s not the half. 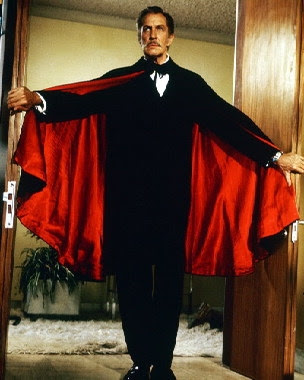 Somewhere in there I forgot to mention the horror movies, his greatest legacy. Price's first venture into the horror genre was the 1939 Boris Karloff film Tower of London. There followed House of Wax (1953), The Fly (1958) and a string of movies based on the writings of Edgar Allan Poe: House of Usher (1960), The Pit and the Pendulum (1961) and The Raven (1963) chief among them.

Not bad for the son of a candy company president from St. Louis (Vincent Leonard Price Sr.). A lifelong smoker, Price died of lung cancer in 1993 at the age of 82, by which time he had packed in enough activity for three or four lifetimes. If you find yourself in the Los Angeles suburb of Monterrey Park, stop by the East Los Angeles College campus to visit the Vincent and Mary Price Gallery and the Vincent Price Art Museum, the repository of Price’s art collection, comprising some 9,000 items valued at more than $5 million. 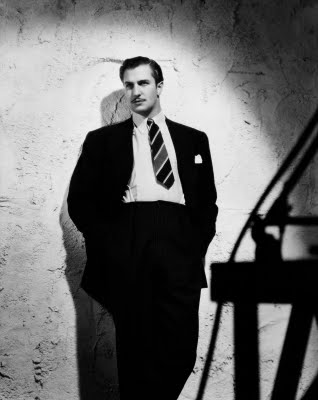 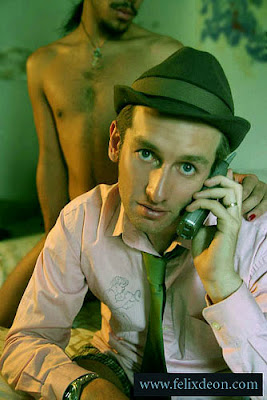 Born in Guadalajara, Mexico, artist Felix d'Eon had a Mexican mother and a French father. Upon his father’s death while Felix was still a boy, the family moved to Pacific Palisades area of Los Angeles. Felix demonstrated an early aptitude for art and began drawing students, boyfriends, and other members of his swim team while he was in high school.

At age 15, his mother enrolled him in figure drawing courses at a local community college, but shortly thereafter Felix and his brother ran away from home and spent nearly a year living on a beach in Mexico, then working as models in Mexico City, drawing sidewalk portraits and at times being “kept boys.” Upon returning to Pacific Palisades and graduating from high school, Felix went to live in San Francisco, where he graduated with honors from the Academy of Art University. 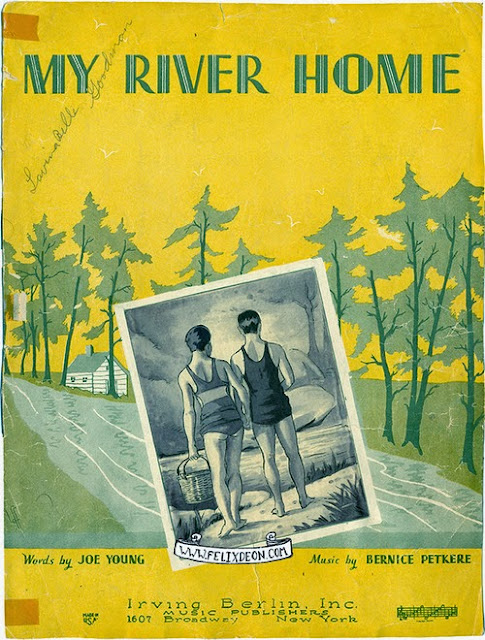 Much of D’Eon’s art is evocative of a Victorian style, although far more explicit than would have been allowed in those times. Your blogger first became aware of d’Eon when a reader sent an image of a vintage sheet music cover with an R-rated illustration incorporated into the design. Rather startling, because it looked authentic. He has also completed portfolios of super-hero comics, book covers and the like. His web site is NSFW, and accordingly, most examples of his art cannot be shown on this blog. 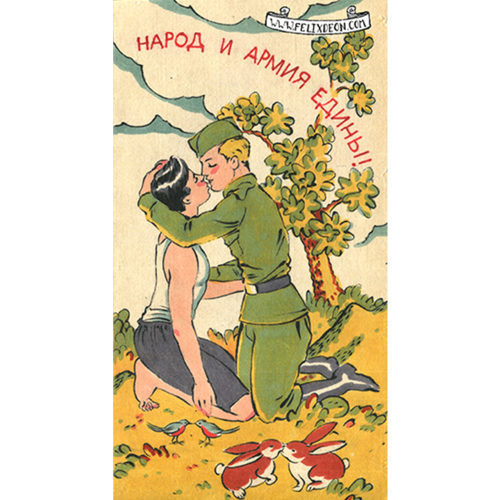 Do yourself a favor and amble on over to d’Eon’s Instagram site to have a look at his singular illustrations. 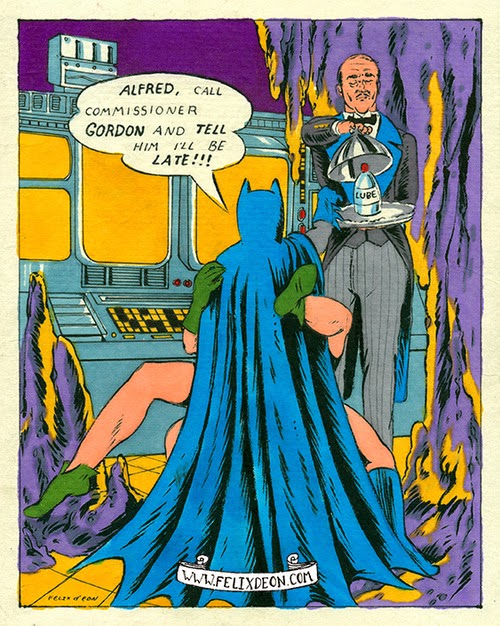