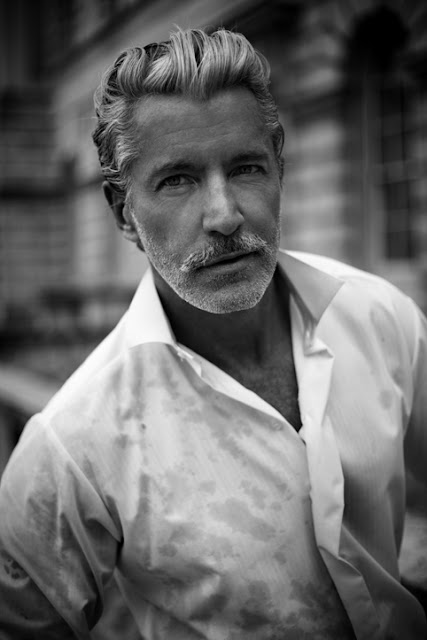 Shaw made over 50 pornographic films, earning several industry awards along the way. He stood out from the pack of blonds and their smooth all-over-tanned bodies. Shaw didn’t shave his chest and obviously didn’t sunbathe in the nude – in fact, his sharply defined tan line became a trademark. He was further distinguished by his British accent, although his porn roles required limited use of his speaking voice. Shaw’s screen persona was that of a traditionally handsome natural man possessed of a spectacularly generous endowment (and a rose tattoo on his arm). In fact, his penis was as much discussed in the 1990s as international playboy Porfirio Rubirosa’s(*) was in the 1930s (we're all of us too young to remember – just Goggle him). Many of Shaw’s fans noticed a startling facial resemblance to Richard Gere (see photo below).

*OK, I've received numerous E-mails about this, so here's a hint. To this day in Paris, if a restaurant patron wants one of those tall wooden peppermills, he says, "Waiter, may I please have a Rubirosa?" I kid you not. 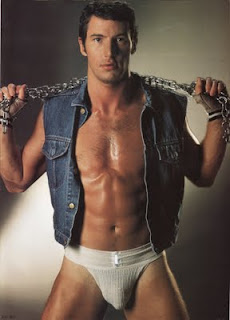 Nevertheless, it is difficult to reconcile his current appearance as a classically handsome, mature man with salt and pepper hair and a beard with his actual age – 52. He looks years older, in a good way. Talk about aging gracefully.

The first chapter of his autobiography, My Undoing: Life in the Thick of Sex, Drugs, Pornography and Prostitution (2006), begins: “All I could see were pretty shapes and colours, my dick going in and out of his white cheeks.” From his days as an escort, his comment on how to have sex with men who repulse him: “Well, the thing is, very few men physically repulse me. Like a good whore, I can always find something about a man that I like.”

From an interview with Daniel Lee in NYC in 2003:

DL: What makes you laugh hardest?
AS: Getting treated special because I have a big dick.

DL: Would you prefer not to be treated special because you have big dick?
AS: No way! 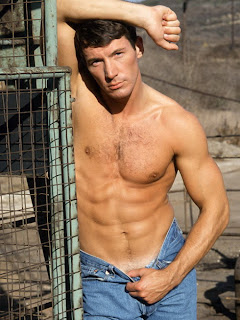 Shaw’s writing is described by Michael Musto of The Village Voice as prose that “can tug at your heartstrings and your crotch at the same time.” His first novel, Brutal, appeared in 1996, the same year he published a collection of poems titled If Language at the Same Time Shapes and Distorts Our Ideas and Emotions, How Do We Communicate Love? (it sold out), followed by two more novels, Boundaries (1997) and Wasted (2001).

Shaw completed a master’s degree in Creative Writing in 2007 at Goldsmiths University of London, followed by publication of a second autobiography, Sordid Truths (2009). In 2011, Shaw completed training to become a qualified English teacher.

Shaw was recently profiled in the Spring/Summer 2012 issue of Hercules Universal – One Last Colony, the Havana Affair – in which he models luxury men’s clothing (click on link).

At present Mr. Shaw divides his time between residences in London and Barcelona. In 2016 he reverted to his birth name: Aiden Brady. Here is a sampling of his recent modeling work. You're welcome. 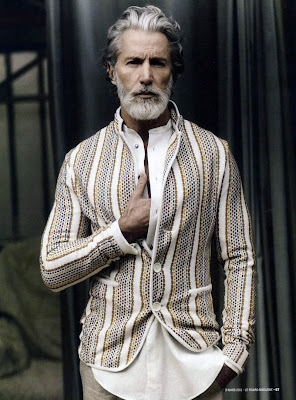 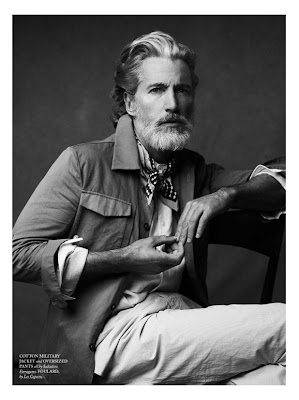 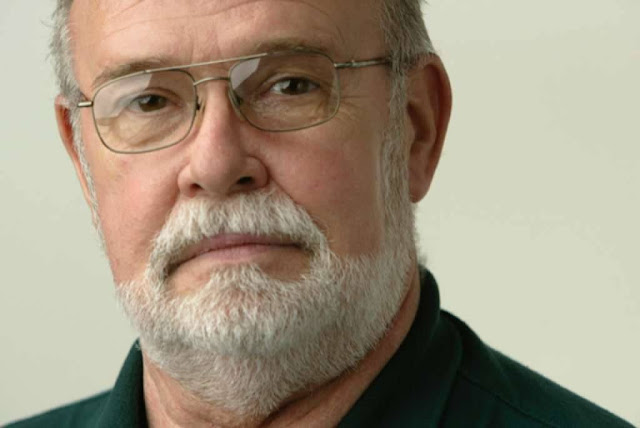 Before Houston, TX, native Ray Hill became a galvanizing gay activist, he had been a Baptist evangelist and a convicted burglar who served four years in prison. Not a typo.

Mr. Hill, who died November 24,  was a larger-than-life character who said, "I was born to rub the cat hair the wrong direction." He described his occupation as a "journeyman-quality hell raiser, and on his business cards the words "Citizen Provocateur" were printed under his name. He partnered with San Francisco city supervisor Harvey Milk to organize the 1979 National March on Washington for Lesbian and Gay Rights. 80,000 activists showed up. But the second national march he helped organize drew more than 200,000 people in 1987, the largest gay rights demonstration in history.

A renowned radio broadcaster, he co-founded KPTF-FM in Houston, where he started a program on LGBTG issues. In 1980 Texas prisoners could not call home to speak to immediate family or close relatives. Although Hill lobbied for a 2007 state law allowing such, his prior efforts resulted in radio's "The Prison Show" with a call-in segment that allowed families to update inmates with greetings, family details and news of births and deaths and such trivialities as children's soccer game scores.

He bullied Anita Bryant in 1977 but campaigned for several female politicians, most notably Annise Parker, who became Houston's first gay mayor in 2010. But that's not all. When his sister died in an automobile accident in 1977, Mr. Hill raised her two children. In fact, his entire life became a legacy of service to others.

After losing his left leg and right foot to diabetes, he resided at Omega House in Houston, a hospice center he helped establish in the 1980s. He had been hospitalized earlier this year with heart problems. His funeral was held yesterday on the steps of Houston's City Hall, where Mayor Sylvester Turner delivered a statement that called Mr. Hill a warrior in the fight for gay rights, human rights and criminal justice reforms. 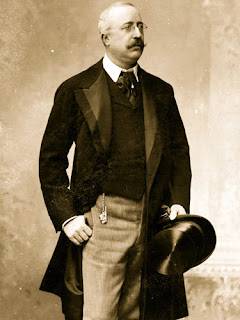 The multimillionaire German steel industrialist F. A. Krupp (1854-1902) loved the Italian island of Capri, off the coast of Naples, where he resided for several months each year at the Hotel Quisisana*. He kept two yachts there, Maya and Puritan, from which he entertained and pursued his hobby of oceanography. He could well afford to, since his father – Alfred, the Cannon King – had amassed the largest personal fortune in Germany. Alfred's power was so great that crowned heads negotiated directly with him.

While on the island, Krupp (known all his life as Fritz)  indulged his homosexual leanings in a big way. He set up a lavish private pleasure club in a grotto, where he entertained underage Italian boys, mostly the sons of local fishermen. Man on man sex was performed to the accompaniment of a live string quartet, and orgasms were celebrated with bursts of fireworks. Solid gold pins shaped like artillery shells or two crossed forks, both designed by Krupp, were given to the boys if they performed well. I'm not making this up.

When Krupp's wife, back home in Germany, heard rumors of what was going on, she went straight to Kaiser Wilhelm II, who promptly had her committed to an insane asylum in Jena. The thinking was that the Krupp industrialist empire (steel and arms manufacturing) was too vital to German national security to be compromised, even if such lurid stories were deemed true. Besides, Fritz was an important philanthropist who advanced the study of eugenics, which was later to become associated with the Nazis. The company lives on today as Thyssen-Krupp AG, the result of a controversial merger completed in 1999. The new company operates worldwide in steel manufacture, capital goods (elevators and industrial equipment) and services (specialty materials, environmental services, mechanical engineering, and scaffolding services).

But I digress. Krupp’s homosexual tastes predated his holidays on Capri. Conrad Uhl, proprietor of the Hotel Bristol in Berlin, related that he was charged with supplying Fritz with young boys when he stayed there. However, the German press eventually found out about Krupp's illicit private affairs, and printed the whole story, complete with damning photographs taken by Krupp himself inside the grotto on Capri. On  November 15, 1902, the Social Democratic magazine Vorwärts reported that Friedrich Alfred Krupp was homosexual, that he had a number of liaisons with local boys and men, and that his principal attachment was to Adolfo Schiano, an 18-year-old barber and amateur musician who lived on Capri. A week later, Krupp requested a meeting with his close friend, Kaiser Wilhelm II, whose circle of friends included many prominent gay men. On the day he was to meet the emperor, November 22, 1902, Krupp was found dead in his home. Rather than face disgrace, Krupp had committed suicide; he was 48 years old at the time.

The suicide was covered up, and his body was concealed in a casket with no autopsy, even though law required it. No one, not even close relatives, was allowed to see the body. After three days, Germany had a great memorial ceremony involving the Kaiser, who was closely allied to the family. When Fritz was laid to rest in the Krupp family cemetery in Essen, his tomb was guarded day and night. 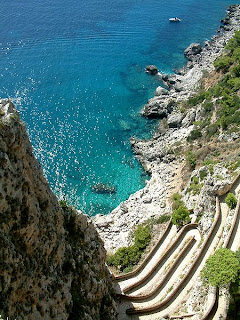 Ten years ago, when I first visited Capri**, I looked down in wonder from the Gardens of Augustus to the switchback paved footpath known as the Via Krupp, a scenic walkway constructed by Fritz in 1900. Ostensibly Via Krupp was a connection for Fritz between his rooms at the Hotel Quisisana and Marina Piccola, the small port where his marine biology research ship (ironically named the Puritan) lay at anchor. Secretly, however, this path conveyed him to Grotta di Fra’ Felice, the grotto where sex orgies with local boys took place. When the scandal surfaced, Krupp was asked to leave Italy in 1902, and a week  after his return to Germany his life was over.

*The Grand Hotel Quisisana is today a member of Leading Hotels of the World.
www.quisisana.com/en/index

**At the time I had no knowledge of this lurid tale. Today there is a small family-run three star hotel called Villa Krupp on Capri which many people mistakenly believe was built by Fritz Krupp. However, this structure was built as a private villa in 1900 by Eduardo Settanni. By the way, Capri was then known as the gay capital of Europe, hosting hordes of lesbians and gay men, who could pursue their interests openly. Tip: remember to pronounce Capri with the accent on the first syllable (KAH-pree).

Photo below: On Capri Fritz Krupp satisfies his "needs," which leads to disaster (Auf Capri geht Fritz Krupp den Bedürfnissen nach, die ihm schließlich zum Verhängnis werden) – a scene from the 2009 three-part German TV miniseries, Krupp – Eine Deutsche Familie. In this scene Krupp (center) brings one of the local boys back to his hotel to "satisfy his needs." 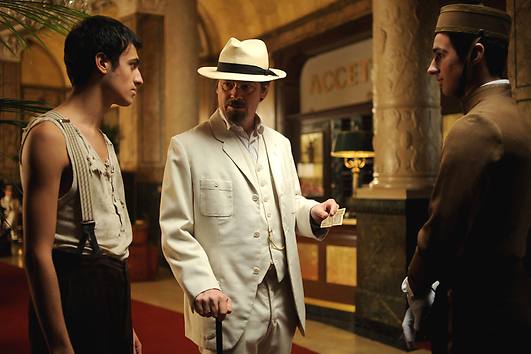