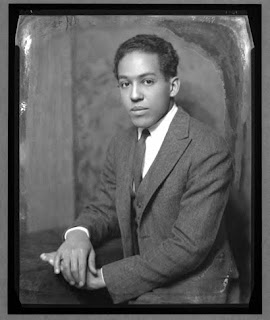 Born February 1, 1902, Langston Hughes, a deeply closeted gay man, was an African-American poet, novelist, lecturer, columnist and playwright who became one of the foremost interpreters of racial relationships in the United States. Born in the south, he dropped out of Columbia University to experience the world of jazz and nightclubs and went on to become a major component of the Harlem Renaissance of the 1920s. He was one of the innovators of the new literary art form called jazz poetry. He worked menial jobs, and was “discovered” as a poet while working as a busboy at the Wardman Park Hotel in Washington, DC. The story goes that Hughes dropped his poems beside the poet Vachel Lindsay's dinner plate, and Lindsey included several of them in his next poetry reading. Lindsay’s interest and support launched a major career for Hughes.

This event spawned a local chain of restaurants in the Washington, DC area called “Busboys and Poets” (your blogger has enjoyed many evenings there drinking, dining, playing cards, watching films and taking in live shows and poetry readings). Hughes, who went on to become one of the first black authors who could support himself by writing, became a friend of Ernest Hemingway, with whom he attended bullfights. He wrote lyrics for “Street Scene,” an opera by Kurt Weill and Elmer Rice, as well as screenplays for Hollywood films. His original works portrayed people whose lives were impacted by racism and sexual conflicts; he often wrote about southern violence. However, he felt he had to remain sexually closeted in order to maintain the financial support and respect of various black churches and other cultural institutions.

Hughes had more life experience to draw upon than most, and his world view was vast. Having been born in the segregated deep south of Joplin, Missouri, he later lived in Mexico, Paris and Italy. He worked as a seaman on jaunts to Africa and Europe, spent a year in the Soviet Union, and served as a Madrid correspondent for the Baltimore Afro-American.

His career successes helped break the chains of poverty into which he had felt trapped. For the last twenty years of his life he owned his own home in Harlem, a brownstone at 20 E. 127th Street.

In 1967, Hughes died at the age of 65 from complications after abdominal surgery, related to prostate cancer. He left an enduring legacy.

A poem written when Hughes was 18 years old:

“The Negro Speaks of Rivers”

I bathed in the Euphrates when dawns were young.
I danced in the Nile when I was old
I built my hut near the Congo and it lulled me to sleep.
I looked upon the Nile and raised the pyramids above it.
I heard the singing of the Mississippi when Abe Lincoln
went down to New Orleans, and I've seen its muddy
bosom turn all golden in the sunset.

Sources: Wikipedia, Charles H. Hughes, The Oxford Companion to African American Literature (1997), Out Magazine
Posted by Terry at 10:14 AM 3 comments: