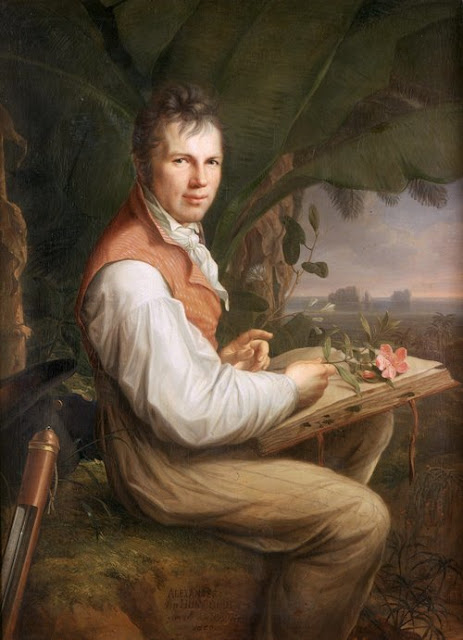 Alexander von Humboldt (1769-1859) was one of the most influential scientists and thinkers of his day, considered second only to Napoleon in influence on Europeans. This Prussian-born geographer, naturalist, explorer and illustrator was a prolific writer, the author of a 23-volume work on his travels and of the seminal Cosmos, which laid the foundations for modern physical geography and meteorology. He also left a lasting impression on American visual arts, sciences, literature and politics by inspiring a network of like-minded individuals who would go on to embrace the spirit of exploration, decry slavery, advocate for the welfare of Native Americans and extol America's wilderness as a signature component of our nation's sense of self.
Humboldt is the namesake of a major Pacific current as well as  numerous cities, counties, and other landmarks. In fact, more places and species are named after Humboldt than any other person. To this day things continue to be named after him. When the grand, rebuilt City Palace (Stadtschloss) in Berlin partially opened a month ago, on December 17, 2020, it was known as the Humboldt Forum. Humboldt was born and died in Berlin, and the forum’s opening was originally intended to be on September 14, 2019, exactly 250 years since the day Humboldt was born in 1769. No matter how late it has come to the party, it will be the German equivalent of the British Museum, a world-class forum for the arts and sciences.

During his lifetime Humboldt’s same sex attraction was widely noted. While some biographers say that there is no “proof” that he was gay, there is plenty of incriminating evidence. When he died, his sister burned all of his love letters. Humboldt left his entire estate to his male “servant,” Johann Seifert, who was some thirty years younger. During the nineteenth century, a common way to “hide” a same sex relationship was to pass off one’s lover as a servant, especially if the two were of different social classes. Humboldt was of the monied class; Seifert was not. Humboldt was also somewhat effeminate and had masochistic tendencies. Seifert was domineering and bullying by nature. To your blogger, this seems a perfect fit.

When Humboldt was 25 years old he met a 21-year-old Lieutenant named Reinhard von Haeften. Humboldt was so besotten with von Haeften that he desired his presence at all times, so Humboldt invited him to live under his own roof. At Humboldt’s invitation and patronage, the two traveled extensively. Humboldt used the code letter “R” when referring to von Haeften in letters to colleagues and friends (wonder why?). This went on for two years, and after von Haeften married his pregnant fiancée, Humboldt lived with the newlyweds for six months. Must have been cozy. In fact, Humboldt was so brazen that, before the marriage, he contacted von Haeften’s fiancée to tell her that he had found the perfect house in Switzerland for the three of them to live in. As if.

Likewise with esteemed French botanist Aimé Bonpland, another favored male companion who lived and traveled with Humboldt for five years. In attentive detail they wrote descriptions of the "masculine beauty" of South American Indians. From 1799-1804 they explored the Amazon and Orinoco rivers, the Andes mountains and parts of Venezuela, Peru, Ecuador, Colombia and Mexico, collecting specimens of rocks and plants. They investigated volcanoes, ocean currents, the earth’s magnetism, climate and animal life. Humboldt funded this five-year exploration with his own inheritance.

Humboldt died from a stroke at age 89, but he was still publishing scientific works right up to the time of his death. When biographers started poking around, they discovered letters written to friends and travel companions that revealed that Humboldt had been amorously corresponding with men. Even skeptics admit that it seems hard not to confirm that Humboldt was gay. But further "proof" went up in flames, literally, when Humboldt's sister burned all his love letters. And why might that have been? Hmmm.....