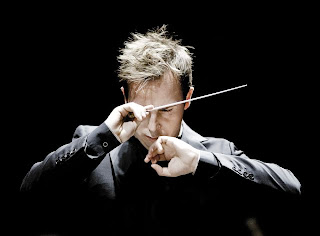 (Updated since the original 2013 post) A native of Montreal, Canada, Yannick Nézet-Séguin (Yah-NEEK neh-ZAY Say-GAN) (b. 1975) was first named Music Director of The Philadelphia Orchestra in 2012, and subsequent contract extensions assure this position through the 2025-26 season. This makes him the first openly gay conductor of one of the "big five" orchestras in the United States.

Since 2000 Mr. Nézet-Séguin has also been Artistic Director and Principal Conductor of the Orchestre Métropolitain (Montreal), and he has conducted all the major ensembles in his native Canada.

He was also Music Director of the Rotterdam Philharmonic Orchestra from 2008-2018, and today holds the title of Ehredirigent (honorary conductor) of that organization. 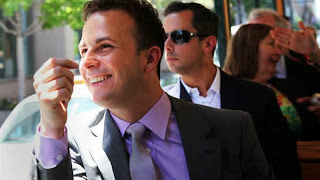 Mr. Nézet-Séguin’s partner of sixteen years, Pierre Tourville (shown in sunglasses behind Yannick), is the assistant principal violist of the Orchestre Métropolitain (Montreal), and they appear everywhere together. When the conductor was fêted by the city of Philadelphia some years ago, Pierre Tourville was also introduced at every stop – amazing, considering the tortured history of gay conductors. After all, Leonard Bernstein had married a woman at the advice of famed conductor Dmitri Mitropoulos, and both those men led closeted lives.

In a New York Times profile by Daniel Wakin, it was reported that “Nézet-Séguin is what the orchestra world is desperate for: a young, charismatic maestro who can win the respect, even affection, of grizzled orchestra veterans, the enthusiasm of audiences and the praise of critics, which has for him been pretty exalted.”

The 46-year-old conductor’s youth is reflected in his flouting of certain traditions – he frequently leads from the podium in a business suit and tie (Carnegie Hall), and he’s partial to tight V-neck sweaters and skinny jeans. Many times he conducts without a baton, in the style of Mitropoulos. While on vacation in Tahiti he acquired a turtle tattoo on his right shoulder, and his compact five-foot-five frame bursts with energy. 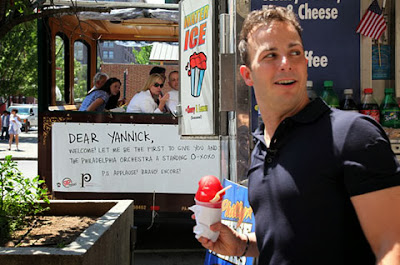 Again from Mr. Wakin’s NYT profile: “He seemed stunned by the ovation” (conducting the Philadelphia Orchestra in Verdi’s Requiem at Carnegie Hall). “Applause from his inner circle greeted him in the crowded dressing room. Attendants broke open bottles of sparkling wine. Mr. Nézet-Séguin embraced his companion, Mr. Tourville, looked him in the eyes and said, ‘Oui?’ 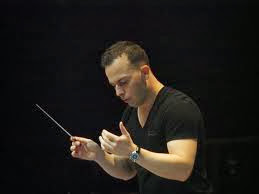 The conductor’s honors include a prestigious Royal Philharmonic Society Award, Canada’s highly coveted National Arts Centre Award and the Prix Denise-Pelletier, the highest distinction for the arts in Quebec, awarded by the Quebec government.  In 2011, he received an honorary doctorate from the University of Quebec in Montreal and was appointed a Companion of the Order of Canada in 2012.
Posted by Terry at 5:35 AM 7 comments: 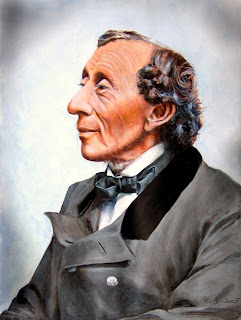 Hans Christan Andersen (1805-1875), known as the father of the modern fairy tale, was forced to go to work at the age of eleven, when his father died insane. Hans was apprenticed to a weaver and tailor in Odense and later worked at a tobacco factory. He had a high pitched voice and effeminate mannerisms, and once his trousers were pulled down when other workers suspected that he was a girl. At the age of 14 Andersen left Odense for Copenhagen to seek a career as a singer, dancer or an actor – he had a beautiful soprano voice. Eventually he was able to find sponsors to pay for his education. Andersen was an eccentric, overly sensitive student and exceptionally tall, almost ungainly, with an enormous nose that marred his looks. His feet, arms and legs were disproportionately large for his frame. In his later fairy tales, a common theme was that the ugly physical appearance of the hero often concealed great inner beauty, not revealed until after a series of misfortunes. He knew what he was writing about.

Andersen managed to publish his first novel upon graduation in 1829 and went on to become Denmark’s leading man of letters, writing novels, dramas, poetry, travel books and autobiographies. In 1837, at the age of thirty-two, he began writing the fairy tales for which he was known throughout the world. Andersen traveled across Europe and Africa, and was once hosted by Charles Dickens in England, although Dickens was nearly driven mad by Andersen’s prissy, effeminate ways and hypochondriacal bent.

Biographers tend to label Hans Christian Anderson as bisexual, and a few even suggest that he may have remained celibate for his whole life. However, he engaged in many romantic relationships, especially with young men, with whom he exchanged torrid letters. Many of his fairy tales were autobiographical, especially those that describe impossible love and poor self image, such as The Ugly Duckling* and The Little Mermaid. Andersen’s The Shadow is a fairytale that parents seldom read to their children, because it's so disturbing. It suggests that each of us has a shadowy part that will, if we let it, destroy us.

*From "The Ugly Duckling":
“He now felt glad at having suffered sorrow and trouble, because it enabled him to enjoy so much better all the pleasure and happiness around him; for the great swans swam round the new-comer, and stroked his neck with their beaks, as a welcome.”

His statue in Central Park (NYC) features the author sitting and reading to a stray duck. The 1956 sculpture by Georg J. Lober was constructed with contributions from Danish and American schoolchildren. It was cast at the Modern Art Foundry in Astoria, Queens. 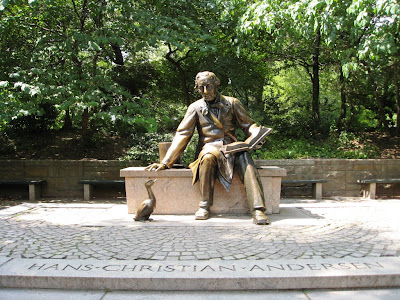 Upon his death in 1875, his private journals were discovered, in which he detailed his enthusiasm for masturbation. He placed a cross mark in his journal for every time he masturbated. I kid you not. In the book “Hans Christian Andersen: The Life of a Storyteller,” Jackie Wullschlager writes of the open love letters Andersen wrote to handsome young men. He also wrote similar letters to a few women, such as the soprano Jenny Lind, but the women were always unapproachable and out of his league. His letters to young men were obviously an outlet for his sexual desire and his sensuous, romantic nature. Andersen's novel, O.T., depicting an intimate male friendship, was influenced by his unrequited love for Edvard Collin, whose eventual marriage sent Andersen into a tail-spin. When Andersen died, he was initially buried next to Collin and his wife Henrietta, until descendants of Collin had the bodies of Edvard and Henrietta re-interred elsewhere, leaving Andersen’s grave standing alone (in death as in life!). A healthier, reciprocal romantic relationship was carried out with the Hereditary Grand Duke of Weimar, Carl-Alexander von Saxe-Weimar-Eisenach, whom Andersen met in 1844.

Andersen titled his autobiography “The Fairy Tale of My Life.” There is indeed something miraculous about the transformation of a poverty-stricken, uneducated child into a world-renowned writer. In it we learn that Andersen suffered from dyslexia and agoraphobia – not to mention the fact that he was a strict vegetarian. He also feared being burned or buried alive.

When Andersen's funeral was held at the Cathedral of Our Lady in Copenhagen (August 11, 1875), a national day of mourning was declared. Throngs of people attended the funeral, including royalty and many celebrities. His fairy tales were translated into more languages than any other books except the Bible, and his stories continue to influence and inspire children and adults alike.

The Little Mermaid
Highly disturbing and morbid tale about a mermaid who makes a diabolical bargain with a sea witch and suffers her tongue to be cut out and her tail to be lost, all for the love of a prince. Inevitably, he completely fails to recognize the enormity of her sacrifice.

The Red Shoes
Vanity is the sin of the anti-heroine (vindictively named Karen after Andersen's loathed half-sister) in this nasty tale, which was made into an acclaimed film in 1948. Karen's sin of going to church in bright red shoes and failing to care for her grandmother is punished by her being forced to dance unceasingly – forever. Rest comes only when her feet are cut off with an axe. Nice!

The Ice Maiden
There is a touch of the earlier Snow Queen in this novella, a dark, tragic love story about Rudy and Babette who are stolen away by the icy Glacier Queen, a terrifying figure who represents death.

Anne Lisbeth
Spooky story telling the fate suffered by a woman who rejects her ugly son and becomes a nursemaid to the count's son instead. Retribution comes in the form of rejection by those she has served, the drowning of her own son and guilt-ridden nightmares. Don’t say I didn’t warn you.