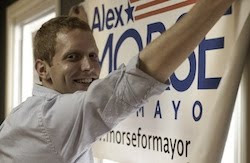 Out and gay Alex Morse (at left, photo by Rob Deza) is the newly-elected 22-year-old mayor of Holyoke, Massachusetts, but CBS did not mention his sexual orientation on their Sunday news segment on Morse. That issue simply wasn't an issue in this campaign, according to The New Civil Rights Movement, a website dedicated to gay rights topics, especially same-sex marriage.

"He is gay. He is out. He has worked for the cause. He just won a stunner of a political victory, and as hard as this is to conceptualize, being gay was not a complicating factor in his campaign," writes Jean Ann Esselink in an article titled "On Our Radar – Mayor-Elect Alex Morse" that was posted Sunday on the website.

The 2½-minute CBS news segment included some hardscrabble images of the heavily Hispanic city, where a third of residents live below the poverty line and unemployment hovers around 11 percent. Morse, who takes office in January, says he's looking forward to managing a city with a $120 million budget and nearly 40,000 residents. 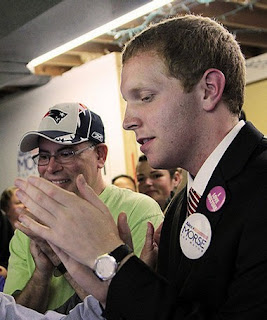 But the optimism of Morse – a recent Brown University graduate who launched a mayoral bid while still attending the Ivy League school – shines through. He played up the city's bright spots, including a high-tech office park expected to serve as a magnet for new jobs and plans to renovate the old Victory Theater.

"One of the most satisfying things to do in life is to do what others tell you you cannot do, and I think that's what we did throughout this campaign," Morse says in the CBS interview. "Never once did I listen to folks who said, 'You're too young, you haven't paid your dues.'"