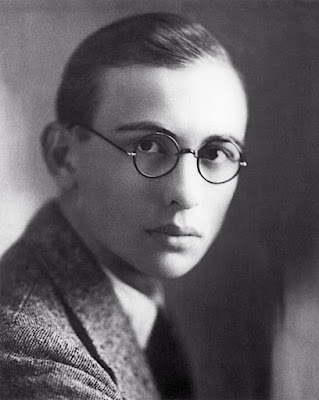 Born on a farm outside Claremore, Oklahoma, gay poet and playwright Rollie Lynn Riggs (1899-1954) had once worked as a day laborer, a movie cowboy, a reporter, a Hollywood screenwriter, a proofreader at the Wall Street Journal and a school teacher in Chicago. His father was a cattleman turned bank president, and his mother was 1/8th Cherokee. Lynn grew up during Oklahoma’s territorial days.

His first poem was published in 1919 in the Los Angeles Times, where he was working as a proof reader. Before relocating to NYC in 1926, he had worked on a chicken ranch, in a glass factory, and had sung in a Chautauqua quintet. Now he was setting his sights on Broadway.


In 1928 he went to Europe on a Guggenheim Fellowship, arriving in Paris to work on a new play. Settling in at the famed Les Deux Magots café, Lynn Riggs wrote about life on the Oklahoma Indian territory, relating the loneliness, isolation and violent emotions of life on the frontier before Oklahoma became a state. Many of the characters were based on his own family and friends. As work progressed, he relocated to a $2-a-night rented room in Cagnes-sur-Mer on the French Riviera west of Nice. He titled his play Green Grow the Lilacs, after a nineteenth-century folk song, and it became the source material for the 1943 landmark Broadway musical Oklahoma!, the first ever collaboration between Richard Rodgers and Oscar Hammerstein II.


The first production of Green Grow the Lilacs was a 1931 presentation by the Theatre Guild in NYC, and the cast included Lee Strasberg and a troupe of real cowboys from a rodeo that had just closed at Madison Square Garden. While Rodgers and Hammerstein began crafting their musical version of Riggs’s play in 1942, Lynn was drafted into the U.S. Army, serving his country at Wright Field in Dayton, Ohio. He did not know that Hammerstein was frequently lifting melodious dialogue from his play verbatim for use as lyrics for the musical’s songs.


Some of Lynn’s postwar scripts achieved success in NYC, where he lived out his days with a series of male companions. Riggs was described as a slight man with fine brown hair and gentle manners. While living in Los Angeles he became a confidant of both Betty Davis and Joan Crawford, functioning as their frequent public escort. In an affectionate gesture Crawford presented him with a Scottish terrier he named The Baron.


Riggs died in NYC of stomach cancer in 1954 at age 54, but his body was returned to his hometown of Claremore, Oklahoma, for interment. A park in Claremore is named in his honor, and a museum in the same town displays photographs that chronicle his lifetime. Also on display are artifacts from the film version of Oklahoma!, including the “Surry with the Fringe on Top” and Laurey’s honeymoon dress. 918.342.1127.


Sources:
Something Wonderful by Todd Purdum (2018)
Thomas Erhard, Oklahoma Historical Society (2009)
A Handbook of Oklahoma Writers by Mary Hays Marable and Elaine Boylan (1939)
Posted by Terry at 2:07 AM 1 comment: