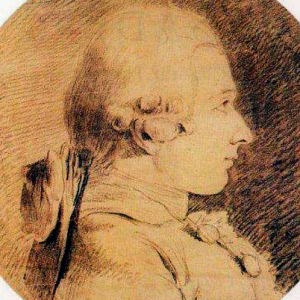 Let’s see. According to the Wikipedia page, he was born Count (not Marquis) Donatien-Alphonse-François de Sade in 1740 in Paris and died in a French mental asylum in 1814. He was a rich, bisexual pint-sized (5'2") libertine and writer (novels, plays, poems) who spent a third of his life incarcerated for indecency – and that’s a charitable assessment of his life. The engraving at left (de Sade at age 19) is the only surviving image of the Marquis.

The word “sadism” (deriving sexual pleasure from inflicting pain) is derived from his name, and he is thought to have acted out in real life most of the debauchery and perversions he wrote about. A rabid atheist, de Sade also held enlightened views on homosexuality, which he described as no more or less normal than heterosexuality. Indeed, one of de Sade’s favorite sexual acts was to be impaled by his male valet while engaging in intercourse with a female.

Where to start? Although he had a wife and three children, there was nothing respectable about him. He used these words to describe himself: “Imperious, angry, furious, extreme in all things, with a disturbance in the moral imagination unlike any the world has ever known –  there you have me in a nutshell: and one more thing, kill me or take me as I am, for I will not change.” His aristocratic family’s reputation was ruined by his depravity; his son removed “Donatien” from his name so as not to be associated with his infamous father. His other son burned his father's manuscripts upon his death in 1814. De Sade's writings, which detailed acts of rape, incest and pedophilia (for starters), were banned until 1957, and his family took extensive measures to erase the memory of their disgraced ancestor. When, as newly-weds during the 1940s, the parents of Hughes de Sade (b. 1948) explored the attic of their chateau, they discovered that a wall had been bricked up generations ago. Stored inside were papers, letters and writings by the Marquis. The couple had never heard of him and knew nothing about his reputation.

There has been a huge turnabout in recent times. The de Sade family now celebrates its link to the so-called “Marquis.” Hughes de Sade, who boldly named his now 39-year-old son “Donatien”, has created a luxury brand that capitalizes on the Marquis de Sade legacy. Offerings from the Maison de Sade include wine (one red variety is labeled “Justine”), scented candles and gourmet items, and the family is in negotiations with Victoria’s Secret to develop a line of lingerie that will pay homage to the Marquis.

Exactly two months ago – December 2, 1814 – marked the two hundredth anniversary of the death of the Marquis, and the Musée d’Orsay in Paris had an exhibition on de Sade’s influence on the visual arts titled “Sade – Attacking the Sun.” A big tourist draw at the Château de Vincennes, a short distance east of Paris, is the prison cell in which the Marquis was incarcerated. Also notable is an exhibit at the Paris Museum of Letters and Manuscripts titled “Sade: Marquis of the Shadows, Prince of the Enlightenment” that opened in late 2014.

While a prisoner at the Bastille, de Sade wrote The 120 Days of Sodom on a 6" tall, 39' long scroll, that was found hidden away in his cell when the Bastille was stormed during the Revolution of 1789. Somehow the scroll fell into the hands of a wealthy French family that sold it in 1904 to a German collector who published a limited edition of 180 copies. The scroll was returned to France in 1929, but in 1982 a descendant of the de Sade family lent it to a bookseller, who stole it and promptly sold it to a Swiss collector. In the spring of 2014, the French National Library brought the manuscript back to France for an astonishing settlement of $9.6 million dollars with the contentious French and Swiss owners. That makes The 120 Days of Sodom one of the most valuable literary works in existence, on a par with the Magna Carta and da Vinci’s Leicester Codex. All the more amazing is that the subject of this über-valuable scroll is the imprisonment, sexual torture and death of dozens of adolescent and teenaged men and women at the hands of four depraved male aristocrats.

A short English-language article about de Sade can be found at: http://www.kirjasto.sci.fi/desade.htm