Out in the office place at Eastman Kodak (Rochester) 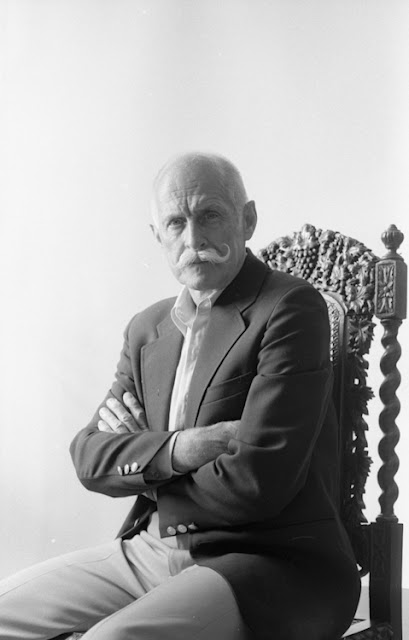 By the 1950s the Eastman Kodak Company (Rochester, NY) had a number of gay male employees who,  although not "out" by today’s standards, did not keep their sexual orientation secret. Two examples were Earl Kage (1919-2008) and his partner, Hamilton “Bud” Driggs (1925-2008), who shared a home on Lafayette Park and a 100-acre country estate in the Bristol Hills, both in the Rochester area. After their deaths in 2008, the estate was donated to the University of Rochester.

Kodak photographer and arts patron Earl Kage  (photo above) was a one man cultural institution in his native Rochester. Distinguished by his pure white handlebar moustache, he was recognized as a sponsor of opera, dance, fine arts and numerous other cultural institutions. He worked at Eastman Kodak for 44 years, from youth to retirement. In 1987 he received the Culture and Arts Civic Award from the Rochester Chamber of Commerce, and in 1989 a Lifetime Achievement Award from the Arts and Cultural Council. Kage became head of Kodak Camera Research after attending The University of Rochester and serving in the U.S. Army in England during World War II as a photographer for the Stars and Stripes newspaper.

His dedication to the arts resulted in his serving on boards of the Friends of Eastman Opera, Garth Fagan Dance Company, the Rochester City Ballet, The Aesthetic Education Institute, Friends of School of the Arts and affiliations with the George Eastman House of International Photography, Rochester Children's Theater and the Rochester Philharmonic Orchestra. He often served as a judge for many art-related shows over the years.

Hamilton “Bud” Driggs worked for Eastman Kodak for 30 years as head of Exhibits and Displays, following employment at the Atomic Labs at the University of Rochester. He assisted Kage in setting up a photographic studio in Rochester. Driggs was also a talented silversmith who won prizes for his craft work. A professional photographer, he recorded his travels to such remote spots as the Arctic Circle, Nepal and New Guinea. Both Driggs and Kage enjoyed an atmosphere of acceptance while working at Eastman Kodak.

In fact, some historians purport that George Eastman (1854-1932), the father of modern photography and founder of the Eastman Kodak Company, was himself a gay man.  In the late 19th century homosexuality was a major taboo, so Eastman never went public with his sexual orientation. However, his private correspondence of over 700 letters and general accounts of Eastman’s personal life confirm that he was not heterosexual. Eastman was a generous philanthropist, and he established and supported the Eastman School of Music, one of the nation’s preeminent institutions of music. During the 1920s, Eastman was listed as the fifth-largest individual donor in the United States, and by his death he had given away about $100 million.  His total donations to the University of Rochester totaled $50 million. Using the name "Mr. Smith," Eastman gave $20 million to the Massachusetts Institute of Technology (MIT) over many years. He also donated to several colleges for African Americans. At the onset of a nerve disorder and general failing health, Eastman took his own life with a pistol in 1932.
Posted by Terry at 6:50 PM 1 comment: