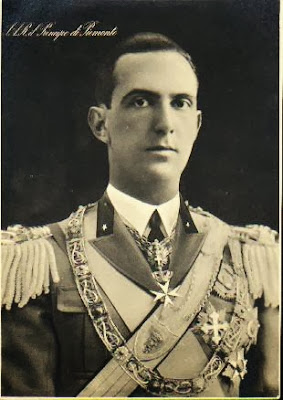 The only son of Italian King Victor Emmanuel III, King Umberto II (1904-1983) is found on many lists of the shortest-reigning monarchs in history. He was regent of Italy from May 9 to June 12, 1945. Thus known as the “May King”, he was Italy’s last king before the monarchy was abolished and the nation became a Republic. After a dubious 1945 plebiscite, Umberto of Savoy was forced into exile in Cascais, Portugal, to avoid a civil war. His family ties to Musolini did not favor his fate.

Umberto had earlier entered into an arranged marriage to a Belgian Princess, carrying out a tradition common to European royalty, but he lived apart from his wife except for public appearances. It is confirmed that he spent his wedding night and entire honeymoon apart from his wife, instead enjoying the company of male “friends” to whom Umberto gave diamond-studded fleur-de-lis shaped mementos and jewels in the shape of the letter “U” (the fleur-de-lis was the symbol of the Savoy dynasty). Those young men flaunted the gifts in public. When Umberto later called on his wife, he was always in the company of someone else and had himself formally announced. Their first child was not born until after four years of marriage, and rumors persisted that they were born by artificial insemination or were fathered by men other than Umberto. Umberto and his wife kept separate apartments, separate beds and had separate circles of friends. Hmm...

He also engaged in relations with many homosexuals of both high and low born pedigree. Many of them were oung military officers, such as Enrico Montanari, who recounted that in the city of Turin during 1927, as a lieutenant he was persistently courted by Prince Umberto. Montanari wrote that Umberto gave him a silver cigarette lighter inscribed with "Dimmi di sì!" (Say yes to me!). Further, a biography of film-director Luchino Visconti revealed explicit details about the director’s sexual relationship with the Prince. Others have come forward with evidence that Umberto’s lovers included French actor Jean Marais and boxer Primo Carnera. 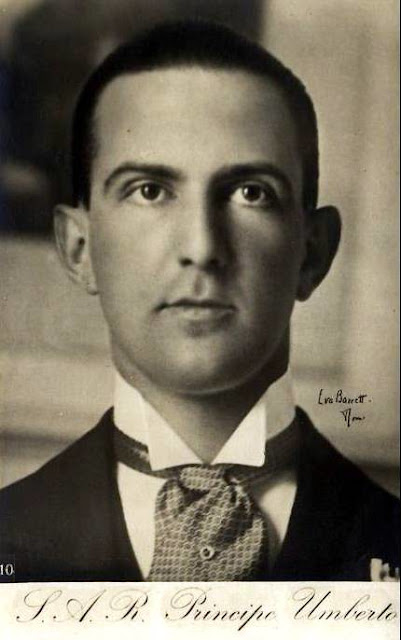 Various actresses have been forthcoming with details of how Umberto (1944 photo at right) surrounded himself with glamorous women to give the impression that he was a gallant playboy, but all of them said their relationships with Umberto were platonic, and that these “romances” were merely staged to deflect rumors of his homosexual activity.

When Umberto became ill in his late seventies, he was not allowed to return to Italy to die. His death occurred in 1983 in Geneva, Switzerland, but he was buried on French soil in the Savoy family tomb in Haute-Combe. No representative of the Italian government attended his funeral.

Source:
Giovanni Dall’Orto in “Who’s Who in Gay and Lesbian History” (Vol. I, 2001), edited by Aldrich and Wotherspoon.
Posted by Terry at 4:36 AM 4 comments: