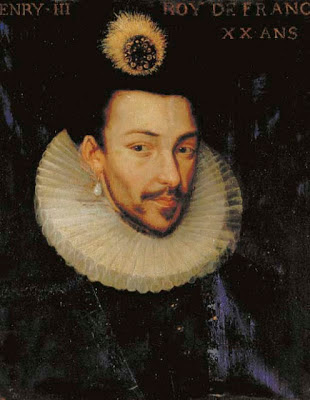 The twenty-three-year-old dandy Henryk Walezy (1551-1589) had served only two years as King of Poland and Grand Duke of Lithuania when he received news that forever changed his life. His brother Charles IX (Henryk’s bitter enemy), who happened to be king of France, had just died, leaving Henryk with a much better prospect. King of France trumped King of Poland any day of the week. Born Alexandre-Édouard de Valois-Angoulèm in the Royal Château de Fontainebleau (built by his grandfather, François I of France), the outrageously vain and effeminate Henryk took a leave of absence from Poland* to hie himself to Reims, where he was crowned Henri III, King of France, on February 13, 1575.

*The Polish population soon realized that the leave of absence was permanent, and the Polish throne was declared vacant.

The day after his coronation as the king of France, Henri participated in an arranged marriage to Louise of Lorraine, and it was expected that they would conceive a child. Never happened. Though Louise fell deeply in love with Henri, the sexual feelings were not reciprocated. Henri treated his wife as a doll, dressing her up, applying makeup to her face, teaching her how to flirt. Her mild and gentle virtues contrasted her husband’s vice, vulgarity and coarseness. Louise soon learned that her husband was a flamboyant omni-sexual given to wild sadomasochistic orgies while dressed in drag. Among the passions he was unable to restrain was an obsession for outrageous jewelry. He surrounded himself with legions of twenty-something boyfriends, favorites known as “mignons de cœur” (darlings of the heart), and they scandalized the public with their effeminate mannerisms. They also copied their king’s fashion innovations, protecting their hands by carrying small muffs, wearing outsized earrings and keeping pet parrots and monkeys. Even the king’s fondness for lapdogs – especially small spaniels – was copied by his mignons. When Henri changed the style of his beard or moustache, his mignons followed suit. I kid you not.

A real fashionista, Henri changed his garments, jewelry and perfumes several times a day. He showed little interest in typically masculine pursuits such as hunting, preferring masked balls, parlor games and the intrigues of court life and etiquette (he introduced the use of a fork to the tables of France, an item of cutlery that had been in use while he was king of Poland).

In fact, the contemporary reports of Henri’s untempered homosexual activity and effeminate mannerisms were so numerous and blatant that some historians dismiss many of them as politically motivated exaggerations. However, seldom in history had the homosexual activity of a monarch been so public and undisguised. His harem of young male mignons was not confined to the royal palaces; when the king attended public fairs and carnivals, his fawning favorites accompanied him in full force. Not only did Henri dress in women’s clothes, he did so in public.

Henri III (seated) amongst his mignons: 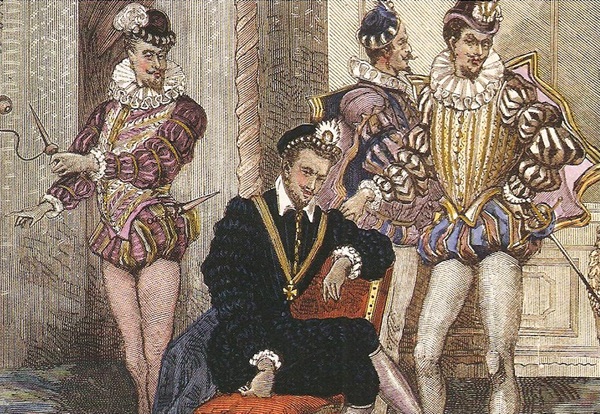 Throughout his life Henri had been controlled by his power-mad mother, Catherine of Medici, whose pet name for her son was “chers yeux” (precious eyes). She was responsible for setting him up on the throne of Poland. She had been the one to embroil her children in the hideous crimes of the St. Bartholomew Massacre of Protestants. Catherine was content to watch her son Henri occupy himself with frivolous fashion and childish games, allowing herself to control many affairs of state, marked by religious animosity between Catholics and Protestants. However, Henri’s inability to produce an heir resulted in a succession crisis.

For King Henri III, it all came to an early and ignominious end. Just shy of his thirty-eighth birthday he was assassinated by a young fanatical Dominican friar, Jacques Clément, who was carrying false papers. Clément was granted access to deliver important documents to the King. The monk gave Henri a bundle of papers and stated that he had a secret message to deliver. The King signaled for his attendants to step back for privacy, and Clément whispered in his ear while plunging a knife into his abdomen. Clément was killed on the spot by the guards, but Henri did not die until the following day. Thus Henry of Navarre, the legitimate heir to the French throne because Henri III remained childless, became his successor as Henri IV, one of the great kings of France.
Posted by Terry at 2:30 AM 10 comments: