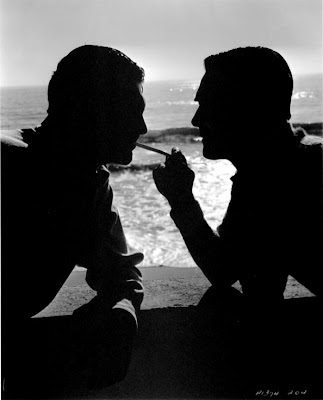 Though he married women five times, movie star Cary Grant (1904-1986) enjoyed many gay relationships during his early career in New York and Hollywood. His most famous same-sex romance was with fellow actor Randolph Scott (1898-1987), the rugged star of numerous westerns. 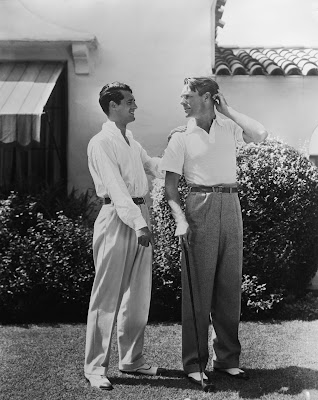 Grant and Scott met at Paramount Studios in 1932 and were immediately attracted to each other. Soon after, they moved in together, sharing a house at 2177 W. Live Oak Drive near Griffith Park in Hollywood. The arrangement was explained away by studio public relations agents as a way for two young actors to “cut costs and share expenses,” even though both men could easily afford their own homes. Even after Grant’s studio-arranged marriage to Virginia Cherrill, the two men continued to bear a torch for each other; just a few months into Grant's marriage, he attempted suicide. After a 13-month marriage, in a 1935 divorce settlement, Cherrill received $50,000, which was equivalent to 50% of their community property at the time. Grant moved back in with Scott. 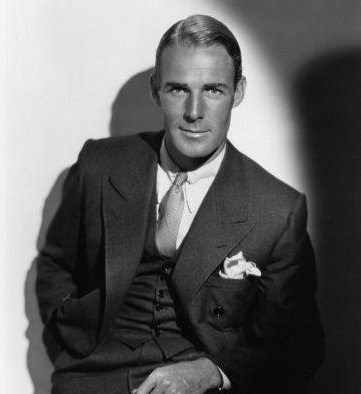 Randolph Scott (above), beyond handsome.

Between liaisons with other men and women, Grant and Scott’s relationship endured, well known to their colleagues in the industry. In the late 1930s, Grant and Scott occupied a Santa Monica beach house at 1019 Ocean Front (since renumbered – now 1039). In fan magazines, they were  photographed together in domestic bliss, wearing aprons and cavorting pool side or on the patio. According to Grant’s biographer, they believed their public openness and flamboyance would raise them above suspicion of homosexuality. The public bought it, and Grant enjoyed a screen career as a suave ladies’ man for the next three decades, while Randolph Scott made popular westerns, always playing rugged, masculine characters.

Don’t miss My Favorite Wife (1940 - available from NetFlix), a film featuring Grant and Scott as co-stars in a screwball comedy. In this trailer for the movie, Scott appears with Cary Grant at the 1:45 mark.

Grant and Scott met at Paramount while making the movie, Hot Saturday, and sparks flew on screen and off. In one scene a very tall 34-year-old Randolph Scott (Bill) dances with his fiancée (Ruth, portrayed by Nancy Carroll). 28-year-old Cary Grant (Romer) emerges from the rumble seat of his car as he arrives at the dance, and Cary Grant cuts in on Carroll and Scott, and the sexual tension between the two men is so hot that Nancy Carroll is all but superfluous. See for yourself on Netflix. 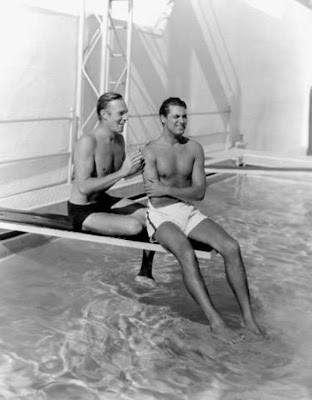 The two stars shared a Santa Monica beach house (jokingly known as Bachelor Hall) during the 1930s as well as a mansion in Los Feliz (2177 West Live Oak Drive* – the house still stands). The two cohabitated for 11 years and remained friends throughout their lives, and between them had seven marriages. Randolph Scott’s career reached its peak in the 1950s, when he was the king of Hollywood westerns. 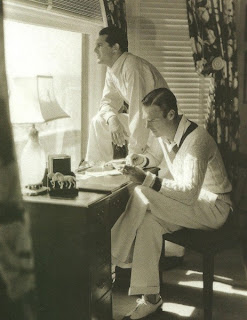 Both went on to marry heiresses. It is well known that Grant was married to Barbara Hutton. Scott was married to heiress Marion DuPont for three years, but they did not live together or have a sexual relationship. Scott remained in Los Angeles, while Marion pursued her equestrian interests at her estate in Virginia known as Montpelier. This, er 55-room mansion in Orange, Virginia, was the ancestral and retirement home built by President James Madison. Today a framed black and white photograph of Scott sits on a bookcase in the Montpelier museum annex that preserves the Art Deco interior of DuPont’s equestrian trophy room; the photo is the sole reference to their marriage. The rest of the house has been returned to its appearance as it was when President Madison lived there. Weirdly, Scott had served as best man at Marion’s first wedding. Stranger still is the fact that Scott had been born in Orange County, Virginia. Clearly fond of each other, Marion and Randolph remained close friends all their lives. 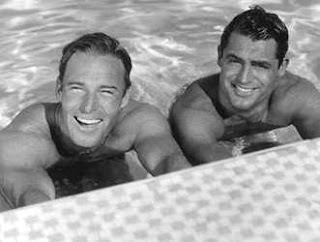 People who knew them early in their careers said Grant and Scott lived openly gay lives behind closed doors, but, as was the case with Rock Hudson, arranged marriages were the order of the day. Studios had to protect their financial properties and interests. The name "Bachelor Hall" and the reported parade of women through there were orchestrated by the studios, who wanted to keep their valuable actors away from any scandal.

Famed homosexual film director George Cukor said this about the homosexual relationship between the two: “Oh, Cary won't talk about it. At most, he'll say they did some wonderful pictures together. But Randolph will admit it – to a friend.” Chronicler of Gay Hollywood William J. Mann, in his book Behind the Screen -- How Gays and Lesbians Shaped Hollywood, relates an incident from the 1970s in which a maitre-d' at a Beverly Hills hotel saw Grant and Scott sitting in the back of the restaurant, late at night, now old and white-haired, after all the other diners had left. They were holding hands.

Nevertheless, legions of fans refuse to believe that either man ever took part in a homosexual relationship. Yet both fashion critic Richard Blackwell and glamor photographer Jerome Zerbe claimed they had affairs with both Grant and Scott; and before meeting Scott, Grant had lived with gay Hollywood costume designer John Orry-Kelly. 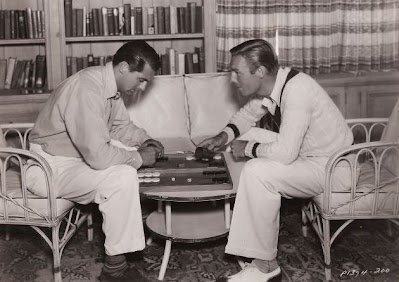 An oft-repeated swipe was: “Archie Leach (Cary Grant's birth name) was gay, but Cary Grant was straight.” He later said that ultimately, he BECAME Cary Grant, the guy up on the screen, because that’s what everyone wanted him to be.

That says it all, I think.


Photo: Cary Grant in the prime of his youth. 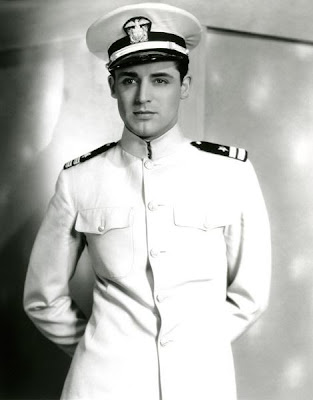 The mansion and pool shared by Cary Grant and Randolph Scott during the 1930s in the Los Feliz area of Los Angeles. The house stands to this day. 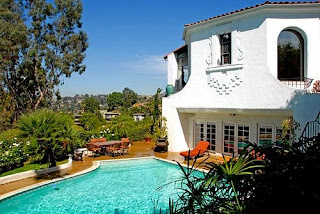 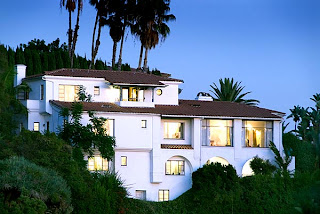