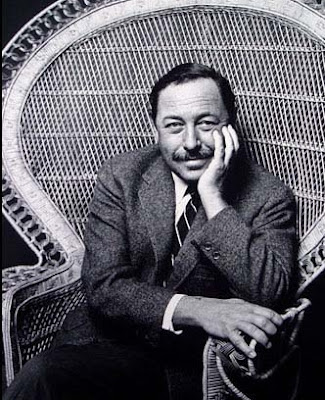 Tennessee Williams (1911-1983) was a Pulitzer Prize-winning American playwright whose works included classics such as A Glass Menagerie, A Streetcar Named Desire and Cat on a Hot Tin Roof, all made into films. A native of Missouri, his given name was Thomas Lanier Williams, later legally changed to “Tennessee,” because he spent summers there with his mother’s parents, who lived in Memphis. They had paid his college tuition.

Because his real interest while growing up was reading, rather than sports, his alcoholic father taunted him by calling him “Miss Nancy.”  Tennessee’s sister Rose was mentally ill, and her parents had a lobotomy performed on her, for which Tennessee never forgave them.

This unpleasant family situation, however, inspired strong characters in his plays. His mother was the model for Amanda Wingfield in The Glass Menagerie, and his father was the inspiration for Big Daddy in Cat on a Hot Tin Roof. After two years of college Tennessee left school because of his family’s financial setbacks and poor grades. He took a job as a shoe salesman for his father, but he hated the job and lapsed into severe depression, leading to a nervous breakdown.

At age twenty eight Williams moved to New Orleans, a city that inspired his subsequent writing, notably A Streetcar Named Desire. In 1945, The Glass Menagerie, a play he'd been working for some years, opened on Broadway to great acclaim; the New York Drama Critics’ Circle named it the best new play of the year. A Streetcar Named Desire opened two years later, and his life was forever changed. This play earned Williams his first Pulitzer Prize and another Drama Critics’ Award, establishing him as one of America’s great playwrights. These plays also introduced a signature character type, that of the faded Southern belle.

Shortly after A Streetcar Named Desire opened, Tennessee sailed for Europe to recover from the physical and emotional strain of writing and producing the play, leading to his belief that he would never write again. A long, unproductive period followed, during which the playwright took to excessive drinking, consuming huge quantities of pills and engaging in promiscuous gay sex. When he failed to show up for a gala in his honor at the London premiere of The Glass Menagerie, his mother later received a telegram from Tennessee stating that he had fallen unconscious after taking sedatives. This event served as a wake-up call, and he returned to the States a short time later.

Before Williams had left for Europe, a one-night stand in Provincetown, Massachusetts, served as an introduction to the man who would become the love of his life. Upon Tennessee’s return to NYC in 1948, while eating at a deli on Lexington Avenue he recognized Frank Merlo, a truck driver, from their tryst a year earlier. A few weeks later Merlo moved in with Williams, and the pair fell hopelessly in love. Frank cleaned the apartment, cooked all the meals, acted as chauffeur and managed correspondence. More importantly, Merlo gradually weaned Williams off dependence on alcohol, casual sex and pills. This newly stable home life allowed Tennessee Williams once again to  concentrate on writing. Frank, of Sicilian heritage, was the inspiration for the lead character in the playwright’s next creation, a play called The Rose Tattoo, which was honored at the Tony Awards as the best new play of 1951. 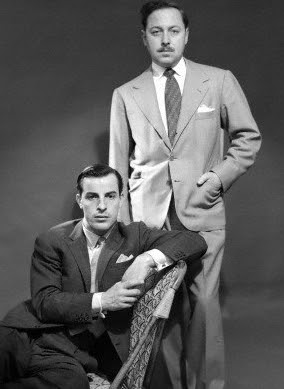 When Williams was writing Cat on a Hot Tin Roof, he was filled with anxiety and doubt, fearful that he could not match the excellence and acclaim of A Streetcar Named Desire. Merlo (seated in photo) encouraged and coddled Williams through this difficult process during 1954. The play opened to rave reviews, earning Williams his third Drama Critics’ Award and a second Pulitzer. Tennessee was so grateful for Frank’s support during the writing of that play that he gave him ten percent of the profits. While writing his next major success, The Night of the Iguana, this situation was repeated. Merlo smoothed over Tennessee’s next crisis of confidence leading up to the play’s opening in 1961. Time Magazine honored the play’s great success by placing Tennessee Williams on its cover, and the inside text dubbed Williams “America’s greatest playwright.”

The public knew nothing of Tennessee’s sexual orientation or his relationship with Frank Merlo. Although Williams never denied being gay, such things were not written about at the time. Unfortunately, cracks began to develop in their relationship. Merlo had insisted that Williams be sexually faithful to him, a near impossibility for the playwright. Also, Frank had no career outside providing domestic and professional support for Tennessee. When both men were in California during the filming of The Glass Menagerie, Tennessee forgot to introduce Frank to Jack Warner, head of Warner Brothers. Warner walked up to Merlo and asked, “And what do you do, young man?” Frank replied, “My job is to sleep with Mr. Williams.” Even worse, Williams had begun to return to alcohol and drugs on the sly. When Merlo found out about it, he felt betrayed.

Merlo had been a four-pack-a-day smoker, and by the early 1960s he had developed a hacking cough. In 1962 he was diagnosed with inoperable lung cancer and died the following year, at age forty one. Devastated, Williams relapsed into a seven-year period of depression, promiscuous sex, alcohol abuse and drug use. None of his subsequent plays matched the quality of his earlier works, and many were received with poor reviews. The downward spiral became so pronounced that in 1969 Tennessee’s brother checked him into rehab; within the first two days of treatment Williams suffered two heart attacks and three seizures. 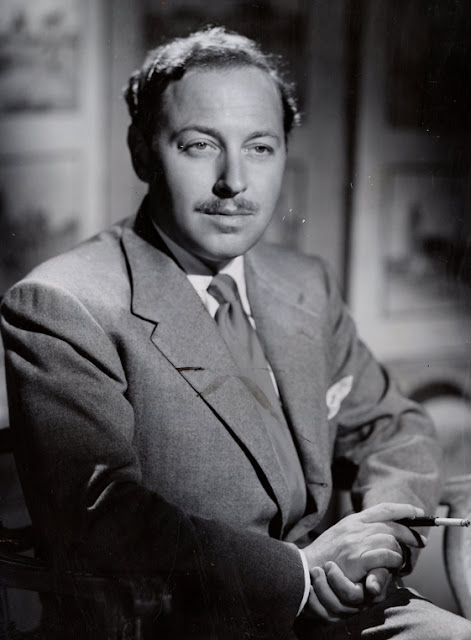 A bright spot occurred in 1979 when he received recognition by the Kennedy Center Honors. The following year President Carter bestowed upon him the Medal of Freedom. But Williams was never able to cast aside his demons. While surrounded by bottles of wine and pills, Williams died in his suite at the Elysée Hotel in New York City on February 25, 1983, the result of choking to death on the cap from a bottle of eye drops. Some researches dispute that account of his death, suggesting that a combination drug/alcohol overdose was a more likely cause. In any event, that ninth floor mid-town Manhattan hotel suite had been his home for the last fifteen years of his life. Williams was seventy one years old at the time of his death, and an obituary in the Los Angeles Times stated, “His longtime companion of 15 years, Frank Merlo, died of cancer in 1963. After that, the playwright said, 'Everything sort of fell apart'.”


Note: Astonishingly, most Internet sources for information on Tennessee Williams make no mention of Frank Merlo.