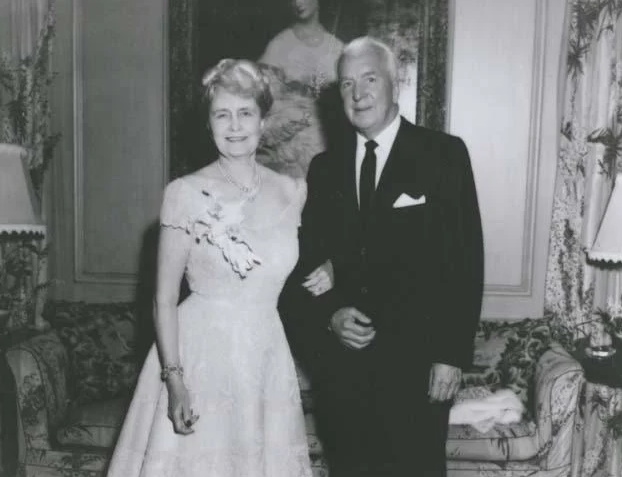 Herbert A. May (1891-1968), an executive vice president of Westinghouse, was a socialite and avid fox hunter who liked to entertain at Rosewall, his 28-room mansion in Pittsburgh. When his wife died of pneumonia in 1937, he was left to raise three young sons and an adopted daughter. In the ensuing years he enjoyed a quietly successful career in the railroad and banking industries and became a patron of the arts. May was head of the Pittsburgh Civic Opera and enthusiastically pursued his interest in ballet.

After a gap of 20 years, he married for a second time, and he rose to fame with this social upgrade. His bride was none other than Marjorie Merriweather Post (wedding photo, above), one of the richest women in the world. On June 18, 1958, the couple married at her daughter’s Maryland estate. In a reply to a congratulatory telegram from her granddaughter, Marjorie replied, “Walking on fluffy pink clouds.” The reception was held at Hillwood, Marjorie's Washington DC estate. It featured an orchestra and a ballet performance. The latter should have sounded alarm bells.

Herb was the last of her husbands – number four – and at age 67* on his wedding day, he was four years younger than Marjorie, who was vibrant, energetic, youthful looking and the undisputed queen of Washington DC society. Her philanthropy kept the capital city alive. But Mr. May kept a big secret from Marjorie. He actively engaged in homosexual activity.

Although Marjorie had been warned, she brushed it off as mere gossip. After all, Herb had been married and fathered three sons. Although she had met him thirty years earlier, she was happy to become reacquainted in 1957, two years after her acrimonious divorce from diplomat Joseph Davies. There was much to like about Herb. He was handsome and silver haired, but fit. As well, he was soft-spoken, diplomatic, charming, well-liked and kind.  He loved parties and loved to dance, and he had mastered the art of blowing through money. Herb had told his children not to expect any inheritance.

Before the wedding, Marjorie’s daughter had been told that Herb was homosexual, and some of Marjorie’s friends repeated tales about Herb’s attachment to a certain male dancer from the Washington National Ballet and one of his handsome male personal secretaries. Incredibly, Herb brought this secretary along on their honeymoon (!). Still, none of this deterred Marjorie. She was at the peak of her power in Washington, and Herb shared so many of her interests, while serving as a partner for entertaining in carrying out her various duties associated with her numerous charities.

Mr. May was the poorest of Marjorie’s four husbands (the second  had been E. F. Hutton), so she set up a trust fund for Herb. She was attracted to his intelligence, patronage of the arts, success in business, etc., but she was really won over by his warmth, enjoyment of people and his obvious pleasure in her company. They were both tall, thin, elegant and handsome people who looked for all the world like a king and queen.

But Herb did not want to abandon his home and family in Pittsburgh, and Marjorie did not want to leave Washington, where she exerted major influence. They compromised by agreeing to commute between the two cities, and Marjorie retired from the board of General Foods, the primary source of her fortune. This gave her time for concentrating on ramping up the cultural scene in Washington, which she thought to be woefully inadequate for a capital city. She installed her husband as chairman of the board of the National Ballet, from which Herb was soon selecting individual male dancers for special interest and attention.

However, Herb soon did Marjorie a huge favor by helping her overcome her fear of flying. She had been commuting to Pittsburgh by train, but for one trip Herb arranged for one of his company planes, a Lockheed Lodestar, to transport Marjorie to Pittsburgh. The flight was ultra smooth, and the weather was calm. A half hour into the trip she told her husband that she was enjoying the flight, then a few minutes later said to him, “Herb, I want one.” He explained that a plane like that cost several million dollars, plus a crew and maintenance. She replied, “I didn’t ask how much it costs. I want one.” Shortly thereafter she purchased a British-made Vickers Viscount turbo-jet (above) powered by four Rolls-Royce turboprop engines, capable of accommodating 44 passengers. Herb suggested the name "Merriweather", his wife’s middle name.

She was best pleased. Of course, she ripped out all those economy class seats and refurnished the interior as a living room, with sofas, chairs and tables. Instantly, this became her favorite mode of transportation. She began using “Merriweather” to transport all her friends to and from her estates in Palm Beach and the Adirondacks. 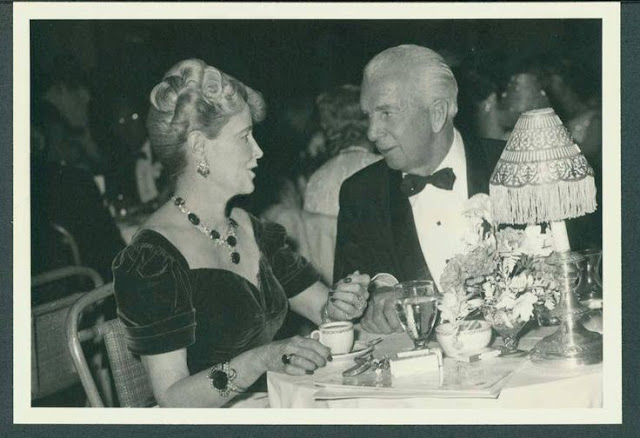 In a short time, however, cracks began to develop in their dream world of connubial bliss. Herb grew to resent Marjorie’s restrictions on alcohol, and he complained about it. She was known to be notoriously stingy with cocktails and wine at her parties, which were otherwise lavish beyond description. To the amazement of her guests, she subsequently extended the cocktail hour to a full thirty minutes and began stocking guest rooms at her retreats in Florida and New York with liquor. As a life-long Christian Scientist, her personal limitation of alcohol consumption remained a steadfast personal practice, but she was eager to please Herb.

Marjorie also included Herb’s four children in stays at Mar-a-Lago (Palm Beach, Florida) and Top Ridge (the Adirondacks in New York). Mar-a-Lago, the spectacular winter social haven, had been shuttered since Marjorie’s divorce from Joseph Davies in 1955, but Herb talked her into reopening it in 1961. Marjorie was thrilled once more to be at the top of the heap of Palm Beach society. However, it was there at Mar-a-Lago (below) that Herb was to meet his downfall. 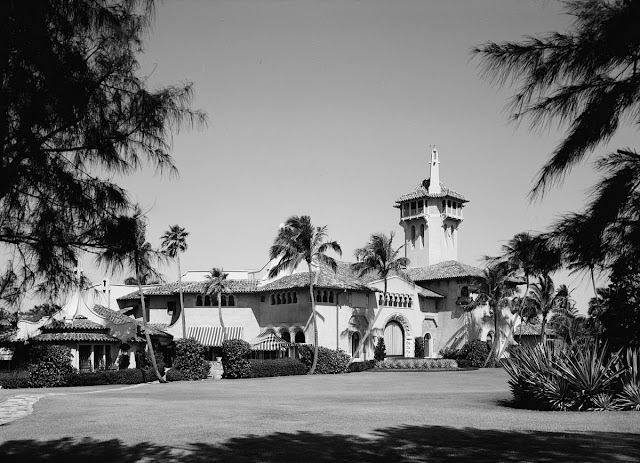 Mar-a-Lago is now owned by Donald Trump, who runs it as a very profitable membership club.

Herb was well aware that, by being married to Marjorie, he had become one of the most powerful men in Washington. But trouble was brewing. In spite of her age, Marjorie had a voracious sexual appetite. Herb was complaining to friends that he was astonished that a woman in her seventies desired daily sex. Also, by the 1960s Margaret Voigt, Marjorie’s social secretary who ran all of her social affairs, had become Marjorie’s most powerful staff member. Herb and Marjorie’s children voiced concerns that Margaret had become too influential as the social gatekeeper for access to the heiress. Margaret even ate at Marjorie’s table. When Herb made the mistake of criticizing Margaret’s inefficient office practices, a resentful standoff ensued. Shortly thereafter, a set of photographs arrived on Marjorie’s desk. They showed graphic evidence that Herb was a practicing homosexual.

The pictures showed Herb naked as he cavorted with much younger men and boys around the oceanfront pool of Mar-a-Lago. Next a blackmail attempt was made, with threats to publish the incriminating photographs unless hush money was paid. Marjorie was astonished and equally surprised that her daughter, actress Dina Merrill, knew about Herb’s proclivities before the marriage had taken place. Nevertheless, friends and family knew that until that moment, Herb and Marjorie had enjoyed a warm, romantic and sexual relationship.

With irrefutable evidence presented to her, Marjorie decided that divorce was the only option. By 1964, it was a done deal. Their marriage had lasted a scant six years, and Marjorie was relieved to have the embarrassing incident behind her.

She was not vengeful, however. When Herb suffered a stroke after the divorce, Marjorie paid all the medical bills and provided an apartment in Fort Lauderdale, where Herb lived until his death in 1968*. And she continued to be in contact with Herb’s children, particularly Peggy, who had formed an especially close relationship during the marriage. Marjorie’s loyalty to Herb’s children was mutual, and they knew they were fortunate to be allowed to maintain a relationship with a great lady. Marjorie died in 1973, at age eighty-six.

*Note:
The New York Times obituary, published on March 13, 1966, offered facts that clash with those stated in Rubin’s book. According to the Times, Mr. May died at a hospital on St. Thomas at age 71. He had suffered a stroke while on a cruise. If he had been 71 years old in 1966 (the year of his death), he would have been born in 1895, making him eight years younger than Marjorie, who was born in 1887. Yet Rubin declares that May was four years younger than his wife – 67 years old to Marjorie’s 71 years on the day of their marriage. She also stated that he died in 1968, whereas the NYT obituary was published on March, 13, 1966. Typos, perhaps, but disturbing that editors did not reconcile these disparities.