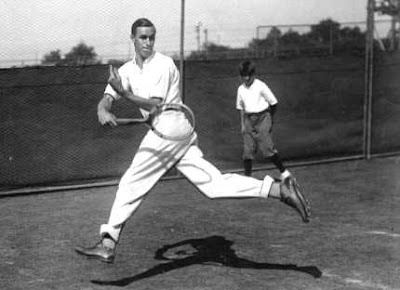 In 1920 Bill Tilden, who made no effort to hide his homosexuality, won the men’s singles title at Wimbledon. He was the first American to compete at Wimbledon and went on to win two more Wimbledon titles, in addition to seven U.S. championships. As well, he led U.S. teams to seven Davis Cup victories. From 1920 to 1934, Tilden was generally considered the world's greatest tennis player. In 1925, Tilden won an astonishing 57 matches in a row. Although Tilden lost part of his finger in an accident in 1922, he simply modified his grip and continued to play at the same level as before the injury. He won the moniker “Big Bill Tilden,” since he was tall and had a vast reach. His extraordinary serve was so powerful it was often compared to a cannonball.

A 1950 survey of sportswriters named Tilden the greatest tennis player of the half-century. Historically he is generally considered above the caliber of later champions such as Björn Borg, Pete Sampras and Roger Federer.

There was also an aura of scandal around Tilden, because of his sexual orientation. In Vladimir Nabokov’s novel “Lolita,’ Tilden is depicted as a has-been tennis champion with “a harem of ball boys,” whom Humbert Humbert hires to coach Lolita, knowing that the coach will not try to seduce her, due to his homosexuality. Nabokov told editor Alfred Appel that the novel’s anonymous tennis coach was actually a real person who had won three Wimbledon championships, was born in 1893, and died in 1953. Tilden is the only person who fits this description. The name of Nabokov's character is "Ned Litam", which is “Ma Tilden” spelled backwards.

Tilden incurred two scandalous arrests for sexual misbehavior with teenage boys in the late 1940s, and his career suffered because of it. He began traveling with hand-picked teenaged ball boys, and many clubs would not allow him on the courts. However, in 1945 Tilden and long-time doubles partner Vinnie Richards won the professional doubles championship; Tilden was 52 years old at the time. 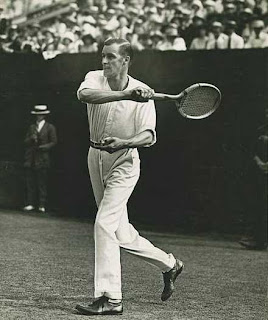 Tilden was a devout believer in sportsmanship above all other aspects of the game, including the final score; he would readily (and dramatically) cede points to his opponent if he thought the umpire had miscalled a shot in Tilden's favor. He still remains the only known professional tennis player (perhaps the only professional at any sport) to have refunded money to a promoter when the gate was not as good as it should have been and it appeared the promoter was going to lose money.

He fashioned himself a master of genres outside the world of sports, never to successful ends. He wrote short stories and novels about misunderstood but sportsman-like tennis players, and dreamed of being a star on Broadway and in Hollywood. He appeared on stage as well as off, as a producer. Much of his vast earnings were invested in these pursuits, with failure the invariable result. He was also a contract bridge champ, musicologist and playwright. He was once quoted as saying. "If I had to choose between music and tennis, I'd choose music."

In 1953 he was preparing to leave Los Angeles for the U.S. Professional Championship tournament in Cleveland, Ohio, when he died of a stroke at age 60. He was buried at Ivy Hill Cemetery in his home town of Philadelphia, where he had been born into wealth and privilege. At the time of his death Tilden was living in a rented apartment in Hollywood with $288 in the bank, a tragic end to a great life. Tilden was inducted into the International Tennis Hall of Fame in Newport, Rhode Island, in 1959.

In 2004, a play titled “Big Bill,” based on the life of Bill Tilden, played at Lincoln Center in NYC. The playwright was acclaimed dramatist A. R. Gurney. Frank Deford's biography, "Big Bill Tilden: the Triumphs and the Tragedy" has been optioned for a film.

Fashion note: During the early part of the 20th century male tennis players dressed virtually indistinguishably from cricket players. Men wore cuffed white flannel trousers and white shirts, sometimes with v-neck or cable-knit sweaters to add an element of style. Bill Tilden is generally regarded as having been the first male tennis fashion icon, transforming the image of men’s tennis from a sport played by wealthy, leisured young men unable to handle the physical demands of team sports, into a man’s game played by the toughest athletes. Tilden’s enormous fame led many to emulate his style of dress, which included long shirts rolled up to the elbows, cuffed trousers and a selection of elegant sweaters.
Posted by Terry at 12:43 AM 4 comments: