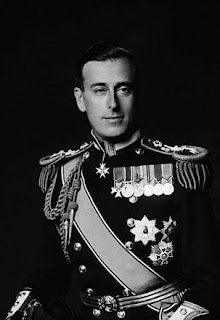 Lord Louis Mountbatten (1900-1979) was born Seine Durchlaucht Prinz Ludwig von Battenberg (His Serene Highness Prince Louis of Battenberg), but his German titles and name were dropped during WW I, when his family changed its surname from Battenberg to Mountbatten in an effort to distance themselves from their German heritage*. He was assassinated in 1979 while on holiday at his summer home in Ireland, when the Provisional IRA planted a bomb in his fishing boat. 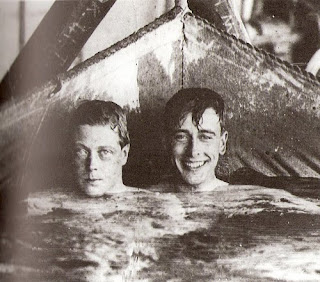 Edward Prince of Wales and his cousin Lord Louis Mountbatten “relax” in a canvas swimming pool on board H. M. S. Renown during their 1920 Empire Tour.

Lord Louis was a great grandson of Queen Victoria and the uncle of Prince Philip (consort of Queen Elizabeth II). Mountbatten was also a promiscuous bisexual who was famously rumored to have had an affair with Edward VIII (who was Prince of Wales at the time) when he accompanied him on his Empire tours (see photo above). Another “close friend” was an Irish student whom he met at Cambridge – James Jeremiah Victor Fitzwilliam Murphy - who was known by the name of Peter Murphy, a leading Cambridge homosexual with strong left wing leanings. He became Mountbatten's close and constant companion, and Mountbatten supported him with an annual allowance of 600 pounds until Murphy's death in 1966. The well-known homosexual Noel Coward was also included among Lord Louis’s close circle of friends. 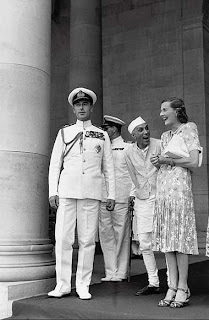 Although Lord Louis married Edwina, a fabulously wealthy socialite, he cut a wide swath through both high and low born men and women. As Mountbatten himself once put it, “Edwina and I spent all our married lives getting into other people's beds.” His wife was to have a torrid affair while in India with Panditji Nehru, Prime Minister of India, so it appears a merry old time was had by all. Edwina, Nehru and Mountbatten (photo at right) were fully engaged in a classic love triangle, but it is generally acknowledged that Nehru was the love of Edwina’s life. All three of them were known by insiders as having bisexual proclivities. Mountbatten said they were a "happy little threesome." As for Mountbatten and Edwina, they fought most of the time and lived apart for much of their lives.

Between affairs Lord Louis became Admiral of the Fleet (British Royal Navy), the last Viceroy of India, the Earl Mountbatten of Burma and the first Governor-General of an independent India. A former favorite of Winston Churchill, after 1948 Churchill never spoke to him again over Mountbatten’s role in the independence of Pakistan and India. On August 15, 1947, on Mauntbatten's watch, Britain relinquished its Indian Empire. Churchill’s infamous bigoted quote about Indians: “They are a beastly people with a beastly religion.” As Supreme Allied Commander for Southeast Asia during WW II, Mountbatten's war service culminated in the recapture of Burma from the Japanese.

Mountbatten forged a close bond with his grand nephew Prince Charles, the Prince of Wales, who was deeply affected by his murder in 1979. Mountbatten had a strong influence on Prince Charles, who declared that things would never be the same after the loss of his mentor. Lord Louis was known as “Dickie” to family and close friends, which was unusual, considering that Richard was not among his given names. Oh, I nearly forgot. "Dickie" was widely known in the military as "Mountbottom." I'm not making this up.

Mountbatten’s indiscretions paled in comparison to his elder brother George, who inherited the title Marquis of Milford Haven on the death of their father. George was also a promiscuous bisexual who was married to another bisexual: Nadeja, Countess of Torby, who was a niece of Czar Nicholas II.

George Mountbatten's claim to infamy was his vast collection of pornography, which he lavished money on, lovingly binding it into volumes emblazoned with the family crest. Some of the pornography consisted of photos of aristocrats having intercourse with their servants, but far more disturbing were the pictures of family orgies in which children were involved in active sexual participation and bestiality. On George's death the collection was inherited by his son, so part of it is it still in the hands of the Mountbatten descendants, although the bulk of it was donated to the British Museum. Don't expect to see it on display.

*When WWI bred increasing anti-German sentiment in Britain, astute observers noted that the Kaiser was Queen Victoria’s grandson and King George V’s first cousin. In recognition of the delicacy of the position, George V changed the name of his royal house from Saxe-Coburg-Gotha to Windsor, after the castle. At the same time, he also took the modern step of adopting Windsor as a surname for his family.

The Mountbattens -- Their Lives and Loves by Andrew Lownie (2019)