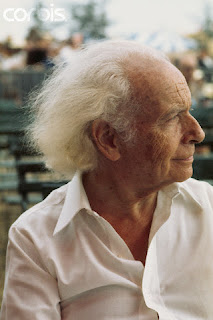 Born in Paris in 1897, bisexual poet, essayist and novelist Louis Aragon was a nineteenth century man who served France in two world wars, yet lived long enough to ride in gay pride parades in a pink convertible during the 1970s. After the death of his wife in 1970, he lived openly as a homosexual with poet Michel Larivière, who became his lover and companion, thus affirming Aragon’s bisexuality. He died in Paris in 1982, at age 85, with writer Jean Ristat at his side. Ristat is Louis Aragon's literary executor and heir.

Aragon was raised by his unmarried mother and maternal grandmother, who told him they were his sister and foster mother. Aragon's father, senator Louis Andrieux, was decades older than his mother and married to someone else. Only at age 19, as he was about to leave as a soldier in World War I (see photo below of Aragon in his uniform), was he told the truth, and the fact that Andrieux would never recognize his son would later influence Aragon's writing. 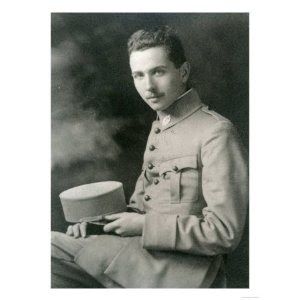 Involved with Dadaism from 1919 to 1924, Aragon became a founding member of Surrealism in 1924, writing with André Breton and Philippe Soupault. During that same period he joined the French Communist Party, and from 1933 he wrote for the party's newspaper, L'Humanité. He would remain a party member for the rest of his life, although he remained critical of the USSR, particularly after Khrushchev faulted Joseph Stalin's "personality cult" in the 20th Congress of Writers for the Defense of Culture (1956). As a noted communist intellectual he continued to support dissidents and was a vocal supporter of the Budapest insurrection of 1956. He condemned the regime of Tito and Soviet authoritarianism.

In 1939 Aragon married Russian author Elsa Triolet. Together they collaborated in the left-wing French media, going underground for most of the Nazi occupation. The year he was married Aragon was mobilized and awarded the military medal “Croix de guerre” for his bravery. After the May 1940 defeat, the couple joined the Resistance, and Aragon became the leading poet of the French Resistance movement.

During the World War II Aragon wrote for the underground Les Éditions de Minuit, working with Elsa to set up a National Front of Writers in the South. Much of his writing during this period related to the war and the heroism he witnessed. Jean Ristat has stated that from about this time Elsa knew about Aragon’s penchant for young men, but that Aragon did not flaunt his homosexual interests publicly until after her death.

Throughout his life Aragon continued to be politically involved. He produced a remarkable series of experimental fiction, poems and essays; most are available in English translation. In 1991 Aragon was honored with a commemorate postage stamp, as one of the five “French Poets of the 20th Century” series.

Aragon circa 1925, photographed by Man Ray 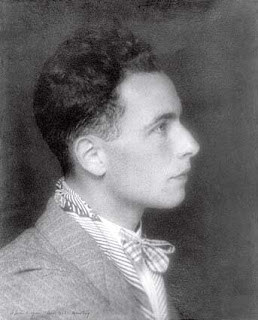