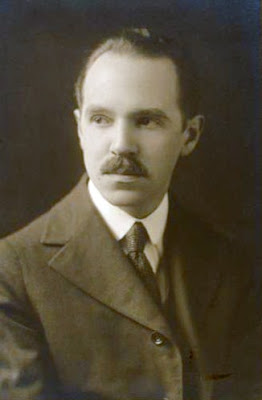 We know that the young musician from Elmira, NY, had a thing for men in uniform, because he wrote about it in his meticulously kept diaries. Subsequent studies abroad opened his mind to the emerging European homophile movement of Edward Carpenter, Magnus Hirschfeld, Oscar Wilde and André Gide, and he began to feel more comfortable with his sexual orientation. Nevertheless, once he returned to the United States in 1907 to take a job as a teacher at the Hackley School for Boys* in Tarrytown, NY, he became more circumspect and lived out the remainder of his short life as a closeted man. His departure from Europe was necessitated by the death of his father, leaving the young Griffes to support his widowed mother and other family members.

A brilliant concert pianist and composer, Charles Griffes (1884-1920, pronounced GRIFF-ess), was one of the first American composers to adapt avant-guard influences that were championed by Debussy and other Europeans. Called an "American Impressionist" by critics who didn't know how else to categorize him, he wrote highly listenable and sophisticated classical music that received praise from critics and composers, most notably Stokowski, Busoni, Pierre Monteux  and Prokofiev. His symphonic works received performances by the prestigious New York Philharmonic and Boston Symphony orchestras.

His home-town music teacher financially supported his flight from Elmira to study piano and composition in Berlin, Germany, while Griffes was still in his late teens. During his time in Europe he had affairs with several men, most notably Emil Joel, an older fellow student. Over a period of four years Joel guided Griffes’ artistic development, procured concert tickets and introduced him to such prominent musical figures as Richard Strauss, Enrico Caruso, Ferrucio Busoni, and Engelbert Humperdinck, with whom Griffes studied music. Joel even supported Griffes financially, enabling him to extend his time in Europe by a year.

As comfortable as he became among his peers in gay circles, Griffes never divulged his orientation to straight friends or associates. There was too much at stake for a man who had to support himself, especially when the job he held until his untimely death was at a boys’ school. Griffes was in a precarious position when he became infatuated with one of his male students, because no man of his time and position could have been openly gay without public disgrace. Nevertheless, he was constantly frustrated that gay men could not meet openly in public. 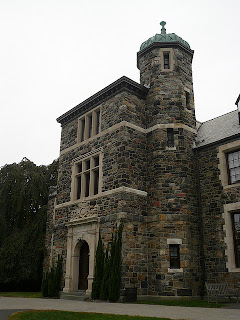 *The Hackley School (shown at right) is a private, exclusive all-male prep school in Tarrytown, NY. Internationally renowned gay architect Philip Johnson was a 1923 graduate just three years after Griffes's death. Most of the students go on to attend Harvard University.


However, Griffes was able to sneak away from Tarrytown to sample the gay life of NYC. He was known to patronize the Lafayette Place and Produce Exchange bath houses, for reasons that were obvious. He even entered into an intimate relationship with Officer John Meyer, a married New York policeman (remember that fetish for men in uniform).

Griffes composed song cycles, piano pieces, orchestral works and chamber music, much of the latter written as incidental music for stage plays. It is astonishing that he was able to do this while holding down a full-time job on the faculty of the Hackley School*. He composed, performed, arranged, revised and orchestrated everything, acted as his own agent and overcame difficulties with his publisher (G. Schirmer), all without outside assistance. Unable to afford editors or copyists, he had to correct proofs and prepare copies of his own large orchestral scores against the mounting deadlines that came with his enhanced reputation.

Note: adjust your speakers, because this performance of The Pleasure Dome of Kubla Khan starts very softly and slowly:


Tragically, at the height of his fame, Griffes contracted influenza in 1919. Shortly after a Carnegie Hall performance of his music, he collapsed at the Hackley School for Boys in early December and was subsequently hospitalized. He died on April 20, 1920, only 35 years old, and his funeral was held in New York City. Musicologist B. Collins relates a poignant tale about the funeral service, held at the Church of the Messiah at Park Avenue and 34th Street. Unexpectedly, the strains of a Bach chorale wafted from across the street, where a music festival was being held in the 71st Regiment armory.  Standing on the parapets of the armory building, a choir of trombonists played a sort of “accidental” requiem. Both the sight and sound of the performance would have pleased Griffes, as all of the trombonists were in uniform. The building that replaced that church is a structure that now hosts rehearsals of the New York City Gay Men's Chorus.

Griffes had kept a diary in German in which he reported on his various forays to bathhouses and other favorite gay-friendly haunts. Unfortunately, several of the diaries were destroyed by his sister after his death to prevent widespread knowledge of Griffes's gay recreational New York City life, his attraction to men in uniform, and his long-term relationship with a married policeman. At the time of his death he was working on a festival drama based on the poetry of Walt Whitman.

Sources: Most of the information in this post comes from biographical studies by Howard Pollack, B. Collins and Thomas Riis.
Posted by Terry at 1:01 AM