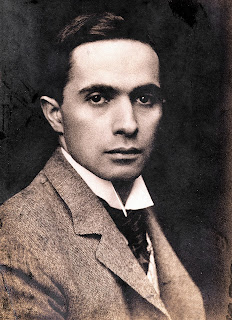 At the turn of the twentieth century Joseph Christian Leyendecker was the most in vogue American illustrator of his day. J.C. Leyendecker (pronounced LION-decker) was born in 1874 in Montabour, Germany, a town NW of Frankfurt, not far from Koblenz. His family moved to America in 1882, seeking a better life in Chicago, where Joe studied at the famed Art Institute. Both Joe and his younger brother Frank were gay, and when Joe won a contest to design a cover for Century magazine, he earned a good deal of money when his prize-winning entry was issued as an art print. He was soon able to quit working at an engraving firm and took Frank with him to Paris, where they both enrolled at the prestigious Académie Julian art school.

After their return to the U.S., Joe and Frank relocated to NYC in 1900 to better their chances at winning commissions. Working as a team, they produced oil paintings as illustrations for magazines and books. Although Joe was clearly the more talented of the two, it was Frank who was responsible for hiring the model Charles Beach, an act that forged a union between Joe and Charles that lasted fifty years.

Beach, twelve years Joe’s junior, left his native Canada for NYC at age 16 to pursue a theatrical career, for which he soon discovered he had no talent. His greatest asset was his appearance, as he was extraordinarily handsome, tall and possessed of an exceptional physique. He was also confident and charming. Charles wisely decided to abandon the stage to seek jobs as a model. He was 17 years old when Frank Leyendecker hired him in 1901. 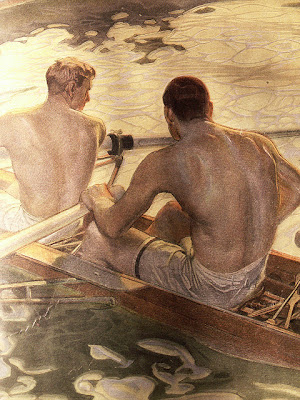 Joe, who was painfully shy and given to stuttering when asked to speak, was a real contrast to Charles. Joe was short, nondescript and socially reticent, but at first glance he was head over heels for Charles Beach. Charles soon rented an apartment just a few blocks from the Leyendecker’s studio, and most nights Joe stayed at Beach’s dwelling. The tantalizing illustrations Joe produced using Charles as a model jump started Joe’s career. Before long Charles started managing business details for the Leyendecker brothers, negotiating ever higher prices for their magazine illustration commissions. Beach prodded Joe into approaching the Saturday Evening Post magazine about creating themed covers for national holidays, resulting in a contract that kept Joe busy for decades.

Many of these covers featured men fashioned after Beach’s Adonis-like face and physique. Each time one of these covers appeared, the magazine’s circulation increased, and by 1913 the Saturday Evening Post became the most popular magazine in the world. These covers, wildly popular with the public, also made Joe Leyendecker rich and famous. He was soon earning $50,000 a year – over a million dollars when adjusted for inflation. The magazine’s  May 30, 1914, Mother's Day cover single-handedly birthed the flower delivery industry, thus creating an American tradition.

Leyendecker also introduced what is perhaps our most enduring New Year’s symbol, that of the New Year’s Baby. For almost forty years, the Saturday Evening Post featured a Leyendecker Baby on its New Year’s covers. 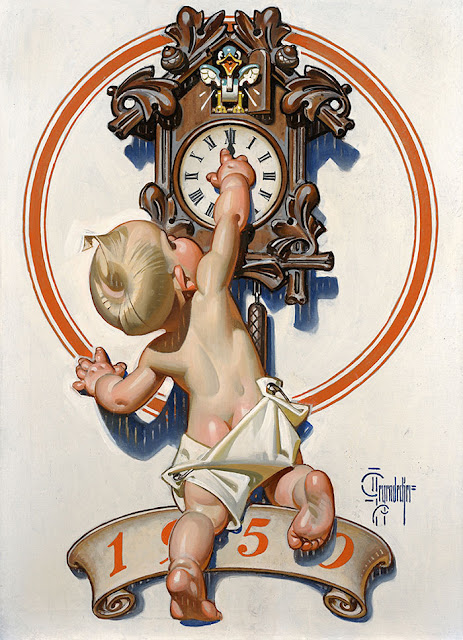 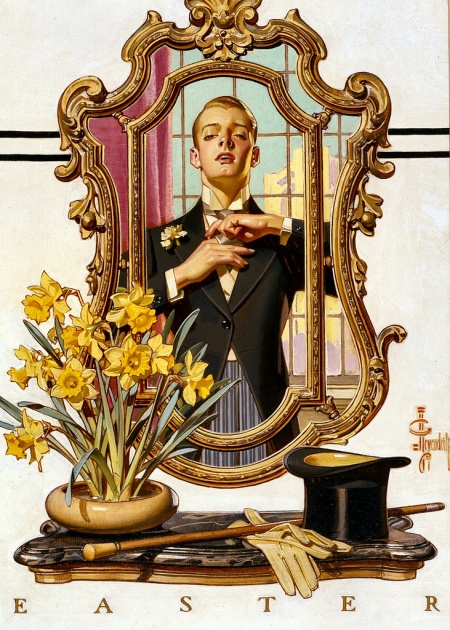 Against his brother Frank’s opposition, Joe had been persuaded by Charles to provide illustrations for advertisements. His work for men’s clothing companies was blatantly homoerotic, but it made Leyendecker’s name a household word. The success of Joe and Charles as a team culminated in 25 years of illustrations for Arrow shirt collars, for which Charles was invariably the model. The “Arrow Collar Man” was soon the symbol of fashionable American manhood – the male equivalent of the Gibson girl. These Arrow shirt collar ads created a sensation. In the early 1920s the Arrow Collar Man drew 17,000 fan letters a month, along with gifts and marriage proposals. By 1918 Arrow collar sales topped $32 million. 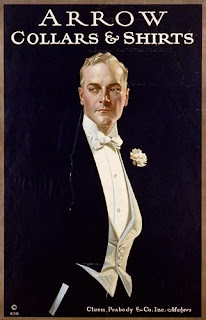 The image of Charles Beach was so universally known that strangers stopped him on the street. Both Charles and Joe took pains, however, to keep their personal union out of the public eye, since exposure as homosexuals would have ruined both their careers. In 1914 Joe designed and had built a 14 room house in suburban New Rochelle, where Joe (J.C. as intimate friends called him), brother Frank and sister Augusta all co-habitated. Frank and Joe maintained studios in separate wings of the house. Upon the death of Joe’s father in 1916 Charles moved in, as well. The household entertained extravagantly, hosting high-profile A-list guests such as Walter Chrysler and Reggie Vanderbilt. Joe and Charles inaugurated a networking strategy of mixing business with pleasure, using social contacts to procure business. Gossip columnist Walter Winchell reported on these parties, but never mentioned the private relationship between the two men. Journalists refrained for fear that they would no longer be invited to those most-coveted social events.

In 1923 brothers Frank and Joe had a falling out, and Frank’s life lapsed into a downward spiral. Unable to secure commissions on his own and unable to find a male partner, he succumbed to abuses of drugs and alcohol. Frank died of a drug overdose in 1924, reported by many as a suicide.

Joe’s popularity and productivity reached its peak in the 1930s. Although Norman Rockwell blatantly copied Leyendecker's style and subject matter, Joe was undaunted. By that time his work had appeared on more than 300 covers of the Saturday Evening Post. However, commercial photography was rapidly becoming the go-to medium for print advertising, and Joe's commissions began to dry up. About the same time, during the 1940s, Joe began to feel the ill-effects of  heart disease. While sitting in his garden in New Rochelle in 1951, he suffered a heart attack in the presence of Charles and died in his lover’s arms. Soon thereafter Charles destroyed all correspondence between them, as requested by Joe, in order to conceal their private relationship from future scrutiny. Charles had inherited half of Joe's estate but had to sell many of Leyendecker's original canvases in order to support himself. Tragically, Charles died in 1954, just three years after Joe’s demise.

Today an original Leyendecker oil painting will cost a collector dearly. In 2018, against a pre-auction estimate of $70,000, Leyendecker's oil The Oarsman was sold for $275,000. The model, of course, was Charles Beach. Photo below: 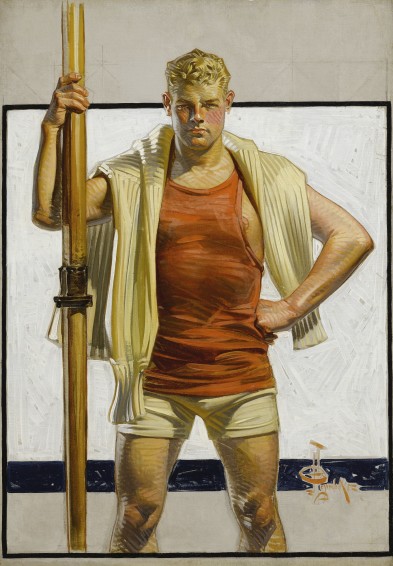 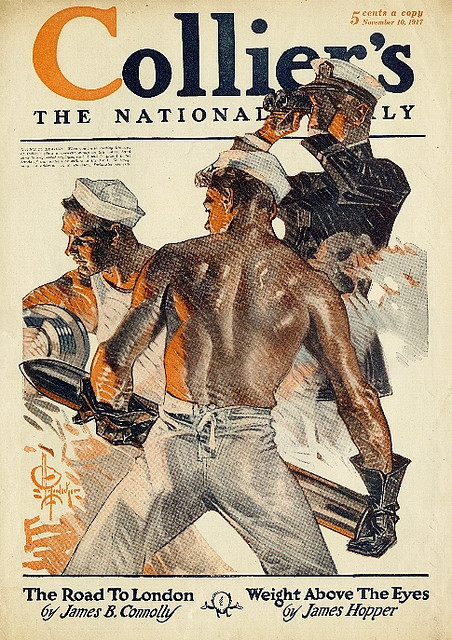 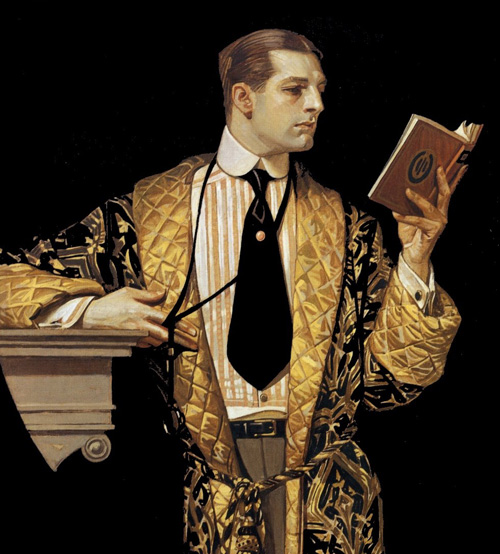 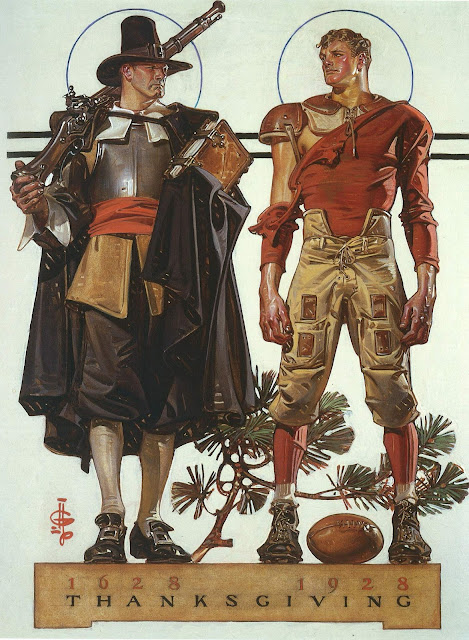 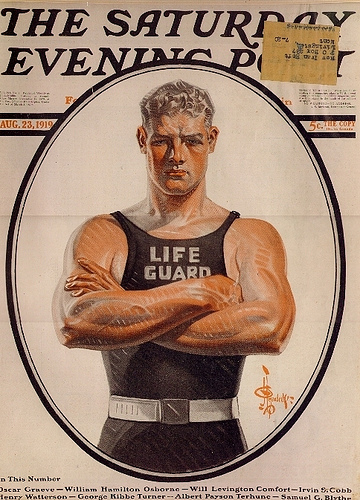 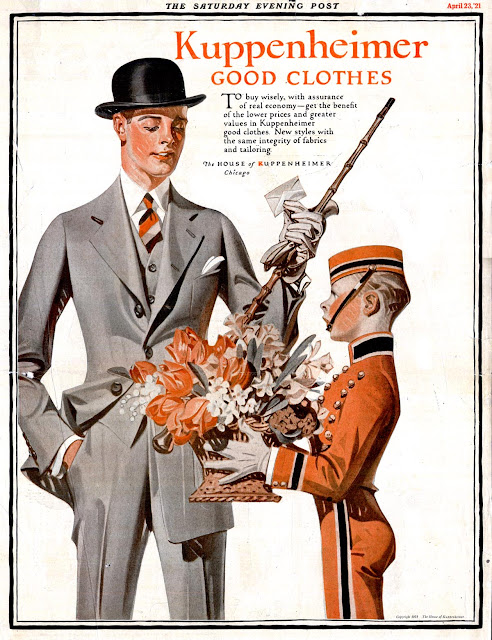 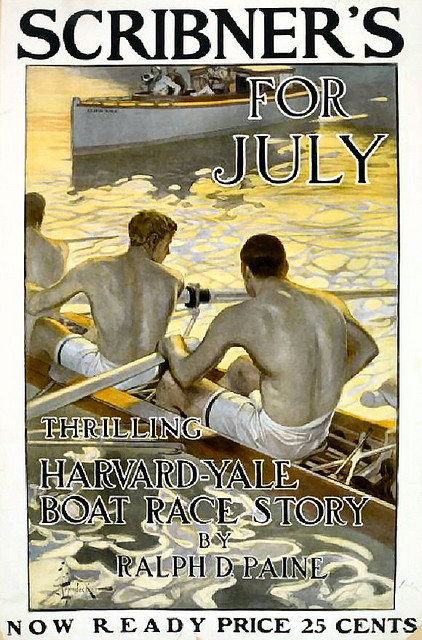 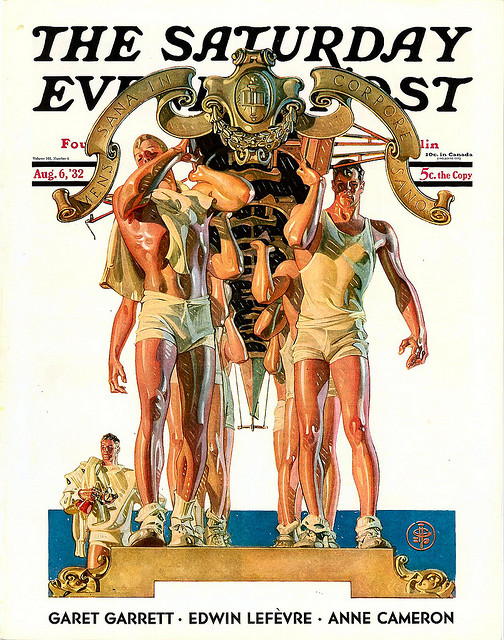 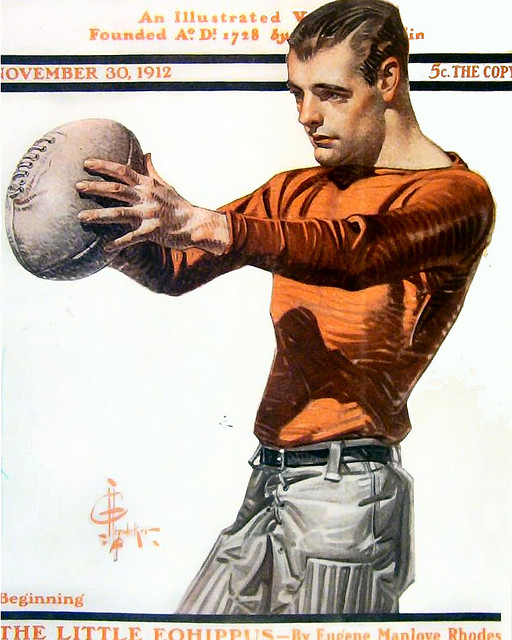 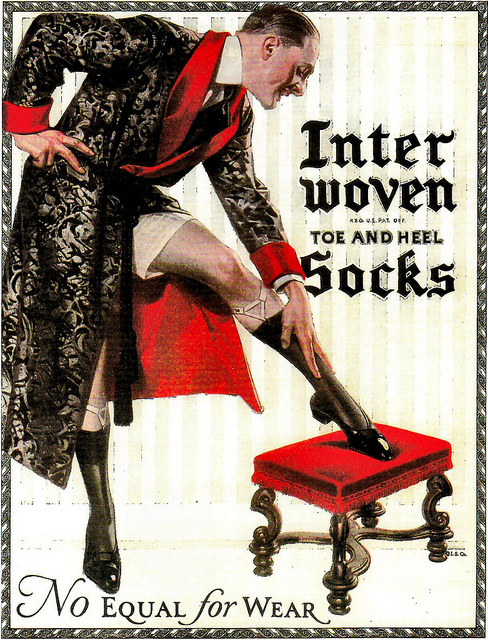 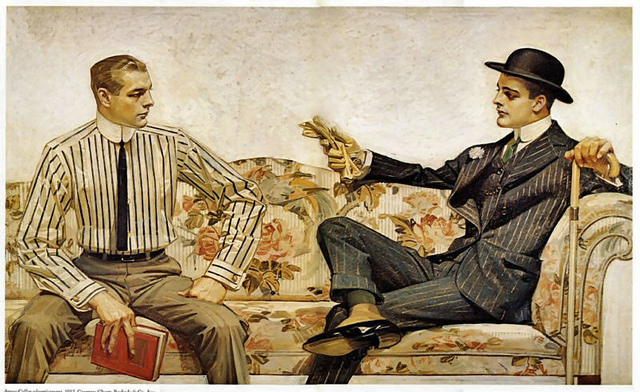 There is a wonderful collection of J.C. Leyendecker’s works in Newport, Rhode Island. The National Museum of American Illustration, housed in a gilded-era mansion on Bellevue Avenue known as Vernon Court, holds the largest collection of Leyendecker paintings in one place. The museum can be visited on Fridays, Saturdays and Sundays. Details at: