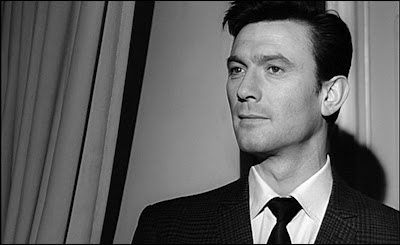 Film actor Laurence Harvey (1928-1973) was married three times, but he was actually a gay man who was trying to get the public off the scent of his true nature. His career stalled, and he did not become what anyone could call a major star. In spite of that, he got a lot of work, especially during the 1960s. Neither the public, critics nor friends said anything positive about his acting ability. He was in only one film that can be called a classic – "The Manchurian Candidate" (1962), with Frank Sinatra – but Harvey had little to do with its success.

George Jacobs, Frank Sinatra’s valet, wrote “Mr. S: My Life With Frank Sinatra,” a memoir in which he relates that Harvey often made passes at him while visiting Sinatra. Jacobs says that  Sinatra was aware of Harvey's sexuality but did not mind, passing it off as a joke: “He has the handicaps of being a homo, a Jew, and a Polock*, so people should go easy on him.”

*Harvey was actually born to a Jewish family in Lithuania.

British actor John Fraser , author of “Close Up,” also wrote that Harvey was gay, pointing out that Harvey’s long-term partner was James Wolfe, his manager who "discovered" Harvey in the 1950s. Harvey’s marriages to and dalliances with women were usually with females about twice his age. 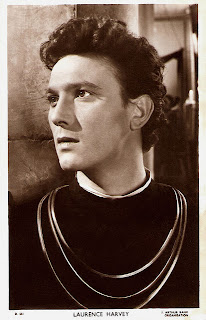 Laurence Harvey (photographed in 1954, at right) was a master of deception. While he maintained his entire life that his birth name was Laruschka Mischa Skikne, it was actually Zvi Mosheh Skikne. His Jewish family moved from Lithuania to South Africa when he was five years old, and while living in Johannesburg he took the name of Harry Skikne. While in his teens he served with the entertainment unit of the South African Army during WW II. After moving to London, he enrolled in the Royal Academy of Dramatic Art where he became known as "Larry." Dropping out of the academy, he began to perform on stage and in films, simultaneously adopting the stage name "Laurence Harvey." At last a name he liked.

Dame Judi Dench (currently appearing in Skyfall in yet another terrific turn as M) appeared on stage with Harvey in Shakespeare’s Henry V in 1959. She later talked of being bewildered at how Harvey never actually looked at her during his speeches. At the time, Joss Ackland was quoted as saying, “Americans seemed to think Harvey was some sort of great actor, which his colleagues certainly did not.” * Harvey was regularly dismissed by critics. In his posthumously published autobiography, “Knight Errant,” actor Robert Stephens described Harvey as "an appalling man and, even more unforgivably, an appalling actor.” He was often accused of being unprofessional, as many commented on the frustration that resulted from his chronic late arrival on the set. Harvey played out his career largely in undistinguished films, TV work and the occasional supporting role in a major production.

*Incredibly, Harvey received an Academy Award nomination for Best Actor for his leading role in "Room at the Top" (1959), a British film. Although he did not win, he was more or less type cast; he played a conniving, ruthless, heartless social-climber.

David Shipman wrote of Harvey in 1972: “Laurence Harvey's career should be an inspiration to all budding actors: he has demonstrated conclusively that it is possible to succeed without managing to evoke the least audience interest or sympathy - and to go on succeeding despite unanimous critical antipathy and overwhelming public apathy. His twenty year career of mainly unprofitable films is a curiosity of film history.”

Although the British-made film "Darling" (1965) was one of the earliest films to depict gay characters in a sympathetic light, the closets were bursting on the set. There was Harvey, of course, but also Dirk Bogarde, who although deeply closeted, was having an affair with director John Schlesinger. Bogarde, who carried on a 40-year relationship with his agent, Tony Forwood, invested considerable energy in trying to portray himself publicly as a heterosexual. John Schlesinger hoped that his friend, Roland Curram, might be inspired enough by his role in "Darling" to come out of the closet. Curram always insisted he was heterosexual and went on to marry and later sire two children. In 1985, on the occasion of his divorce and ultimate coming out to his family and friends, Curram stated, “Of course, John was right.”

Update from your blogger: I am aghast at some of the comments from my blog readers. This is not a personal attack. I am not "very young" (in fact, I'm close to retirement). I am certainly not antisemitic (I have been employed by a synagogue for 26 years). Before I wrote this entry for my blog about influential gay and bisexual men, I had known Laurence Harvey only as a second-tier movie actor, and his name was on a list of gay and bisexual actors. There are many gay and bisexual film and stage actors on this blog. But when I started to do research on Harvey, I was astonished at how much negative information had been written about him by those who worked with him during his film career. If you re-read this entry, notice how those comments are referenced and credited to those who wrote or commented about Harvey's less than charming traits. I have never met the man, and I have seen only four of his films. I have no grudge against him. I just related what I found out in my research on the man and cited those who wrote or spoke about him.

A scene from "The Magic Christian" (1969) in which Harvey recites Hamlet's soliloquy while stripping before an astonished audience (I'm not making this up):


Oh, I nearly forgot. Scottish-born actor John Fraser called Harvey "a whore" in his 2006 memoir, mentioned above. A very heavy drinker (for good reason, it would appear), Harvey died from stomach cancer at the age of just forty-five. He is buried in Santa Barbara, California, next to his daughter (by his third wife), who died at the age of thirty-five.

Trivia: In 1963, Laurence Harvey built a house in Beverly Hills (designed by Buff & Hensman) that came to have an incredible “gay” pedigree. Musical comedy composer Jerry Herman went on to own it, followed by Max Mutchnick, the co-creator of the TV hit Will & Grace. The 9,200 sq. ft. house was next sold to Ellen Degeneres, for $29 million in 2007. It was purchased six months ago from Ms. Degeneres by Ryan Seacrest (no comment, and nothing implied, naturally, but I do hear some choking noises off in the distance).
Posted by Terry at 4:02 PM