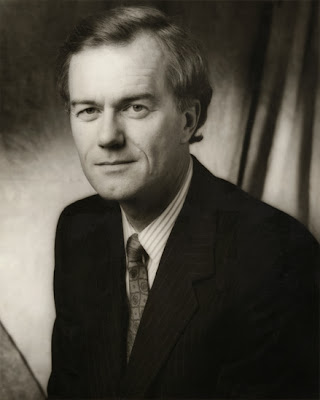 Republican politician, LGBT activist, philanthropist, business executive and film producer Michael Huffington (b. 1947 in Dallas, Texas) was born rich. His father, Roy Huffington, was founder of the natural gas exploration company, Huffco, and Michael served as the company’s vice chairman from 1976 to 1990. He married Greek-born socialite Arianna Stassinopoulis (of Huffington Post fame) in 1986, but by 1998 he was a divorced man with two daughters who had revealed that he was bisexual.

In a Time magazine article by John Cloud (December 1998), it was revealed that openly gay financial guru Andrew Tobias, an old Harvard chum, said he was the first person Huffington told about his sexuality, forty years ago. In an Advocate interview (2006), Huffington stressed that he is bisexual, not gay. He claimed that on the Kinsey scale (from 0 as totally straight to 6 as totally gay), he is a 4.

According to a 1998 Esquire magazine profile by David Brock, Huffington said he began dating men in the 1970s while working at his family’s energy company in Houston, but suffered guilt and depression over the relationships. An affair with one man lasted about a year, but Huffington also continued to date women. At one point he made a private vow to stop sleeping with men. The profile makes the distinction that Huffington is homosexual, but not “gay”. Brock wrote, "Gay means so much more, carries so much cultural baggage, and he's not that. The word gay just doesn't describe him. It really doesn't.”

In a 2008 New Yorker profile of Arianna, we learned that before their marriage Michael Huffington informed her about his interest in men. “In my Houston town house I sat down with her and told her that I had dated women and men so that she would be aware of it.”

During the 1990s Michael won a seat in the U.S. House of Representatives, where he served one term as a Republican from California. By just 1.7 percent of the vote he lost his subsequent bid for the U.S. Senate when Californians re-elected Dianne Feinstein. In the 2003 California recall election, Michael endorsed Republican Arnold Schwarzenegger instead of his ex-wife, Arianna Huffington, who was an opposing candidate. Although she withdrew before the election, her name remained on the ballot.

Since his coming out as bisexual, Michael has worked with various organizations such as GLAAD, GLSEN, the Human Rights Campaign, the Log Cabin Republicans, the Point Foundation and other groups to help educate Americans about gay, lesbian and bisexual people. Earlier this year Huffington was a signatory to an amicus curiae brief submitted to the Supreme Court in support of same-sex marriage during the Hollingsworth v. Perry case.

Huffington's philanthropic activities and commitments are varied and worldwide. A partial list of those organizations that he has supported financially and on which he has served on the Board of Directors include: the Aspen Institute (Aspen, Colorado), the Cathedral of St. John the Divine (NYC), the Culver Educational Foundation (Culver, Indiana), Georgetown University (Washington, DC), the Greek Orthodox Archdioceses of America (NYC), the Music Center of Los Angeles, the Natural Resources Defense Council (NYC), the Salzburg Seminar (Salzburg, Austria) and the University of California at Santa Barbara.

From 1991 to 2000 he was the co-owner of Crest Films Limited, a full-service film production company known for its Emmy-winning commercials, documentaries, and adventure films as well as its work on behalf of non-profit organizations. He produced or executive produced many award-winning films, including For the Bible Tells Me So, an insightful non-fiction film which was shortlisted for the 2008 Academy Award nominations for best documentary. Some of his other credits include Bi the Way, Dissolution, American Primitive, Grassroots and Father vs. Son. Huffington is also a producer of The Geography Club, a gay/bisexual-themed film that opens in limited release on November 15, 2013.
Posted by Terry at 2:54 AM