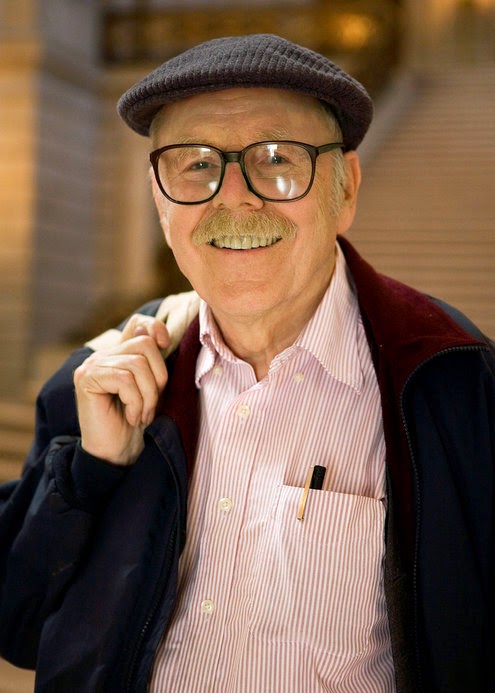 Openly gay San Francisco resident Frank M. Robinson (1926-2014) wrote science fiction novels, thrillers, magazine columns and political speeches. Born in Chicago, in 1973 he migrated to San Francisco, where he met Harvey Milk, the first openly gay American elected to a prominent public office (San Francisco city supervisor). Milk asked Robinson to be his speech writer, and Frank later found himself working on Milk’s famous “You’ve Got to Have Hope” gay pride speech: "We will not win our rights by staying quietly in our closets.... We are coming out to fight the lies, the myths, the distortions.... I am tired of the conspiracy of silence."

Frank became such a valued advisor to Harvey Milk, that Milk designated him as his successor in 1977 by way of a recording filed with Milk’s attorney (Milk was well aware of the possibility of his own assassination). Director Gus Van Sant persuaded Robinson to play himself in a cameo role in the 2008 film, Milk. When Sean Penn, in the role of Harvey Milk, stood in front of San Francisco’s city hall, just as Milk had done 30 years previously, Robinson was again in the crowd. “When I heard Sean say those words [almost verbatim] that I had helped write, I was so proud," Robinson said.

Unlike Milk, however, Robinson remained closeted for for many years for fear of not being able to keep his job or get new work. Little did the straight readers of Playboy magazine’s sex advice column (Playboy Advisor) realize that the columnist was a closeted gay man. Playboy had earlier published some of Frank’s fiction. Robinson also wrote for other magazines – Gallery, Cavalier and Rogue.

Three of his novels were made into films: The Glass Inferno (co-written with Tom Scortia) became The Towering Inferno (1974), The Power was made into a 1968 film starring George Hamilton, and The Gold Crew became an NBC miniseries retitled The Fifth Missile (1986).

Robinson was inducted into the First Fandom Hall of Fame (2001) for contributions to the field of science fiction, won an Emperor Norton Award* (2004) and received a Moskowitz Archive Award (2008) for significant achievement or contributions to Science Fiction/Fantasy/Horror fandom. He was named the recipient of the Special Honoree Award by Science Fiction Writers of America (SFWA) earlier this year.

*Google this award. Unbelievable back story.

Robinson died a few weeks ago on June 30, at age 87, following a long illness. A public memorial service will be held at 7 pm on August 8 in San Francisco.
Posted by Terry at 3:09 AM