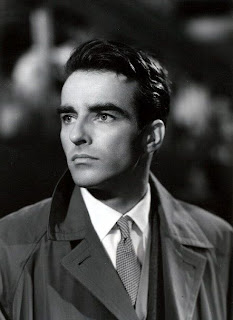 Movie star Montgomery Clift struggled his whole life with his sexual orientation. He once said, “I love men in bed, but I really love women!” Nevertheless, Clift had affairs with choreographer Jerome Robbins and fellow actor Roddy McDowall, who attempted suicide after his breakup with Monty.

He kept his tormented sexuality a secret from most everyone he knew – making discreet trips to Ogunquit, Maine, where gay men could have trysts without being noticed, then to Fire Island, which was a well-known gay getaway. He had a taste for S&M homosexual activity. Little was published about his homosexual affairs, and he was fiercely determined to keep that aspect of himself under wraps. In 1940 he had his first regular male lover, who was a fellow actor. In 1949 he was arrested on 42nd Street in New York for soliciting, but his film studio intervened to ensure that the charge was dropped without publicity.

Montgomery (Monty) Clift’s mother, “Sunny,” was herself the child of southern aristocrats, but had been given up for adoption. She married a rich stock broker and spent her life treating Monty and his twin sister to the privileged life she never had. As young children, the Clift twins were taken on tours of Europe and tutored at home, but more than anything, they were victims of a severely controlling and manipulative mother.

At the age of 13, Monty appeared on Broadway and took stage roles in New York for over a decade before beginning to appear in films. By the time he was in his late teens, he’d acted on Broadway with Alfred Lunt, Lynn Fontaine and Tallulah Bankhead. He earned excellent theatrical reviews and soon attracted the interest of numerous lovelorn actresses. While working in New York in the early 1940s, he met a former jazz singer and heiress to the Reynolds Tobacco fortune, Libby Holman. At 38 years old she developed an obsession with the 21 year old actor, financing a play for him. His relationship with bisexual Holman was likely the last heterosexual relationship of his life and caused him further anguish over his sexuality. 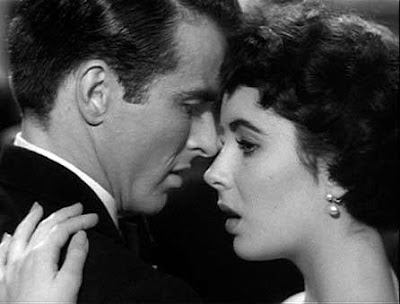 Montgomery Clift brought a new vitality and depth to his film roles. He was a talented, devastatingly handsome actor. When Elizabeth Taylor first saw him on the set of "A Place in the Sun," she said he took her breath away (see photo above and at end of post). Soon enough she fell in love with him, but her feelings were not reciprocated. He inspired Marlon Brando and James Dean, who emulated his naturalistic acting style. The characters Monty played on screen were lost, confused souls, a new, post-war image of the American male. Off-screen, he led a tortured life. His addiction to pills and alcohol and his complicated sexual identity have been widely publicized. Analytical books and documentaries place blame for Clift's psychological problems on his repressed homosexuality.

By the early 1950s he was exclusively homosexual, though he continued to maintain a number of close friendships with theater women. His movie debut was “Red River” (1948) with John Wayne, but his second film that year, “The Search,” is the one that brought real attention to his talent, and an Academy Award Nomination ensued (see clip below). He received further Academy Award Nominations for “A Place in the Sun” (1951), “From Here to Eternity” (1953) and “Judgment at Nuremberg” (1961), but never won.

A 1956 tragic car accident, in which he drove into a telephone pole after leaving a dinner at Elizabeth Taylor’s home, severely damaged his facial features, and plastic surgery could not fully restore use of his facial muscles. This limited his range of expression and hurt his self-esteem. Subsequently, Clift took mostly unglamourous roles, only worsening his damaged public image.

A lawsuit with Universal Pictures and growing addictions forced him into a four-year retirement in 1962. In his final years, Clift plunged more deeply into drug and alcohol abuse and wild sexual behavior. He was considered unreliable by studio bosses. Sadly, by the time his companion Lorenzo James found him dead of a heart attack at their home in 1966, he was virtually unemployable. He was 45 years old.

Montgomery Clift and Elizabeth Taylor (1951): A Place in the Sun 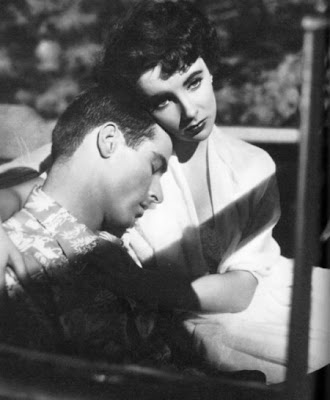 The Search (1948) In Post-War Berlin, Clift, who portrays an American private, helps a lost Czech boy, a survivor of Auschwitz, find his mother. In this scene, Clift (almost too handsome to watch) shows his finely honed acting chops. He won his first Academy Award nomination for this film.