Openly gay classical pianist Stephen Hough was born in England in 1961, although he has held dual citizenship with Australia since 2005 (his father was born in Australia). Hough holds a particular interest in unusual works by pianist-composers of the late nineteenth century, of which this video clip is an example. He plays with wit, charm, sophistication, humor, lyricism and generous doses of style. 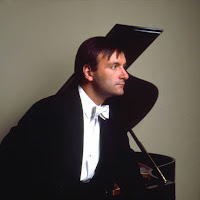 Hough also composes and arranges transcriptions for piano solo, and often features his own works in recitals. Of late he has branched out into chamber and choral music. As well, he is a noted writer and researcher, publishing essays and writing album liner notes. He is something of a renaissance man, fully indulging his interests in painting, photography and blogging.

Hough has recorded over fifty CDs, and in 2008 he won the sixth International Poetry Competition*. Hough has spoken, written and blogged about his homosexuality and its relationship to his music-making.

Instead of limiting what we know about him, as is the custom of most classical musicians, Hough is quite open about his weaknesses, about moments when he’s deeply questioned his career choice as a touring musician, about battling ego issues, fighting nerves, and overcoming moments when he says he fails to reach his own high standards. Hearing him talk so openly and honestly about his vulnerabilities opens many to his art. I am a pianist myself, and I regard Hough as one of the top pianists of our time.

*Excerpt from "Early Rose", a prize-winning poem by Stephen Hough

...To the garden, awake,
Tiptoe, quick, go
Slick-stairs down the
Steps to the pre-dew
Night morn before the
Dawn's birth is born.
Follow to the foliage where,
Hidden as the future's
Fall or rise, the rose –
Petals closed – will bud-burst
A billion atoms of beauty...
Posted by Terry at 12:47 PM